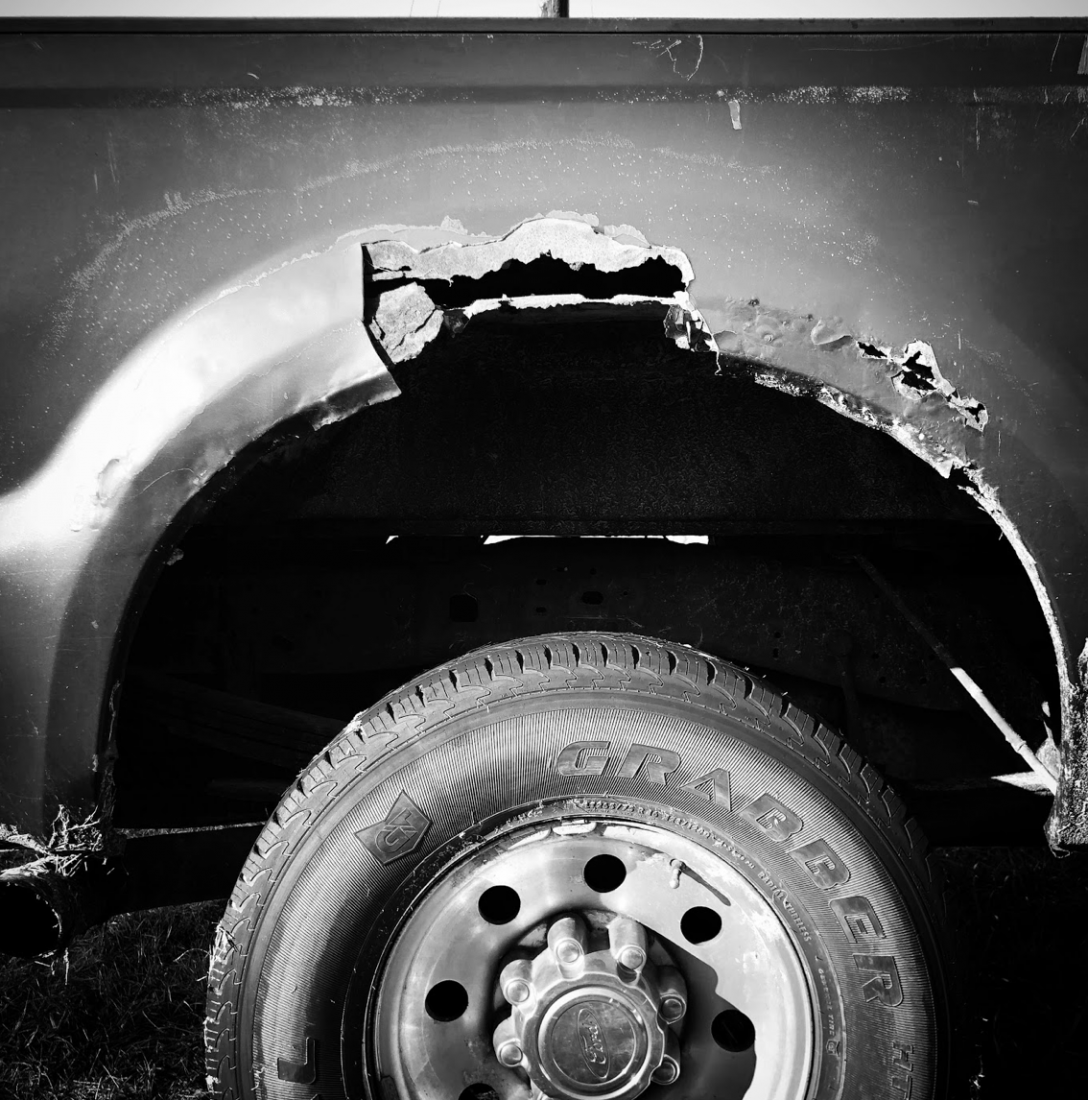 We sat in relative silence while we ate, save my father asking for a napkin when he spilled tomato sauce on his shirt.

“No. I changed my focus, remember?”

“But you love animals.”

“Kitty’s going to be the vet,” I said, losing patience. “I’ve been interning at an asset management firm and they offered to bring me on.”

“Asset management,” he repeated, chewing his crust. “Sounds made up.”

“Did you hear anything I said last night?”

“I heard everything,” he said.

He ate his last bit and clapped off his hands. “Anybody’s father would have trouble keeping up, you know. First it’s music, then it’s animals, now it’s ass management.”

“Asset,” I said, dropping the rest of my slice into the box.

“Sure, until you change focus again.”

“Where are you going?”

Returned with his guitar. “You still play? Go ahead.”

“I’m not playing your guitar.”

“Is this how you thank me for cleaning up?”

“Your strings are old,” I said.

“They won’t tune, you need to change them.”

He checked the neck of the guitar, squinted at me. “Forgot how to tune?”

I swallowed the urge to yell.

“Who taught you guitar, huh? Who bought yours?”

He tried and failed for a minute. “Fuck’s the matter with this thing?”

I cleared the pizza box to the kitchen. “I wonder.”

“Not a thing,” he said. “You replace strings when you break them.”

“Hold on, let me write this down.”

He shot to his feet. “Get your shoes on.”

“Where are my keys?”

He turned half-circles, around and around where I’d been sitting. “You went and got the pizza,” he muttered.

“Which you’re going to pay me back for.”

He leveled his eyes, wavered a bit, then snapped his fingers. “Get in the truck.”

“Where are we going?”

“You want to drive,” he said, stomping toward the fridge, “better not scratch it.”

He drank not one, not two, but three beers in the passenger seat, gunning through them as though I planned to take them away. He barked directions one at a time, often too late to make the required turns.

Finally, we reached our destination — a shopping mall we’d been to countless times before, could have reached without his piecemeal shouting. I backed into a space, he chewed me out for showing off.

His beer escaped as he got out of the truck, crashing to the pavement in a firework of glass and froth. He stepped over like it was intentional, stalking off before I’d killed the engine.

I followed him inside to a music supply shop, which had its gate drawn and an Out of Business sign posted.

He shot me a glare. “Another one we can try.”

“Not up to you, though, is it?” he asked, loud enough that shoppers turned to look.

Outside, the street lights began to pop on.

“Whatever,” I said, as we reached the truck. “I’m driving us home.”

“You will not,” he said, slamming the driver side door shut with his hand.

“What are you doing?”

“You will go exactly where I tell you.”

“I really don’t want to deal with one of your obsessions right now.”

“You get drunk and you fixate. You never let anything go.”

He righted himself, said, “I’m not drunk.”

I tried opening my door, he slammed it again. I took a breath, tried to control my voice. “Let me take us home.”

“You know nothing,” he said, starting to slur.

“Get in the other side.”

“You’re alive because of me.”

“Right now you got your job and your woman and your whole goddamn bliss parade,” he said, leaning into me, breath thick and sweet. “But it’s all going to end someday and what are you going to have left?” He stood tall, raised his arms. “You’re looking at it.”

I threw them hard as I could — over his truck and the all-purpose gas suckers beyond it, hard enough that the muscles in my arm started to buzz. They landed out of sight with a metallic splash. My father glared at me a long moment then hobbled to retrieve them. He gruffed and groaned, searching the ground.

“I’m not letting you drive,” I said, after he returned.

He started the engine.

“Seriously,” I said, stepping in front of the truck.

He revved the engine.

He scowled at me through the windshield, a million miles away, then shifted into reverse and backed up over the concrete parking block.

My father spilled out and circled to survey the damage.

“What is the matter with you?!” I shouted, chasing after him. “Do you like being like this?” He steadied himself against the flatbed. “I came to share my good news with you, and it’s the same old shit.” Wilting, there before me. “Nothing changes. Your women change and that’s it.”

My father — small and getting smaller.

He managed to raise his eyes.

“All my life,” I said, “I have watched you inflict this hurt on others. I have tried to be a better man. I’ve tried to make up for you but the shit you cause is beyond repair.” I glance at the truck, back to him. No reaction. “What do you expect me to do here?”

He looked away, toward a mother piling her kids into a minivan.

“I have defended you,” I said. “No matter what you did. And most days? It felt like I didn’t exist.”

“I was never supposed to raise you,” he said, quietly. “You chose your mother.”

Above us, the first star shone through. “I was six.”

“Still. Worst day of my life. Come home, family gone.” He tried to right himself, failed. “You chose to live away from me. Then, she got sick, and… back you came.”

Out of habit, he checked his hand. No drink there.

“I knew pretty fast,” he said, slowly, “that you’d made the right choice. I could never be enough.”

With effort, he reached into his pocket and handed me his wallet.

I glanced inside. Stomaching the courage, I asked, “Why do you have Mom’s photo?”

He looked at me with the same questioning look as ever. “Because she’s the love of my life,” he said, “and you look just like her.”

I walked back to the mall for a payphone. Frank answered on the second ring. I said, “This is Wiley’s son.”

A small market stood by the exit. Sure enough, they sold Arrogant Bastard.

My father was asleep on his feet, I gave him a gentle shake. His eyes lit with a fire as we cracked a couple open.

He looked proud. “Next we’ll get you started on bourbon.”

Frank arrived, towed my father’s truck to the garage, and transported us home. The three of us shared a round in the backyard, the big elm swaying like a shy dancer.

A silence fell after he left. Bootstrap joined us, taking up residence on my father’s lap. The guitar stayed inside where we’d left it.

“Why did you stop playing?” I asked.

He drank down his final sip. “I saw how quick you picked it up, how good you got. Didn’t see much point anymore.”

I handed him the half-bottle I had left.

We sat with the stars a bit, now in full bloom.

I said, “You should pick it back up.”

The next morning, he was asleep again in his favorite chair. I packed my mother’s quilt. Scooped Bootstrap his breakfast. Made a strong pot of coffee.

At a low howl I played a record by Edith Piaf — a song for moving on, letting go, wiping away the past.

My father stirred. We exchanged good mornings. Then, he retrieved a beer from the fridge and flipped the cap into the sink.

I nodded, allowing myself one look around the place I used to call home.

He crossed toward his chair, thought twice about sitting, picked a piece of lint off the back. “Stores on that road sell about sixteen different kinds of shit, ask me.”

I shot him a grin. “Everyone needs shit.”

He noticed a boot of his lying on its side, reached down to right it.

“Still owe you for the pizza.”

I found the other one, set it beside the first. “How about you get next time?”

He nodded and we shared a man-hug, three pats to the back. For all his would-be bulk, he was just bones underneath.

I lifted my bag onto my shoulder. “You’ll get an invitation from us, about the wedding.”

“Her parents offered to host it.”

My father nodded. I turned to go. At the door he stopped me. “Nolan?”

“The fire dies when you stop asking questions,” he said, hiding his free hand in a pocket. “Understand?”

The big elm came down a few years later. Airborne disease that couldn’t be fixed.