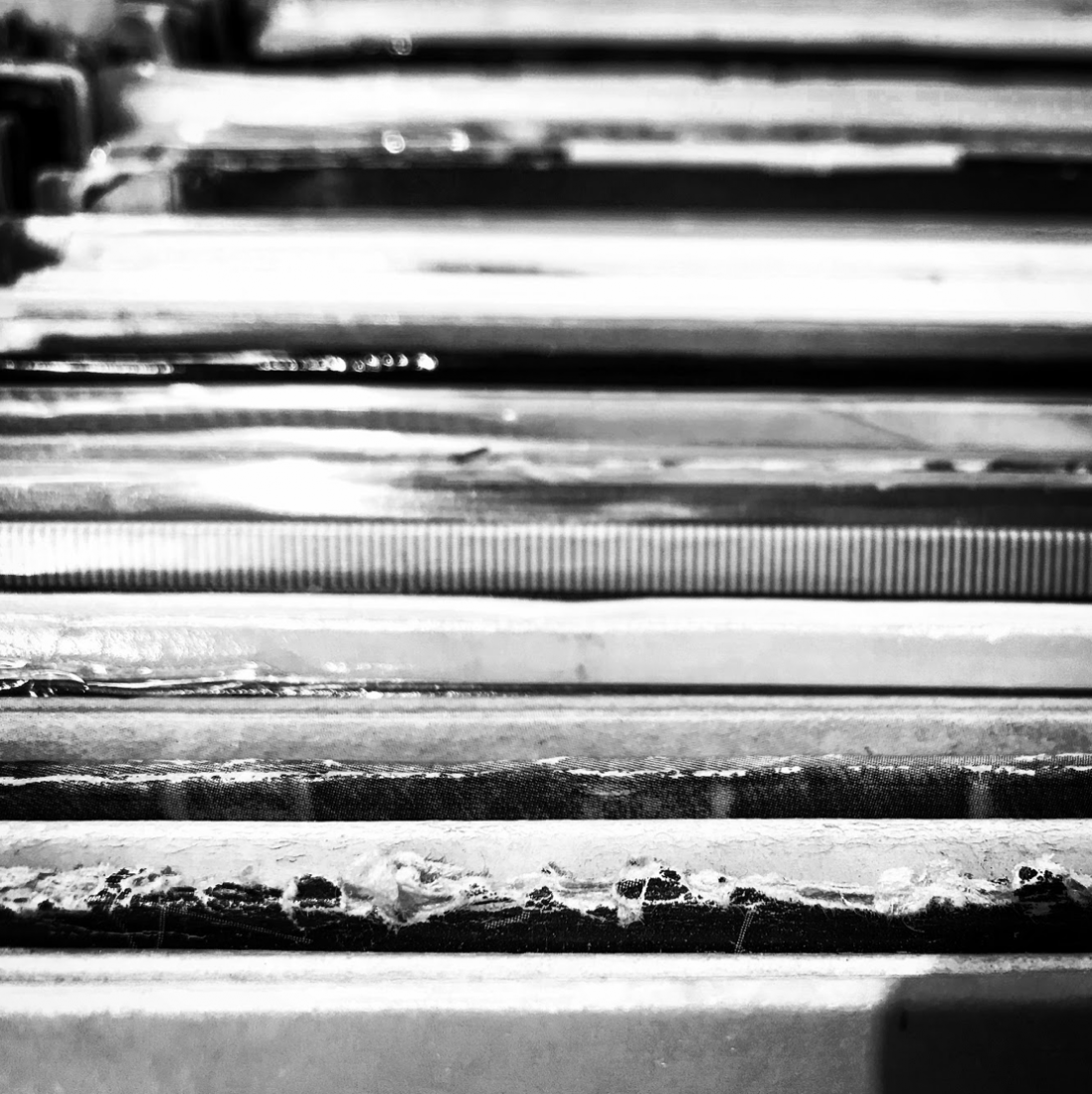 I spotted the Johnny Lee Hooker record midway through one of the smaller piles — only sixty or so, stacked horizontally. For all the love my father put into acquiring his collection, he was shit at care and maintenance.

Back to the living room. I played the record’s B-side first to get my fix — no use standing on ceremony. Hooker’s riff summoned a late night blues bar filled with smoke, two regulars locking eyes across the floor, deciding to act on what’s been building between them, what they’ve known all along.

He pulled himself off the couch. Exposed his belly reaching for the ceiling. Collected a beer from the fridge. Flipped the cap in the sink. “Good choice of a record.”

It was an excruciating process, him getting ready. Aspirin. Long shower. More aspirin.

“You spilled your beer last night,” I said.

He scoffed and grabbed a different sock from under his chair. “Use a towel next time.”

Second beer in hand, he made a beeline for his truck. “Took the weekend off the garage, but they got a check waiting on me at the office.”

“You’ll know when I’m not sober,” he said with a wink, as though it were a standing joke between us.

Frank — his on-again, off-again employer for over a decade — greeted me with a meaty handshake while my father got sorted. “Blessing and a curse,” Frank said, “seeing the young grow up. How long you here for?”

“Leaving tomorrow,” I said, watching a busted-up car get raised on a lift.

“You should come back more often.” He nodded toward the office. “Means a lot to him that you’re here.”

Next stop was the diner, where the wait staff never seemed to change. My father ordered a Bloody Mary with rye toast and bacon. I got coffee and a toasted blueberry muffin. My father’s M.O. was never letting on when he was hungover, merely rolling on to the next day’s revelries. I watched him nibble and drink and drink some more. We left after his second bloody, half the toast left on his plate.

He grew frustrated with his car radio — a standard AM/FM. If one were to ask why he had never bothered to upgrade — music-lover that he was — odds were he would have answered, “I’m not fancy.”

“Whole thing’s a racket,” he said, unable to dial through the static of a certain station. “Spend half the year asking for money and they still can’t get a signal.”

The car in front of us stopped short.

He hit the brakes, both of us lurching forward. Then, he turned again to the music.

“Hey, there we go,” he said, pulling into a parking lot. “Forever since we’ve been here.”

The bowling alley hadn’t changed either — for all I knew, the shoes they handed me were the same ones I’d been wearing since I was twelve

“Come on,” said my father. “Your old man’s going to kick your ass.”

We entered our names — him adopting the name Dick — and set about choosing our balls. Without fail, he told the same joke that he always told. (Consider the difference in size and weight and you’re likely there already.)

He bowled a gutter on his first roll, turned around grinning. “Gutters or strikes and nothing in between.” His second roll was also a gutter.

“Still waiting on those strikes,” I said, as the pins got changed.

A few frames in, he disappeared while fetching beer. I found him chatting with the bartender — the human embodiment of a rat.

“Sorry,” said my father to the man. “Got my son with me. Catch up another time.”

The man followed me with his eyes. I steered my father back.

Back at our lane, I asked, “Friend of yours?”

My father picked up my ball instead of his own. “Just a guy I know,” he said. “Worked as a roadie for Billy Idol, back in the day.”

“Doesn’t mean his roadie’s a piece of shit.” He rolled my ball into the gutter — there was an audible pop as his fingers exited the holes. Lifting his beer, he added, “Man has a liver the size of Michigan.”

One frame blended into another. His smile grew bigger, the more he swayed. I waited for him to ask me more about Kitty, anything about Kitty. He never did.

“Why are we here?” I asked, when he started a second game.

He looked at me like I was a math equation. “What are you talking about? You love bowling.”

“When I was twelve, maybe.

“Why don’t we cool it a sec, alright? I’m just trying to show you a good time.”

I considered leaving then and there. Why not? My one agenda for the weekend was dead on arrival.

He downed his beer, said, “You want to go home, we’ll go home.” He tossed his ball a final time down the lane, the pins erupted and fell. “Hey, look at that,” he said, walking past me.

“Where are you going?” I asked.

I changed out of my shoes and waited for him. A kid’s birthday party took over the lane beside us. Singing and smiles and cake.

Finally, I tracked him back to the bar, where he and rat man were sloshed to the gills.

“Hey,” my father said, noticing me and pivoting back. “This’s my ssson…”

After twenty minutes, I was able to pry him away from his friend. He handed me the car keys without argument. I wasn’t sure whether that was a good sign or a bad one.

He was dead weight, dragging him into the house. I dropped him in his chair and he began snoring immediately. I checked the clock over the fridge — surely lunchtime in most households but here the battery was dead.

I dialed Kitty’s house. My future father-in-law answered. I gave him a rosy version of the visit thus far.

Once Kitty got on the line, I said, “He did not disappoint.”

“Between sleeping and drinking, we might have shared a few lucid minutes.”

“What did he say when you told him?”

“That marriage was a trap.”

“Well,” she said, “that’s the way I always saw it. Convince him the same way you convinced me.”

“Oh, and by the way? The trust my mother left for me went to snack packs and notebooks, apparently.”

“So we save a little longer,” she said.

“I should have known he’d screw things up.”

“It’s probably better if we do it ourselves.”

The clock ticked the same second, over and over again. “I wish you weren’t so high maintenance,” I told her.

I grinned, falling in love the way I did every time we spoke. I asked her how she was spending her day and she refused to tell me, prompting me to chase the information out of her. Finally, she admitted that she was rewatching Purple Rain and eating peanut M&M’s.

“Not the party-sized bag?” I asked.

Extended silence, listening to each other breathe.

“Maybe your father’s nervous,” she offered.

“Why would he be nervous?”

“You’re grown up. You found somebody. You got offered a great job.”

“I haven’t told him about the job.”

“Yeah, but you haven’t needed money since graduation.”

My father farted in his sleep — a long drawn out wheeze. I cracked the kitchen window.

“I still think I should have come with you,” she said.

“Can I meet him before the wedding?”

The sink. The floor. The damp, stagnant air. “It doesn’t feel like home here.”

“Your unbridled enthusiasm is kind of overwhelming,” she said. “I’m starting to regret proposing to someone who’s so overly happy all the time.”

I smiled, shifting a stack of used plates across the counter. “I should figure out lunch.”

“When’s your shift over later?”

“Well, have fun with the vampires, Kitten. I’ll be sleeping with the rest of the world.”

I got off the phone and took a moment watching my father across the room. Bootstrap nuzzled against my leg, offering a meow of solidarity. I unearthed his cat food from the cabinet-slash-disaster zone and freshened up his water bowl. Gathered the dishes scattered about the room. Filled the sink with soapy water. Before long, the countertops were scrubbed, the kitchenware was spotless, and I’d restarted the lackluster dryer cycle for the clothes I’d arrived in. I loaded my father’s laundry into the washer. Swept the floor and hunted for a vacuum that apparently no longer existed.

Enough was enough. Lunch wasn’t going to manifest from nothing.

In a move that signaled my prospects as a pickpocket, I managed to withdraw his wallet without waking him. It contained precisely two dollars, as well as a photograph of my mother.

The tires on his truck were splashy. I turned onto the backroads and opened all the windows. Maximum cross breeze. Overshot the pizza parlor. Found myself at the old school. Gazed across vacant summertime windows. Nostalgia. Relief. Regret. I had no desire to go back but it felt like a death, that part of my life being over.

He was awake when I got back, transfixed by the state of his place. “You do this?”

“Don’t know what you’re talking about,” I said, setting the pizza box between us. I’d got us a large with sausage, peppers, and onions — his favorite.