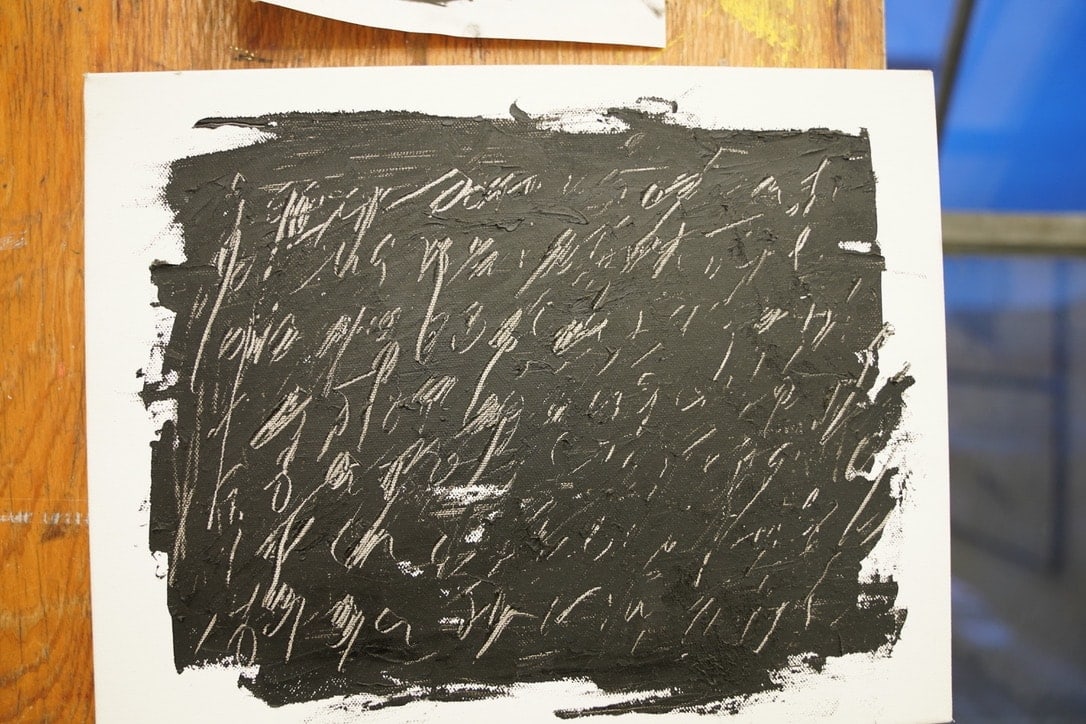 Work by Maria Pavlovska, pictured at her studio in MANA Contemporary, where Hell, Probably launched

Pairing poems with paintings is an intriguing (if imperfect) science that can involve unlikely collaborations, which hopefully produce transcendent art. Thankfully, such is the case with Hell, Probably, the new joint effort by poet Ronna Lebo and painter Philippe Avignant — brought together by the curation of their publisher, Dallas Athent. The result is a bracing poetic collection of Lebo’s vividly rendered recollections and surreal warnings for an era of feminine resistance and political awareness, which flow past Avignant’s wide-eyed caricatured denizens of a whirling dimension of necessary madness.

For instance, the lines of the book’s opening poem, Hoosier Scooter, are set beneath a portrait of a screaming figure whose normal mouth in plated shut — yet, whose tongue-flaring wail escapes from an unnatural maw erupting from the side of their face. The poem’s content seems staid by contrast, until you notice the increasingly brutal honesty about the Americana nature scene the writer observes on her Indiana road:

hello new corn you look bountiful
hello giant pines you look green and beautiful
hello Canadian geese happy crappy destroyers of peace you look beautiful
hello big turtle headed all wrong way your faith won’t fit a long fast trip
hello fat hog your smile says you’ve eaten whatever you stole
hello scrawny dog running the ditch you are un-fed and beautiful
hello milkweed no monarchs to feed you smell like beauty
hello cow clatch clumped and touching the storm hasn’t yet made you lie
hello snake side-winding on the road you are creepy and beautiful
hello bald eagle you are arrogant and blind to all but the soft bodies you hunt
hello enormous blue t-boning the gray and straight the only end is forward
and through.

Lebo’s dynamic life experience is harnessed to greatest effect in the book’s title poem, Hell, Probably, dedicated to New York City punk music and fashion icon, Richard Hell. A teenage mother in Indiana in the mid-’70s, Lebo later came to New York City, and took on the musical art persona of Alice B. Talkless — performing with her sister, Amy Mayhem. Today, she may be a grandmother, but Lebo remains heavily involved in creative endeavors as co-founder of non-profit small press imprint Black Square Editions, and operator of Reservoir Art Space in the Ridgewood section of Queens, which has hosted events for both painters and poets. With all of that (and more) on her life CV, two mid-poem stanzas from Hell, Probably feel like Lebo’s poignant assessment of finding poetic inspiration in the past… and its mixed results:

At his reading people were dead, a course so unlikely — forever when you think about it, nothing complete actually — the rest of the past already gone with those few lines, for obvious reasons, like we guessed it, kind of, but not because it works.

It is infuriating. It takes everything out of you — all the ins and outs swept, blown, no appeal heard and time… Then again maybe one could milk the smart thing spilt generations ago, right? Some kind of ice-cream licked by words, a contribution to the culture maybe

Hell, Probably is one of two new books published via the Catopolis imprint of At Large contributor Dallas Athent, along with Prospero Vega’s poetry/photography book, The Lucy Boys. Athent previously wrote about her affinity for the book’s painter in a September 2016 At Large article, The Importance of Philippe Avignant — which recalls their first meeting during Greenpoint Open Studios:

It’s not until I enter the studio of Philippe Avignant that I really see paintings that speak to me. There was nothing but his work on the walls. No music. No snacks. No promotional materials. In one painting, dark characters lined themselves at a table. Their faces varied in expression. A Bishop was involved. There was a cop. A ghost smiled. They all appeared to be gambling. Mediums of spray-paint, acrylic and pen were used to define grit. This is real life. This is art.

I introduce myself to Philippe because I’m floored by his paintings. He nods quietly and thanks me profusely for understanding what he’s doing. I tell him I want to help get his work out there. People need to see this, really see it. I’m not that important, but I do have connections, and art like this is what I live for. He said he would love to have shows because it’s rare he gets to share his paintings with the public. Months later I invite him to attend a group show my own work is in in the East Village. To thank me he makes me a 6×4 ft custom painting and brings it to the event. I unroll it and fall in love all over again. Little figurines of pizza, syringes, pills are peppered in the background of two men. A black sun looms overhead. It is the most special gift I’ve ever received.

The creators of Hell, Probably’s artistic collaboration appeared together at the book’s launch on January 27th at the MANA Contemporary studio of artist Maria Pavlovska — who herself previously collaborated with Athent on the 2017 poetry/art release, Theia Mania, via Lebo’s AntiSentiMental Society imprint. The event’s invite noted that Hell, Probably‘s poems “describe the dark lives of souls in America, from everywhere including Indiana to galleries in New York City. Avignant’s illustrations give faces to the truth.”

Lebo’s voice for Avignant’s faces erupts with the poetic urgency of that unnatural second mouth in the book’s opening painting, and is well worth focusing both of your eyes on.