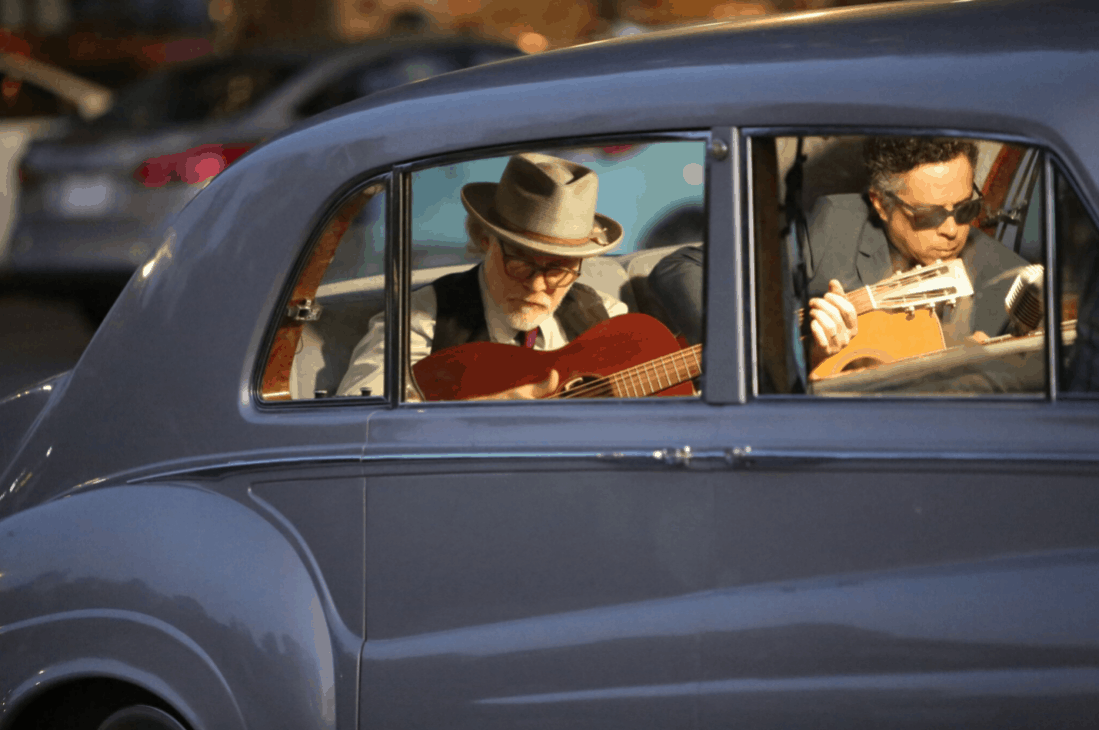 Love him or hate him, Elvis Presley pioneered the cross-branded artist. As the creature of pop culture, Elvis was the recipient of all things not worth worshiping yet he sang from a depth of pain and loneliness. He married a soulful sound to a back-beat (the rock in rock-n-roll) native to his Tupelo, Mississippi black community and added his own lip curling swagger. Elvis who initially won the genetic lottery of physical beauty died from an accidental drug overdose, fat and on the toilet at the age of 42. At the end, his beauty was no longer irresistible, but his charisma was undeniable. Americans are fickle folk, we fall in and out of love with movie legends, rock stars and one hit wonders but our relationship with Elvis Presley is more than half a century old and it is fraught with complications. Filmmaker, Eugene Jarecki takes us on a cross country odyssey in as unamerican a vehicle as the one that ironically represents for Americans the ultimate in status—a car fit for a king, Elvis’s 1963 Rolls Royce trying to unpack the emotional investment that crosses generations in seeming perpetuity.

One of the reasons that you must see The King is for a lesson on what cultural appropriation is not. Americans love to throw jargon around and we don’t have a clue as to what it means. Reason number two is that James Carville is in it and holy crap, I wish I could write like that man talks. He said that America never tasted the same after Elvis Presley hit. “He hit so hard he changed the way America tasted.” Chuck D. (Public Enemy) will teach you the most about reframing the narrative of cultural appropriation. Hint: it isn’t white people singing black music. He credits the Beastie Boys (three white Jewish boys) for bringing in Public Enemy in the 80s. Chuck D. says, “Culture is culture and culture is meant to be shared.” He points out the absurdity of people being any more upset about white people singing black music than black people playing classical piano (no German ancestry required). Van Jones—If you don’t know who he is, he is a voice of reason in America and worth watching television (CNN) with commercials for. Sam Philips had a vision of rock-n-roll breaking down the walls of segregation, but he knew it was too much to ask white southerners or even white Americans to change their minds about black music. Philips was pretty sure he could change their taste. He needed a white man with a “negro sound” and more importantly a “negro feel.”

Once upon a time, Elvis dropped a demo reel off at Sun Records and 18 months later scored an audition with Sam Philips. Philips underwhelmed thought the kid was just another wanna be Sinatra. Until—and this is the delicious part, keep in mind Elvis is a skinny 20-year-old kid; it’s late at night and he starts messing around and sings, That’s All Right (The link is the 1968 comeback special version which is an actual video and not a YouTube montage.) Philips stops him. Elvis apologizes, and Philips is over-the-moon because he has found his musical soulmate. That’s all Righthits the radio on July 20, 1954 and is a huge hit and sells over 100K copies. In a radio interview Elvis is asked about what it feels like to be on top and he says that he’s afraid to wake up sometimes because he’s worried that it may have all been a dream.

In 1955 there was only one white station playing so called black music. Elvis grew up listening to black music and going to black churches which is where he learned how to sing. Here’s a little rock-n-roll history for you: Hound Dog? It wasn’t written for Elvis. It was written for Big Mama Thornton by two Jews who were into R&B for a black woman, who does right by it, but it isn’t a hit. Enter Elvis who does his version and it blows up. (It’s fun to watch both videos.) 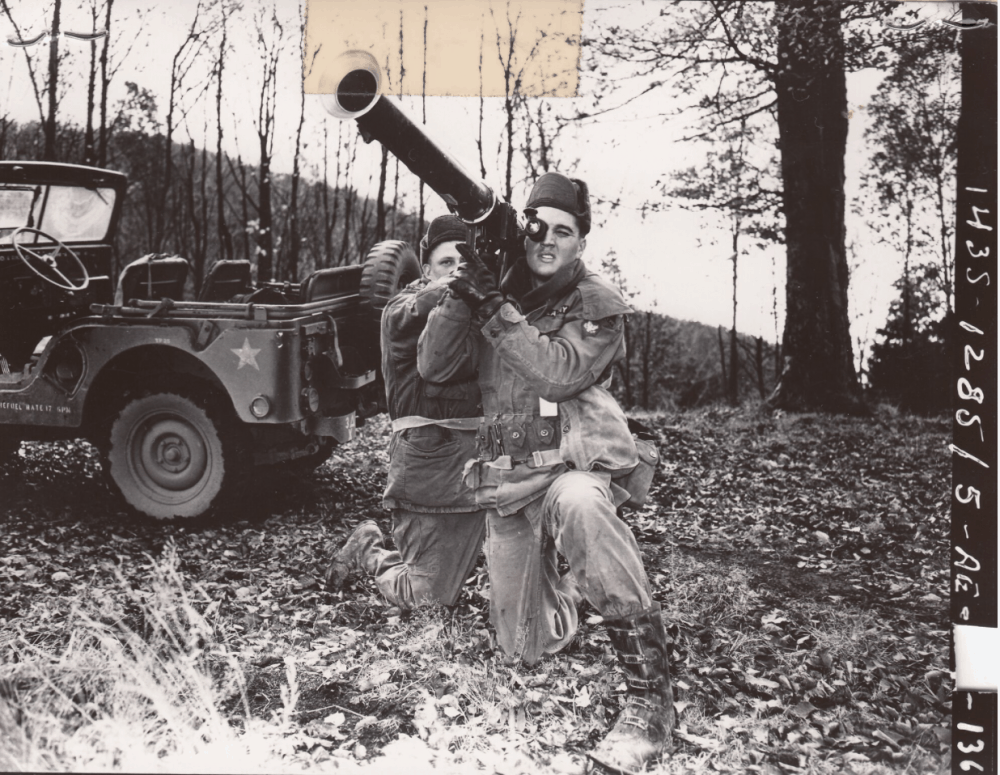 Mike Myers, who represents the Canadian perspective says, “Celebrity is the industrial disease of creativity.” He’s basically questioning why we attach the value of fame to creative people. I’m starting to wonder about those crafty Canadians, they gave us Marshall McLuhan (The Medium Is the Message) who along with Myers solved the mystery as to how we got a reality TV star to be president of the United States.  I apologize for my myopic female gaze to Ashton Kutcher—the man is more profound than he is pretty.

The premise of the documentary is that the director Eugene Jarecki got in Elvis Presley’s Rolls Royce and went on a road trip trying to figure out why the country is still fascinated by Elvis and if he is presently relevant or worthy of the prolonged fame. Along the way, he alternates between interviews out of the vehicle with cultural icons, time in the car traversing the US on Route 66 with passengers like Ethan Hawke (also a producer of the film) and Alec Baldwin talking about their relationship to Elvis’ legacy. We meet members of the original band who played with “The King” a child blues singer, EmiSunshine (she bookends the film in terms of talent riding in the car) duos, trios and an ensemble from Stax, a Memphis Academy for Soul, Blues and Gospel music of teen soul singers taking a ride in the backseat of the Rolls, people in middle America and even a few hitchhikers. Worth mentioning that the Rolls has been tricked-out like a mini sound stage and the acoustics are tight.

The person who I keep going back to is Chuck D who seems to know more about American history than the majority of the current Supreme Court with the integrity to match. He is not an Elvis fan, but he doesn’t begrudge Sam Philips. He said that Elvis was “the right person to sell and market to a white country.” Remember the lyrics in Fight the Power? “Elvis was a hero to most, but he never meant shit to me.” The link takes you to the full version of the song. Really listen to the words, Chuck D is saying that “Our freedom of speech is freedom or death
We got to fight the powers that be.” Think about that line in the context of 1989 and now almost thirty years later in 2018 those words are not a call for anarchy but an appeal to be stewards of our constitution, to be good Americans.

The thing is, Elvis could have been a voice in the civil rights movement. Marlon Brando marched alongside Dr. King. Jane Fonda met with the Black Panthers. But Chuck D. raps on, “Straight up racist that sucker was/ Simple and plain…” Among many things Public Enemy takes offense to is America’s anointing Elvis as King. For a country determined to live without a monarchy to bestow a title that historically exists by birthright and not by merit seems democratically tone deaf. Why were BB King, Dr. King, Chuck Berry, Harry Belafonte or Mohammad Ali who believed in America and said he would go to jail for his freedom not equally deserving of the title? Consider what Chuck D says. “We make film, we make music, we do art. Those are the three things that governments want to control.” 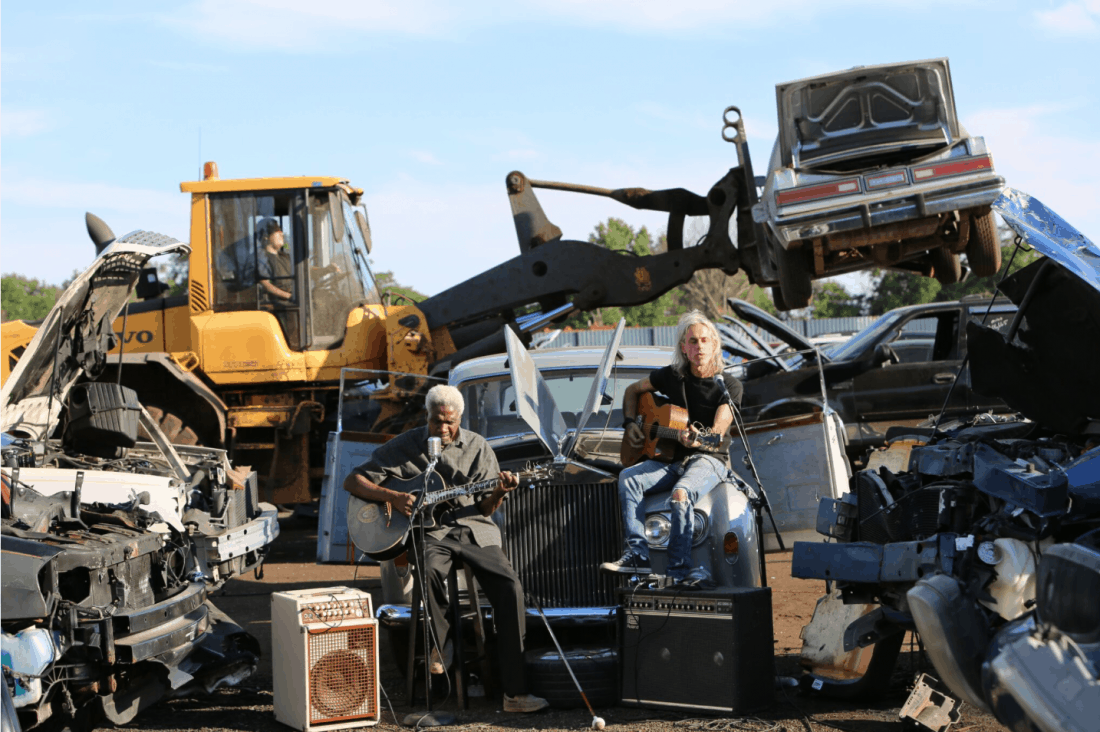 Is America presently a culture or a society failing? Is the more than half-century obsession with Elvis Pressley indicative of an empire in decline? Ethan Hawke questions, “Was Elvis ready to be in a world where everyone’s watching?” Hawke says, “The power used him. He became the creature of pop culture, [it] made him the recipient of all things not worth worshiping.” The words: The recipient of all things not worth worshiping are somewhat ironic coming from a celebrity but not unexpected from Mr. Hawke who has never been afraid to challenge the constructs of Hollywood.

There are many theories as to what led to Elvis’s overdose of prescription narcotics. Some believed he was introduced to them in the service though his use of sleeping pills was not a secret once he began performing in Las Vegas for forty day stretches. As Vegas was the site for early nuclear testing it is said to be “the radioactive mutation of capitalism.” Others call it, “the most pure and honest expression of our society. The only thing that counts is money.” Elvis helped clean up the image of Vegas as a mob run city to a corporate run enterprise with the influence of course of the colonel. It was Tom Parker who wanted to go to Vegas instead of Elvis going on tour to Europe and Japan for the reason that he was an undocumented immigrant without a US Passport and he had a gambling problem. Elvis literally sang for his money. The colonel made a fifty percent commission as Elvis’ manager. Industry standard is fifteen percent. Which is why what Alec Baldwin says towards the end of the film is so poignant: “America is great when America does great things. What is the US but a standard of living?” I mean, how much money did Elvis really need to be happy?

Where to see The King