State of the Union

State of the Union – An Interview with Nick Hornby 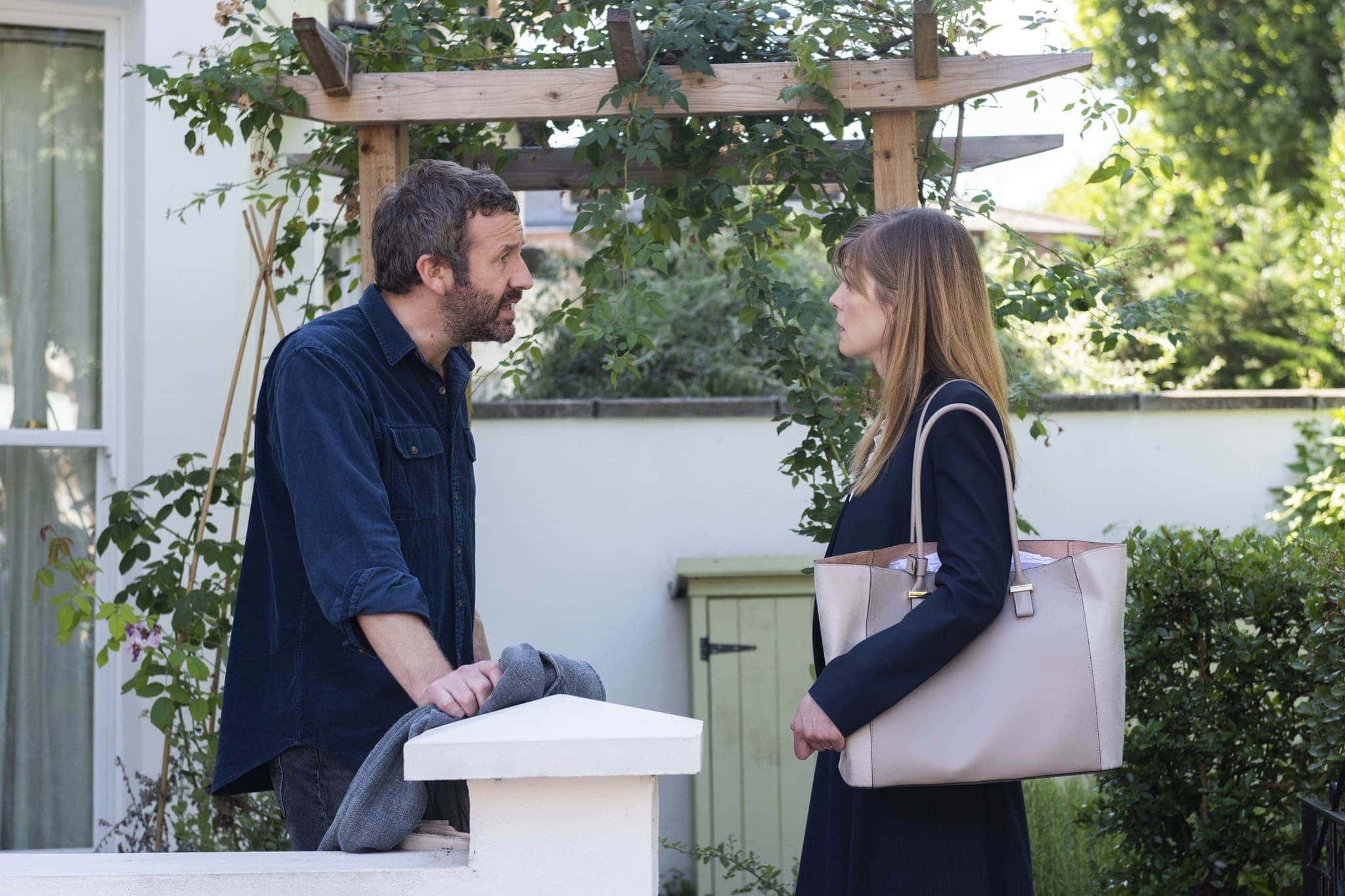 For the record, I’m a closet binge watcher but I suggest exercising some self-control and do as the director, Steven Frears (The Queen, A Very English Scandal) intended and consume State of the Union in two-episode doses. I can binge watch with embarrassing tenacity and beg of you to slow down! So, what makes the AMC Sundance Chanel State of the Union different than any other relationship comedy besides the obvious? It’s written by Nick Hornby (Brooklyn, An Education); stars Rosamund Pike and Chris O’Dowd; directed by British filmmaker, Steven Frears; the format— ten-minute episodes that take place in real time.  I swear I spoil nothing at all—the couple is undergoing weekly counseling due to “a spot of infidelity.” They’re trying to figure out if there’s anything to save and how they got to a spot of infidelity in the first place (hers not his).

Hornby who if you have read any of his books or essays, watched his films or listened to him on This American Life (if you haven’t, run don’t walk) you know that the artist has a lot to say and the agency to say it. To my American ear, English when spoken by British people always sounds so much better than my 1980s Valley Girlesque clunkier version of it. Hornby tells stories about everyday life events that to some may seem sad (so what) if not pushing the edge of distasteful (they are not) and wickedly funny to those of us who experience the misfortune of living through oh so familiar circumstances without the benefit of  Trumpian hubris. Pretty much the best thing about chatting with Nick Hornby is that he makes it so easy. I asked him to tell me what he wanted people to get out of State of the Union and he’s a pro. I just had to shut up and listen. I guess what hit hardest was the idea that marriage is not between two people. Marriage is a character unto itself. I got hung up on the idea of treating marriage like it is always in a permanent crisis, which is what couples counseling is really all about. Nick mentioned that one of his friends burst into tears at the line, “love without feelings.” My only regret was interrupting to ask other questions. (All I did was muddle it up.) He had it. It’s not like he had prepared talking points about State of the Union. Hornby is a platform fluid storyteller. 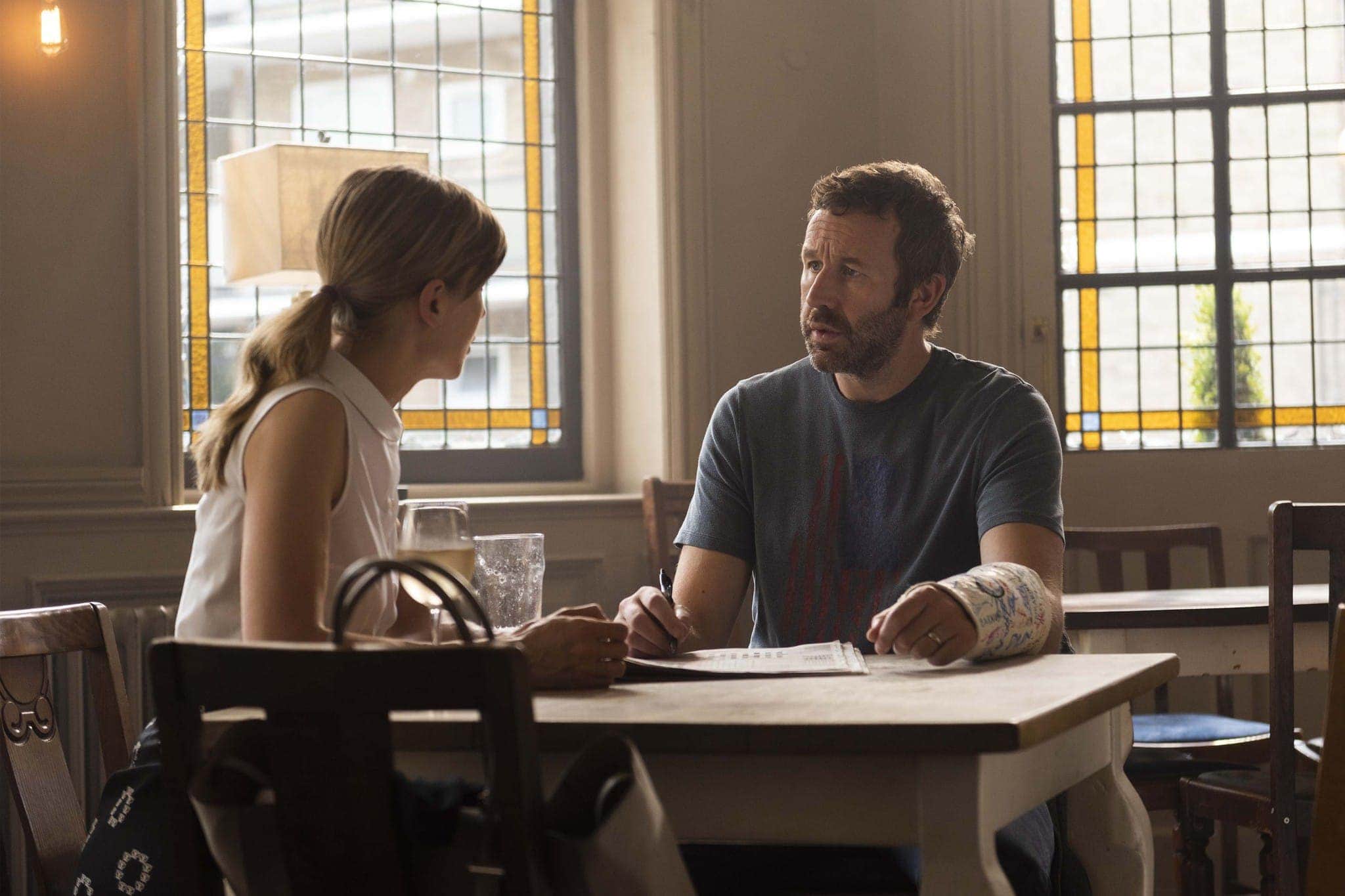 On marriage as a character

I wanted to try and write about marriage as if it were in itself a character, that it’s something created between two people which isn’t really within their control. And you know every day that you live with someone introduces a complication of some kind, a problem of some kind, a miscommunication of some kind. And then after you know ten or 15 or 20 years, you’ve got this kind of knotted mass that you’re probably never going to be able to unpick.

On the casting and creative process

There wasn’t much else to it apart from me and a producer who’s a friend.  AMC Sundance, who paid for it, obviously they wanted actors that are a certain level. But that was fine because we wanted actors at a certain level as well. And Rosamund [Pike], I’ve worked with on the film An Education about ten years ago. And she had a comic part in that and I thought she was brilliant. And I’ve had this desire to work with her on something else ever since there. And she’s a neighbor and a friend and she’s someone I see quite a lot. So it was, you know, a joy to be able to say, you know, “I’ve got something. Will you be able to do this?” And to know that it was actually going to happen this time. And Chris is someone I’ve known just through the last couple of years really, particularly through Juliet, Naked. 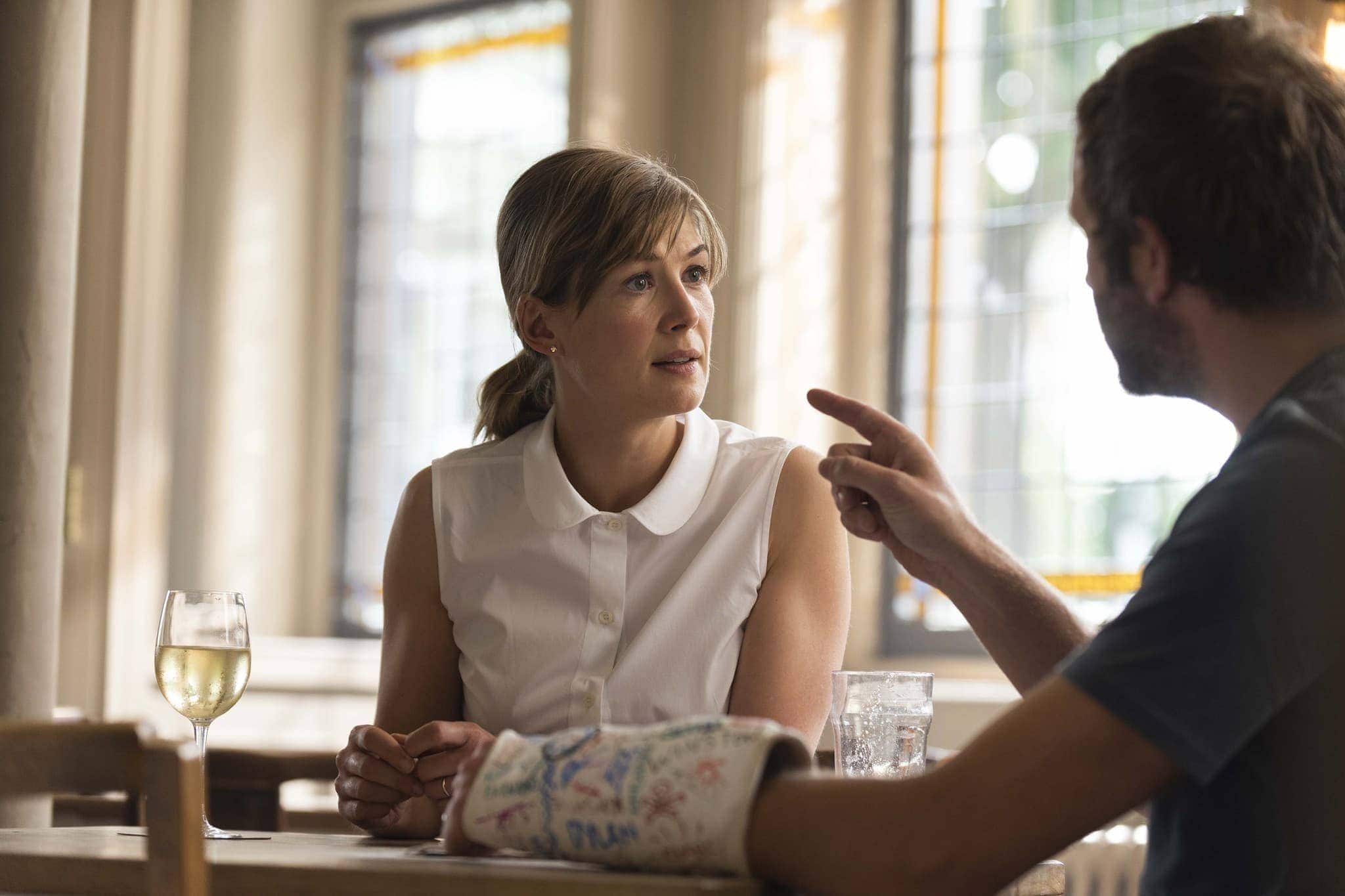 On running in real time

Well, I’d had this idea of wanting to write about what happens immediately before a therapy session some time ago. And it wasn’t until there were a couple of things in the air, like High Maintenance on Vimeo and … what’s it called? It’s a mogul’s name who’s trying to do a load of ten-minute things. Anyway, it was sort of in the air and thought, “Oh that’s an interesting format.” And I didn’t put the two things together for a while. And then I had some time, you know, I wanted to write but I was waiting for lots of other people to do things. And I thought, “Oh maybe I can try and see what it feels like to write ten minutes.” And you know, it felt good. It was a good discipline and it made perfect sense for that idea because it’s bound by its own timeframe. So, it wasn’t like I was sort of having to contrive the ten-minute episodes. That’s just literally what they do. And it runs in real time.

On a few hours versus a few years

So, it felt fun to write and it felt like an organic idea, where everything fits together. And then it was kind of hilarious because it turns out if you write a ten-page script, everybody reads them really quickly. Like they read the first page and then they go, “Oh there’s only another nine. I might as well read it now.” And so, you know a couple of times I heard back from people within like four or five hours of sending them an email, which was just fantastic because usually, it can be like three years.

It’s all about momentum

So, it felt like it had energy behind it as well, in a way that so many film projects, it’s hard to keep the energy going. But the moment anyone had space, then they were all in for it. And you know it’s three weeks of their life and they’re big parts and you know people have taken some notice of it as well. So, it feels like a really good thing for a film.

It could be worse

Yeah, well it’s … I mean, if you’ve ever gone anywhere at the same time every week, whether it’s for your own therapy or some kind of appointment, you often wonder about the people who are in before. And I wanted to find a way where they could actually see them. And of course, they can project on them. You never know quite what’s going on with the other couples. But it gives them an opportunity to compare and contrast.

I didn’t even think about going in actually. And I never had any drafts where they were in the therapists’ office. Did you ever watch Cheers? I always liked that you never saw Norm’s wife but he talked to her on the phone. I think I stole that from Cheers.

It’s fun seeing what’s good about the format. You’re not spending all the time as a filmmaker thinking, “Oh my God, am I missing all these things?” Because actually, it’s about their faces as much as anything. And it’s not necessarily butchered by being watched on a smaller screen.

And as someone who has been chasing each precious moment of being spellbound in darkness like some elusive high, it’s a blast when something like State of the Union works.

State of the Union will be rolled out on multiple platforms simultaneously, including its “10@10” debut on SundanceTV starting Monday, May 6 through Friday, May 17, where a ten-minute installment will be released each weeknight at 10:00 p.m. ET.

State of the Union premiered as an official selection of the 2019 Sundance Film Festival and screened at the Tribeca Film Festival on May 4.