Hit the road in a Zegna Edition Maserati 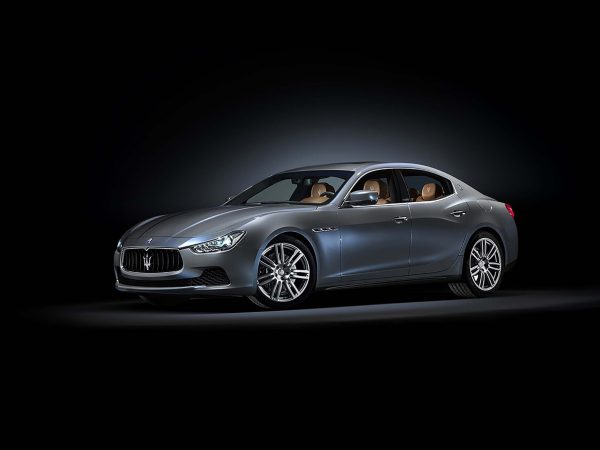 Two years ago, Ermenegildo Zegna and Maserati marked the centennials of their respective companies together, collaborating on a limited-edition Quattroporte. Originally released in an edition of only one hundred, the executive sports sedans were in immediate demand. Now, the Zegna-edition Maserati is in production on a larger scale, with more silk, options, horsepower, and, for some lucky journalists arriving in Italy for an international media test drive, more time at the wheel.

When the president of Ermenegildo Zegna, Gildo Zegna, approached Maserati CEO Harald Wester about outfitting a Quattroporte in silk, Wester says, “I thought, Is the fashion industry nuts, or is it just this family?” From an engineering perspective, the challenges of putting silk in a car are substantial. Seats need to withstand the rigors of hard driving, temperature changes, and UV rays while remaining compatible with massage controls, ventilation, and other variables. Which is why they’re generally upholstered with heavily treated leather and tough synthetics, not the stuff of soft hankies.

“The work was ours to do,” admits Zegna CEO Paolo Zegna. They would produce the fabric at their factory, and Maserati would test it, a process Mr. Wester sums up in unsophisticated terms. “We took a dummy and pushed it against the seat two hundred and fifty thousand times. When ten percent of that process was finished, there were more holes than silk.”

Zegna’s R&D eventually got the formula right, using specialized chevron stitching, loads of leather trim, and scaling up the weight of the silk. The figures here are telling: A single men’s suit typically requires three meters of silk at 150 grams per meter. Maserati’s upholstery, which includes door inlays and sun visors, takes twelve meters of Zegna silk, each at 300 grams. So how does it feel? Like upholstery. After all, it’s not a pair of knickers. And it’s not meant to be. You’re sitting in a machine capable of punching a 200 mph hole in the air. If you want sensation, stomp on the gas. Zegna adds its history and pedigree to the experience. As Wester explains, “We are not just selling cars. We are selling prestige, and Italian luxury.”

The Grand Hotel Des Iles Borromées sits at the edge of Lago Maggiore in the Italian hillside town of Stresa, a fitting setting for period films and postcards, and also our rallying point. From here, a dozen journalists will test drive the Zegna-appointed Quattroporte and Ghibli. After a safety review by Alex Fiorio, an Italian World Rally Championship driver, I’m handed a key and pointed in the direction of what would be, for the day, my car. First stop: Ermenegildo Zegna’s factory in Trivero, an hour’s drive if you follow the rule of law.

“The directions are in the navigation system,” says Fiorio.

Turning onto Piazza Marconi from the Borromées parking lot, the Ferrari-built V8 engine, flying through second and into third gear, screams bloody fire.

The maximum speed on these Italian highways is 100 kph, but the law doesn’t limit how fast you can reach it—or take the corners. The Quattroporte turns like it’s got claws and a tail. And so, despite missed exits and a hard time with an Italian-language automated toll, I arrive at the Zegna factory much earlier than forecasted.

Casa Zegna is as charming as it is industrious. Ermenegildo Zegna’s house still stands nestled amongst the quarter million trees the eponymous founder planted after the mountain was stripped for wood fuel and grazing lands. Behind the archive showrooms, acres of factory floor hum with production. Today, Ermenegildo Zegna is a leading fashion house; 95 percent of its business is in apparel. But it started off a century ago spinning the world’s finest wool into textiles. Touring the factory, it isn’t hard to imagine those early days, as giant machines feed on bales of merino wool, sending delicate sheets of gossamer and incredibly fine threads out the other sides. In another room, threads are woven into fabric, half of which supply the Zegna line, with the other half going to outside vendors, such as Tom Ford. There are no apparent next-gen touches: no robotic arms, no giant LED screens. There is the oily smell of machinery and the barnyard scent of fleece. The floors are full of workers absorbed in their craft. Even the illumination is surprisingly old school: shed windows in the ceiling cast northern light so that colors can accurately be judged. Modernity here is subtle, much of it in the techniques Zegna has pioneered, from color-blending fabrics to reflect more light, keeping suits brighter and cooler, to perfecting high-performing silk upholstery.

A quick lunch at Il Bucaneve, Zegna’s hotel restaurant in the Italian Alps, and I’m back on the road. It has begun to storm the way it only can in the mountains: suddenly sunny for fifty-foot stretches, then cracks of thunder and sheets of blinding rain. The sure-footed Maserati adds to my confidence navigating sheer-faced drops. The view from the edge, overlooking the reforested Alps, is breathtaking, but so is driving the road ahead, about an arm’s length of it visible from one turn to the next. Still, I’m making good time toward my next stop.

Arriving at the Balocco racetrack is like pulling up to an airport: vast expanses, trees lining the horizon, a security checkpoint, and, beyond that, the sound of engines revving. In any direction you look, a ribbon of asphalt shimmers in the continuing rain. Originally built by Alfa Romeo in 1962, it was bought by Maserati’s parent company, Fiat, in 1987. Today, these are the Maserati proving grounds.

This is where I part with my car-for-the-day. No sooner have I turned in the key than I’m asked if I’d like to test the GranTurismo MC, Maserati’s two-door, street-legal racecar with seating for four. Zegna has no involvement here. This is a bonus for we city dwellers who’ve spent the day admiring lush Zegna interiors, listening to the thrum of V8 engines, and sending small thrills up our legs in 5.2-second 0–100 kph spurts. This would be the full catharsis: a taste of the beast’s awful potential.

I’m led into the passenger seat. Driving will be Fiorio, our Rally champ. I am to experience the limits of this machine on a closed course.

“It would be better if there was no rain,” Fiorio says.

“Faster,” he specifies. “In the tires there is oil.” The entrance to the Langhe track is approaching, we’re in second gear, and the engine sounds ready to erupt. “When it’s warm, the tires they stick. But when the track is wet …”

Fiorio drops his foot and, lo, there is sound and physics.

Speed may provide the one genuinely modern pleasure, as Aldous Huxley said, but it’s the stopping that makes it worthwhile. Happily, even on wet pavement the Maserati brakes hard enough to make your ears clap. The tires seem to peal up the tarmac as they bank through a series of turns and hills. I learn, in the throws of our joyride, that I’ve always taken the seatbelt for granted, considered it a mild annoyance. But it’s a necessity during hard driving. Without it you’d be shook loose. Fiorio, staring over his knuckles, calmly explains down force and lateral force variation—the tricks beyond gravity keeping the car stuck to the ground. Then it’s over, and, straitening my tie, I’m delivered to a reception of coffee, fruit, and pastries.

That morning, in the Hemingway Suite at the Hotel Borromées, Harald Wester and Paolo Zegna had elaborated upon their collaboration. It’s more than family names and centennials: it’s a shared vision of luxury. “If you went to an important event,” Zegna said, “and you saw another man with the same tie, that could be a disaster.”

“The real desire,” Wester followed, “is to have mine. That’s the direction the luxury world is moving in: yours.” With more color finishes and personalized items, Zegna adds an historical background while putting a proprietary spin on a marquee car brand.

While production on the Zegna-edition Maserati has been scaled up from those original one hundred cars, Wester isn’t worried about a risk to its exclusivity. “There’s no way you’re going to leave your house one morning and see in traffic a long row of Maserati,” he said.