A non-organization of non-members 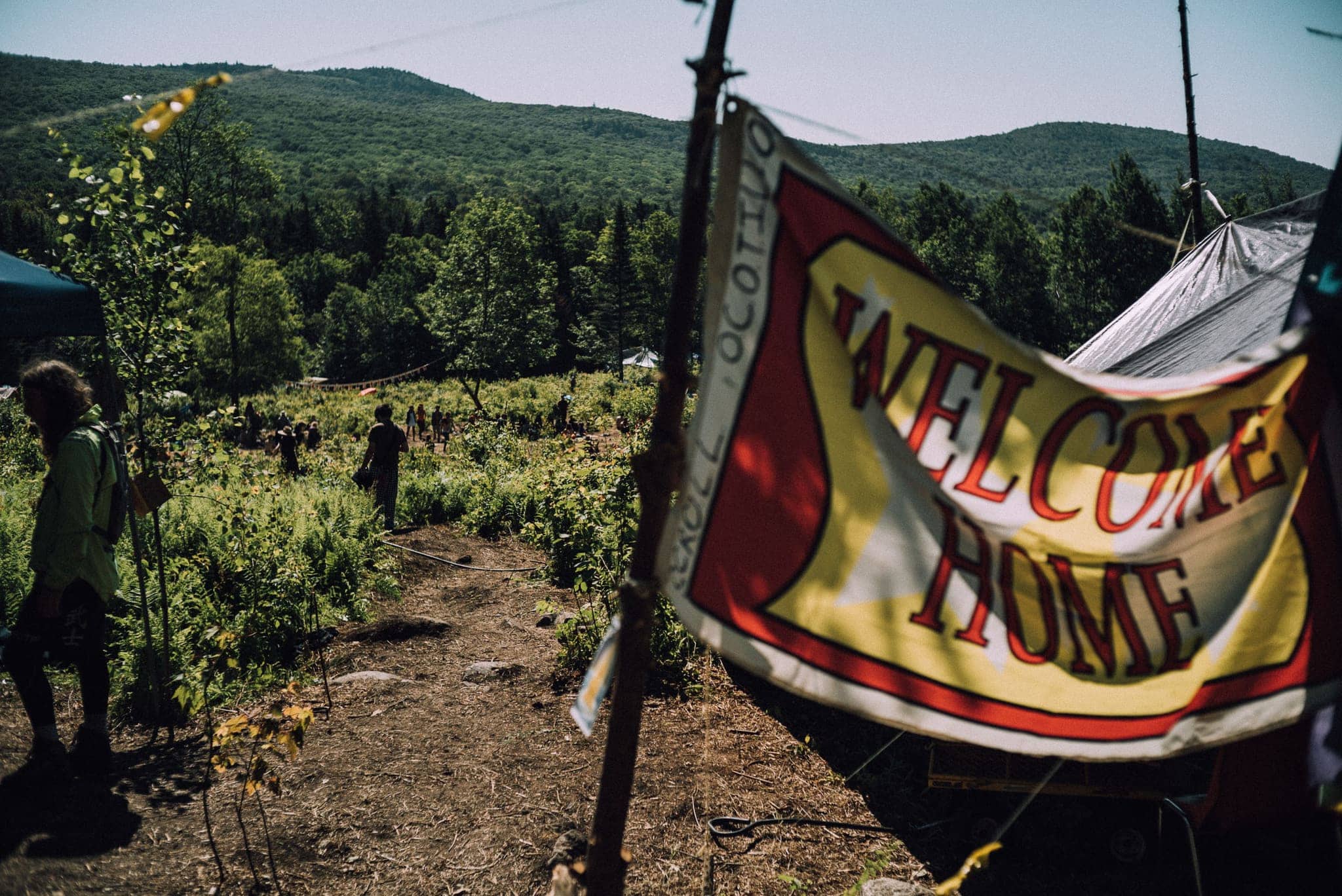 Sign at the entrance of the gathering. Along with “loving you” you hear “welcome home” more than any other credo while strolling thru the woods among strangers.

The annual “Rainbow Family of Living Light Gathering” took place in Vermont this year. Founded with a utopian vision of life after the apocalypse, Rainbow is an event that attracts people from all walks of life—it’s a mix of Terrence Malick’s “Days of Heaven”, George Miller’s “Mad Max”, and Woodstock ’69.  You don’t need money, you don’t need to bring food; everything is taken care of. Miraculously it works, for those few days at least. Photographer Reto Sterchi spent four days in the woods there, documenting people and happenings. The Rainbow Family is a community, or as they say “a non-organization of non-members”, gathering several times annually in locations spread over the world, celebrating counter culture, alternative lifestyles, non-violence, and Peace & Love & Planet Earth. 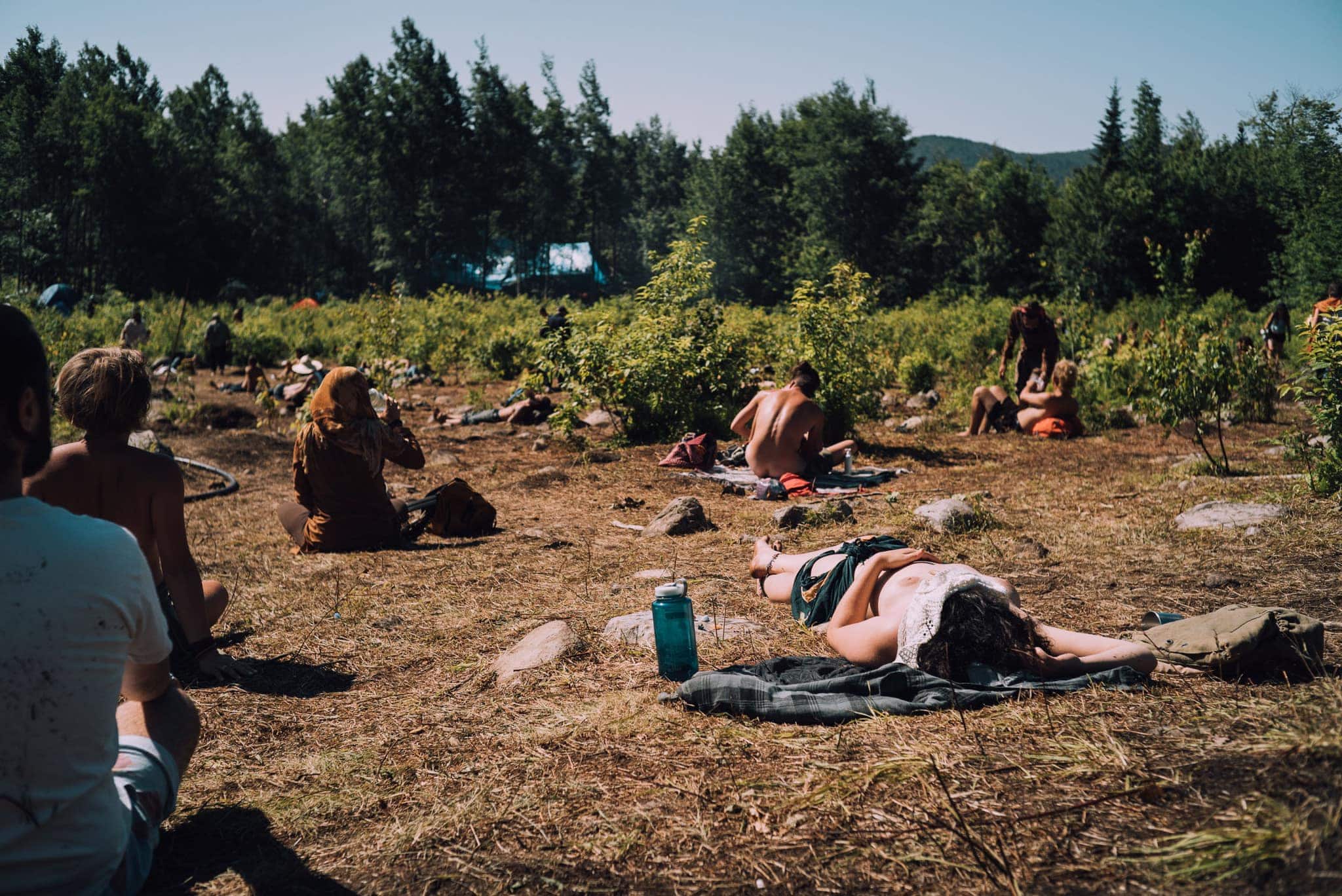 I get everything I need for free.
These boots came from the factory
dumpster on the far side of town. This hat
was moldering on the kitchen floor
in the foreclosed home I picked through.
This coat, this backpack, this brand-
name headlamp. I got this cornmeal
behind the grocery store, this flat bread
behind the bakery, this french press
in the alleyway next to the coffee shop in uptown.
This bible in a bum camp, this banjo
in a trashcan, this headless mannequin
in a free-pile outside Honest Ed’s Antiques.
The British call it skipping.
The Brazilians call it living, call it vida.
Vida que surgi de nada. Life out of nothing.
I bike past the butcher’s on Pike
and find a bag full of pigs.
None of them whole. A few sets of hooves,
a half torso, two heads, another head
with no nose, a leg, a pile of coiled tails |
slowly uncoiling like white worms
taken out of a hole. Most of it going
musty, the muscle falling away
from the fascia, the skin drained of color
and feeling like withered pumpkin.
But some of it might be good.
A pair of milky gloves is clumped up
and tangled among the little hairless tails.
I dig them out. I blow to check
for holes. I begin sorting the pigs. 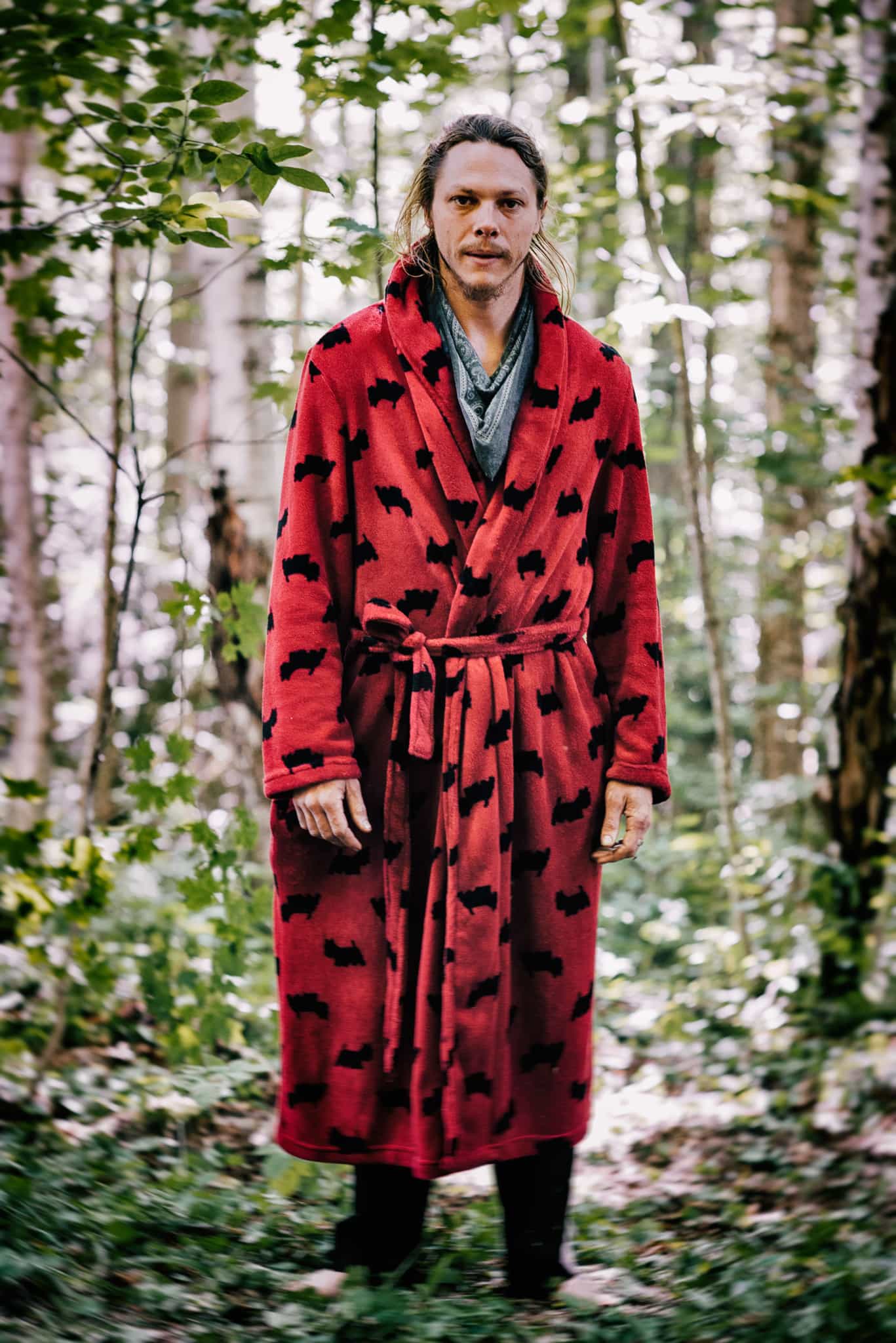 As a “Babylonian” from the outside, I assumed this man was part of the core group of gatherers. Much to the contrary, he said: “No man, I don’t know what the fuck is going on either.” 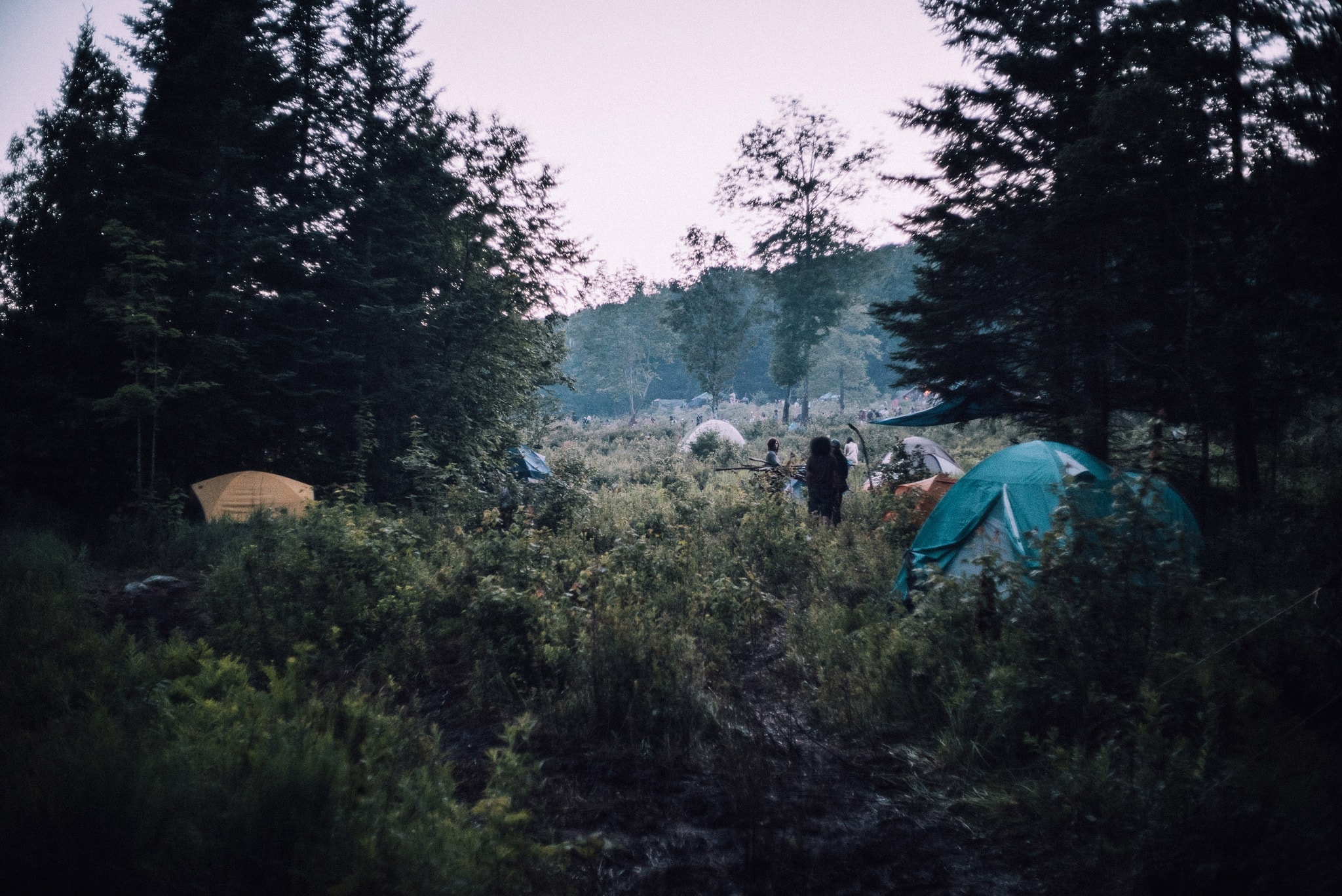 It is possible to show up to the gathering without anything except a bowl and a spoon. Most people do pitch their own tent. 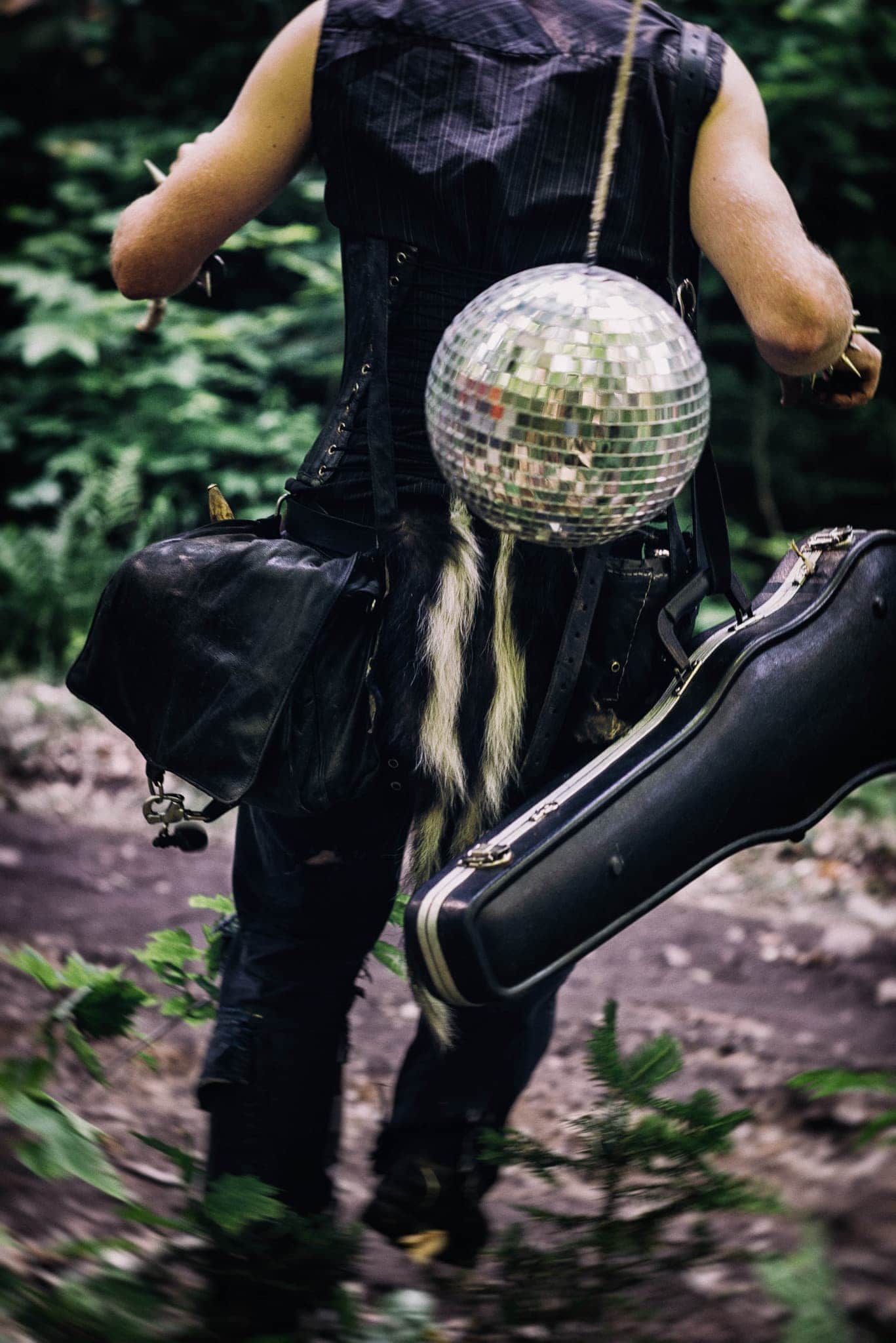 This guy judged the photographers outfit (jeans, boots, T-shirt) as “Babylon clothes”. Babylon is everything outside the gathering.

Nothing you’ll find more orphan than the heart.
The dim mission of its reptile-eyed insomnia,
its nameless drive, its bulging catalytic beat.
The night sky wheels with the same fever, as if thrown
from a bowler’s hand with english on it. Orion.
Ursa Minor. You cannot constellate desire anymore
than you can braid cord from the tongue’s sinewed utterance
of a name, a name hallowed at night into the wind,
the wind tethered to the earth like flame to black spruce,
quartered and four years dried. Beargrass. Monk’s Hood Lichen.
Methuselah’s Beard. Old Man on the Mountain.
You take your bearings by a belt of pulsing stars.
You turn to reckon with the one that doesn’t move.
Polaris. Dog’s Tail. Leiðarstjarna. Nail. Mismar 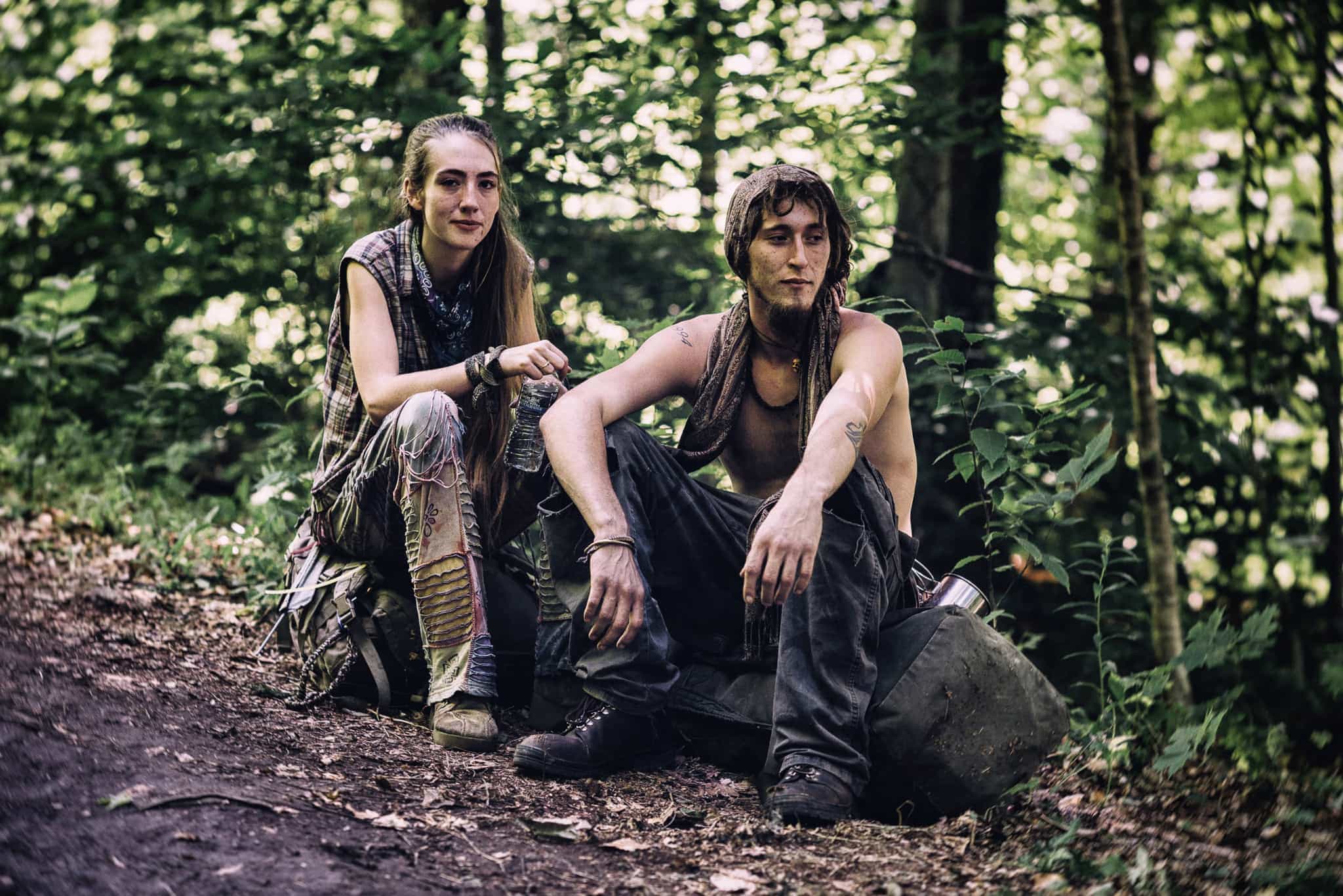 I met people who hitchhiked and train-hopped their way  across the country in order to participate in Rainbow. 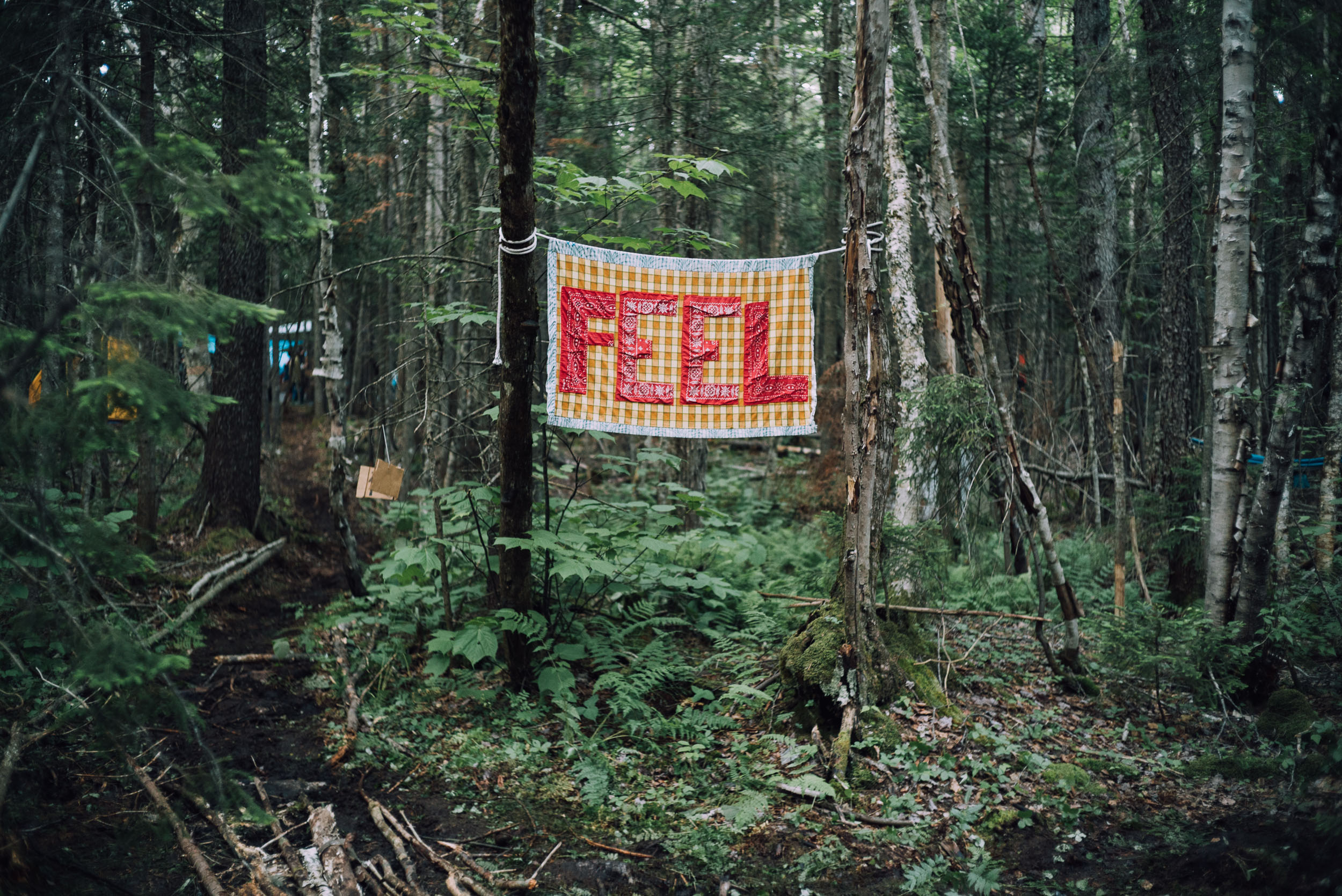 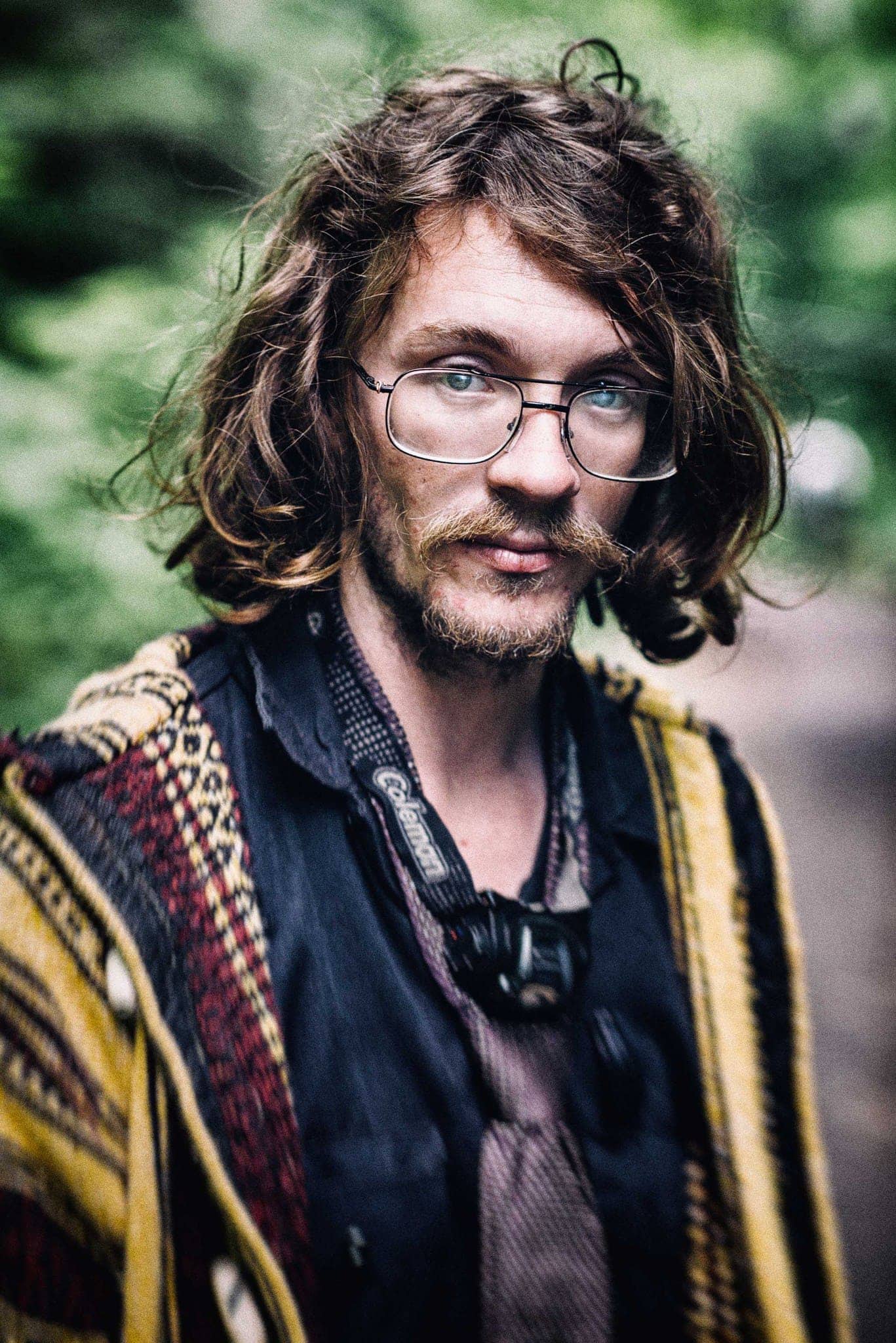 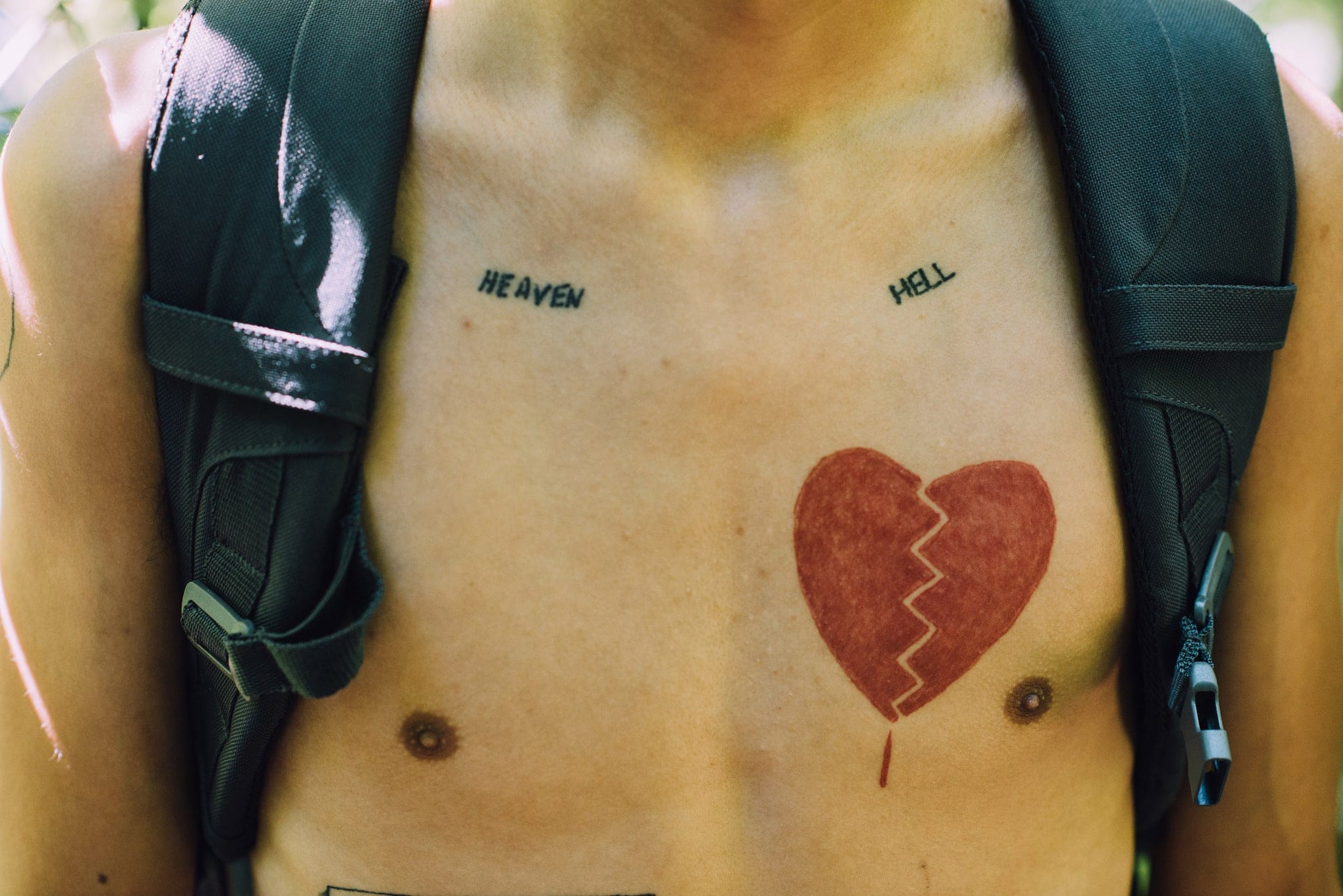 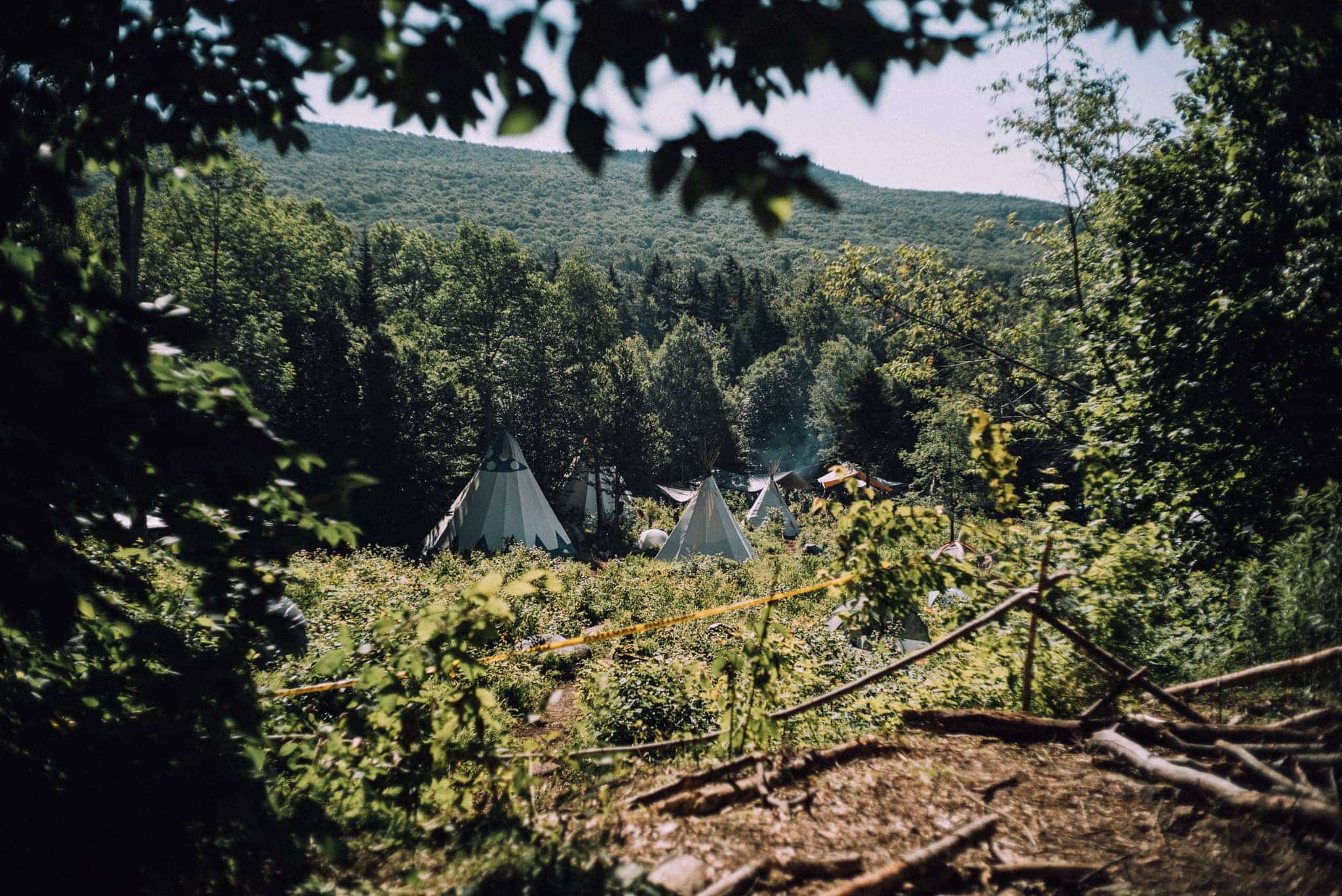 Born and raised in Signau, Switzerland, Reto Sterchi is a portrait and documentary photographer currently based in New York City.

Anders Carlson-Wee is a 2015 NEA Creative Writing Fellowand the author of Dynamite, winner of the 2015 Frost Place Chapbook Prize. His work has appeared in Ploughshares, New England Review, AGNI, Poetry Daily, The Iowa Review, The Southern Review, Best New Poets, The Best American Nonrequired Reading, and Narrative Magazine, which featured him on their “30 Below 30” list of young writers to watch.Winner of Ninth Letter’s Poetry Award and New Delta Review’s Editors’ Choice Prize, he was runner-up for the 2016 Discovery/Boston Review Poetry Prize. He lives in Minneapolis, where he’s currently a 2016 McKnight Foundation Creative Writing Fellow.