My Life On Rye: Beefeater 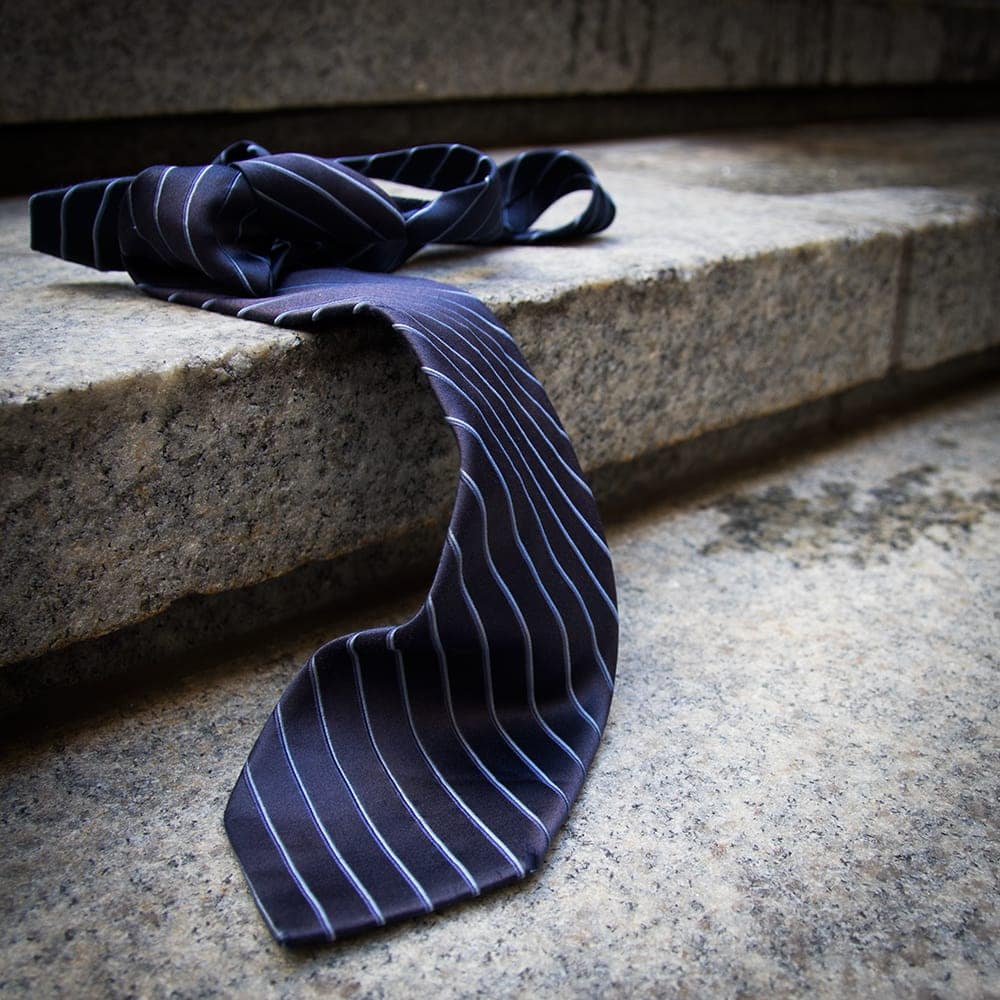 The news spreads like a punchline through the office.

Morris Stump, deputy head of Client Relations and all-around vanilla-flavored human being, was struck and killed by an amphibious tour vehicle while traveling on business in Dublin. “Right,” goes the joke, “If anyone was going look the wrong way stepping off a curb.”

The realization that he is, in fact, dead, cues a few self-aware moments of horror and apology. Then the market opens and ritual takes over.

It is an odd thing that a human life, expunged, does not warrant greater pause.

Morris’ work didn’t overlap with my own. If rumors are to be believed, he was a stickler for tiny details to the detriment of big picture items. He worked long hours and traveled often. He seldom talked about family. I think he had a son. He always wore a bowtie.

Six sentences to sum up a person. I’m no better than the rest.

The funeral is scheduled for a Saturday. I lie awake in bed that morning, waiting for the alarm. I’m dressed and ready before I need to leave. Grey suit. Cream shirt. Grey tie. When did I lose all color?

From my apartment, one must cross the island of Manhattan to board the PATH. Along the trek, I sheepishly glance at elegant women. Why are there always more of them when I feel alone?

The train rockets from the city. I am shaking in a cushioned chair. Two young men drink beer from paper bags. A mother plays a game with her daughter, pointing out the window. The conductor is a man with purpose.

From my seat, I glimpse the backyards of homes. Plastic playgrounds. Trampolines. Enough to make one covet the full story. How many children belong to that home, or that one? What fictions take shape as they play heroes and villains? How long until those stories stop?

Stepping off the train, it occurs to me that I have little reason to be here. If our work seldom intersected, our lives did so even less. Morris breathed the company through and through. He traveled with that headcase Conor Fidelity so that clients could see a reasonable face. A man who knew what he was doing and where he stood. Lately, I feel like a man dozing on a life raft.

My feet carry me forward, what other direction could I go? My phone informs me that the church is within walking distance of the station. It rains briefly. Spots appear on my shirt.

Conor Fidelity is holding court in the entryway, naturally. His lilting accent echoes from every direction. I pass with a nod, trying to recall what catholics call an entryway. I settle on vestibule but a penitent voice insists that they must have chosen something more romantic. Looking at the walls, I am sure every last detail was pored over. Stare for hours, one won’t find a single hidden joke left by some pagan mason. Every last inch measures to the whole, yawning and praying in servitude. It’s enough to make one dogear a hymnal.

The service resembles Sunday mass. We stand and kneel and sit. Pages are read. Hymns are sung. Morris’ wife speaks briefly — his widow now, I suppose. She’s all long lines and make-up. I look for tears but can’t find any. She descends. The priest offers words of condolence that could be about anyone. True catholics are summoned forward. They break from the rest of us to eat wafers. The service ends with me knowing less about Morris than when I arrived.

The wake is held at the Stump residence. I catch a ride from a colleague whose first name I can’t remember. He wears a bowtie a la Morris. I mention it’s a nice touch and he looks at me curiously.

It’s not until we arrive that I notice everyone from work is wearing a bowtie, save Conor Fidelity and myself. Some have fat faces and look like they’re choking. Others are thin and look like they’ve been lynched. I sip from a plastic cup, wishing I could subdue my morbid mind, then chalk it up to being at a funeral. I am unsure what’s brought such loneliness to my chest. Surely, if I sip enough, it will vanish.

Morris’ widow manifests in the thick of us capitalists and demands everyone remove their bowtie. A laugh goes up then dies at her expression. Grown men dress down like scolded children.

I slip outside through a sliding door that takes time and effort to unlock. Pool water catches the sun, feigning colors. The cement is lined with flowers that climb the side of the house. Magentas and purples and yellows. I marvel at them, wondering how they could have grown so early in the year, before bending down to smell and realizing that every last one of them is plastic.

A young boy trudges past me and boards a swing set at the other end of the lawn. He kicks harder and harder, rising. His shirt comes untucked.

Gravity should yield just this once, I think. Let him rise. Let him escape. He should meet the stars, unzip, and piss on those celestial angels in his father’s name. Imagine having Morris as a father. He couldn’t have been home much. Imagine having a vanilla-flavored hero.

I suppose others have had it worse.

Conor Fidelity bursts out of the sliding door, saying, “No, taking a few minutes to meself like,” before shutting it behind him. He notices me and seems to weigh his options. “Not wearing a bowtie, are yeh?”

I lift the limp grey fabric hanging from my neck, he struts toward me.

“Believe those gowls? Appreciate it one level, show the yoke respect like, but pull your heads out of your arse. Mind wan?” he asks, withdrawing a cigar.

Unsure what I’m answering, I shake my head. He cuts a sliver off the end, shoves the full butt in his mouth and lights.

“Grand,” he continues, breathing smoke. “Morris was a different man traveling. Office ‘ll make a tiger seem like a housecat. Know it was O’Connell Bridge got hit? Tourist central. Words written on the ground like. ‘Look Left.’ ‘Look Right.’ Still. Poor yoke.” He lights and puffs and the poison drifts my direction.

“Can I have a drag?” I ask. He eyes me then hands it over. The tip is soggy. I do my best to wipe it without offending.

I puff, it tastes like I’ve swallowed the floor of a fireplace. I drag again and hand it back coughing.

We stand, watching the boy swing.

Conor draws a flask from thin air, hands it to me. I sniff the mouth, my senses fail me. I drink blind, it ends up being gin. I hand it back. He drinks long and slow.

So begins a rhythm of cigar and flask passing back and forth, not entirely at odds with the swing.

“You work for Morris?” he asks, breaking the quiet.

“That he was.” A pair of middlemen from the office sneak out of the sliding door. “Another minute,” calls Conor, sending them back inside. “Can’t when I’m ossified. Tools think wearing a tie ‘ll make me think, ‘Grand. You’ll be a fit for Morris’ job.’ At a funeral. Shite.” He exhales looking at the sky. “Goes beyond cat and tiger. Morris was a good man. Intelligent. Funny. Savage friend. Be missed.”

“I didn’t know him well,” I say. “But he listened when you talked. Not everyone does.”

“Remind me your name?”

“County Cork. It’s a few generations back, though.”

“No, unfortunately. I want to.”

“Beautiful part of the country. Folks from Cork ‘ll tell you it’s the real capital.” He breathes smoke, narrows his eyes, and asks, “Know what your name means?”

I sip from his flask. Crisp cold stone fruit and flowers that’d shame those surrounding us. “Noble, isn’t it?”

He smiles. “What do you know about client relations?”

“Not rocket science. Wouldn’t ask Morris send me to the moon.”

“Wouldn’t it wreck them if I brought you in for a chat? Teach them acting the maggot. Sweat and mourn. Self-implode.”

“How long you been with the company?”

It wins a smile. “Might be the wrong department is all.” Conor extinguishes his cigar and slides it into his pocket. He shakes my hand again and with a “good on yeh” makes for the door. Before heading inside, he pivots to retrieve his flask, which I realize too late I’m still holding. “Know your name has another meaning?” he asks. “Champion.”

When he slides open the door, conversation spills out. “Stick with me,” he says in farewell. “You’ll never lack for useless information.”