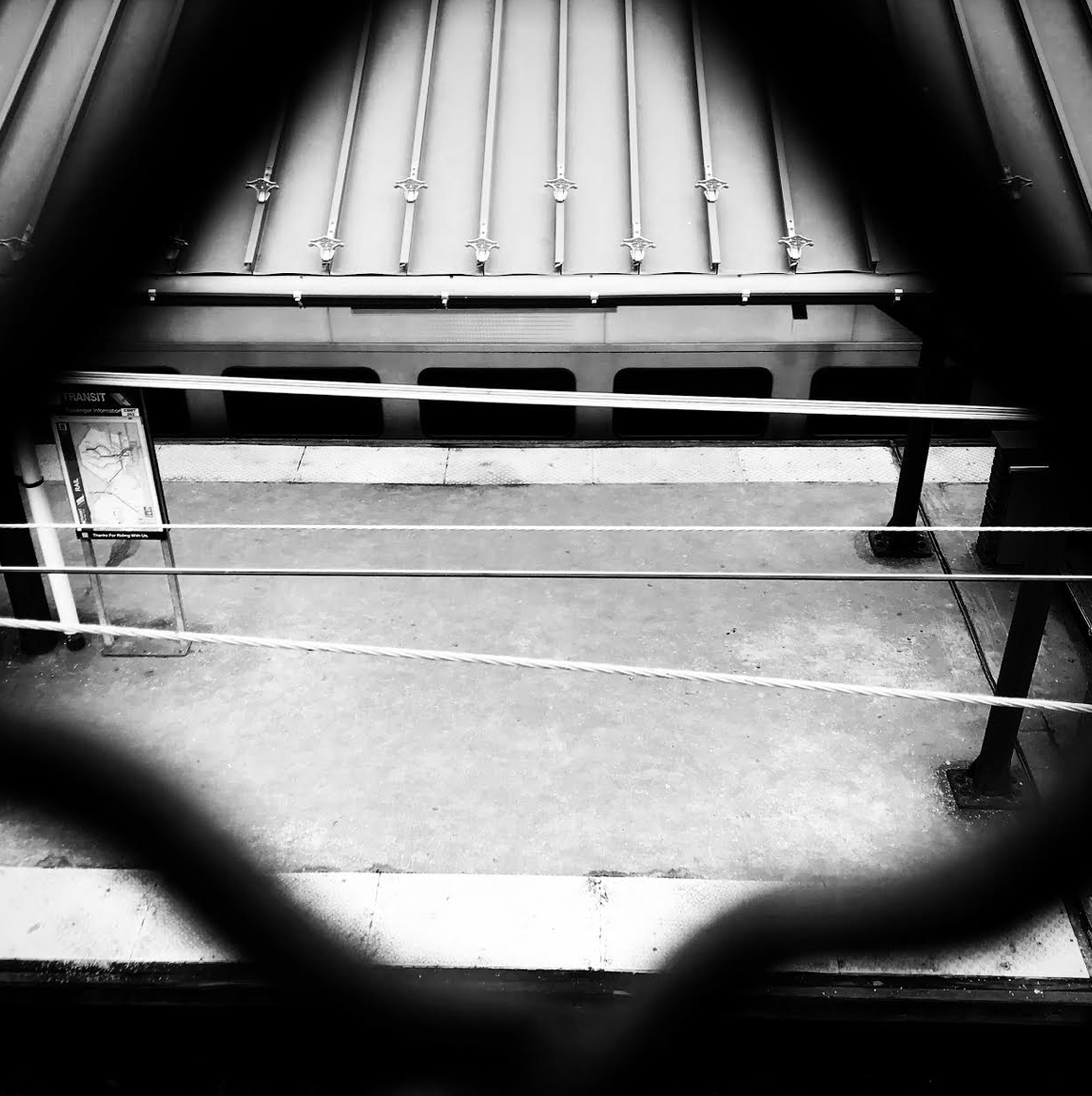 Two months past graduation. First visit back. It took half an hour before I admitted my father wasn’t coming to pick me up.

I walked up the hill from the train station and continued along the main route. Night had fallen in my hometown — a tiny South Jersey sprawl of chain restaurants, service shops, and a landfill.

Like the start of a song, in rolled summer rain. My favorite weather. Tasting the steam off the pavement. Feeling a part of everything.

Our street was a dead end circuit lined with prefab houses. The lights were on in our windows. I knocked loudly, suddenly tired.

My father looked like a yeti in the midst of a bender. He embraced me there at the door. “You came early.”

“Time is an illusion.” He separated himself. “You’re soaked.”

I stepped inside. “It’s raining.”

He leveled his shoulder to close the door.

“You were supposed to pick me up.”

“Got your clothes still, you want to change. Room’s just how you left it.”

I looked around the living room.

There were glasses and dishes on every surface, caked with old food. A half-empty handle of Jim Beam in front of the couch alongside a handful of exhausted beer bottles. Used socks scattered about the floor.

“What happened?” I asked.

“Ah,” he said, taking stock. “Place gets away from me when Trisha’s off visiting her mother.”

“Trisha? What happened to Anne?”

“Been that long since you visited?” He put me in a headlock as though I were twelve. “Shame on you, buddy,” he said. “Missed Bethany altogether.”

He let go just as I pulled back, sending me ribs-first into the back of his favorite chair — a moth-eaten pile of garbage that had originally been the color peach.

He stumbled to get it, not hearing. “This is Wiley.”

I escaped into my bedroom while he laughed and talked.

It was indeed how I’d left it. Moving a Saved by the Bell mug revealed dust on all sides. My mother’s quilt laid atop the bed. Posters of James Dean and Jimmy Page lined the walls. I opened my drawers and sure enough there were the magazines my father had passed along to me. “Textbooks,” he’d called them. “Vagina 101.” I reached past them to get a dry shirt and shorts — clothes I’d opted not to bring to college due to poor fit and/or lack of any and all style.

I exited my bedroom in time to catch him downing a glass of whiskey.

“Mhmm,” he said, noticing me. “Time we got you edjumacated.” He proceeded to unearth a “clean” glass to hold my own fair share of Jim Beam, crack an Arrogant Bastard Ale, and thrust both before me. He then turned to the bottom cabinet of records and threw an LP of Fela Kuti on the turntable.

That cabinet represented a mere fraction of his collection. Spanning every genre imaginable and sourced from every country under the sun, my father’s records filled three standing shelf units in the living room, the floor along two walls of his bedroom, one wall in mine, and the top and bottom of each of our closets. Still more sat atop the kitchen cupboards and fridge. Despite the deluge, he maintained an internal ordering system that allowed him to locate any recordin a matter of minutes. To the layperson, it might have all shown an uncomfortable level of hoarding. To me, however, it constituted my musical education.

“Tell me the nuts,” he said, easing into his chair. “Want to know everything’s been going on with you.”

I sniffed the whiskey. “I sort of met somebody.”

“Her name is Kitty,” I said, ignoring his question. “She’s going to be a vet. And…” I ventured a sip. Coughed. He raised his eyebrows, waiting. “We’re getting married.

“Married,” he said. “Huh.” He gulped at his beer, studied the depletion. “You know that’s a trap, right?”

He misjudged the tray table, his bottle spilled onto the floor. Cursing, he picked it up and slurped at the foam escaping its mouth. I searched for paper towels.

His loose sock and I had a stand-off. Finally, I admitted that my father and I were related, his dirty sock was basically my dirty sock, and I used it to wipe up the spill. He, meanwhile, seamlessly went from crisis-managing the overflow to shotgunning the rest. Finishing with a sigh, he zigzagged around me to the fridge to get another. I recognized the triumphant, wavering look in his eyes. The clock had now started.

“Never trust institutions,” he said, settling back onto his throne. “Life is not one size fits all.”

“How are you going to pay for it?”

No hand soap, naturally. Dish soap, it was. “That’s sort of why I’m here.”

“Ha. Right,” he said. “Got a few grand under this seat cushion.”

“Don’t talk down to me,” he said, tone abruptly sharpening.

“I wasn’t asking for you to pay for anything, okay?” I sat back across from him, sinking into the couch. “Her parents are going to help us.”

Cut to the chase. “I was wondering how I access the trust Mom left for me.”

“I mean, I graduated. I should be able to withdraw it, right?”

“That money went toward raising you,” he said.

I stared at the lines on his face, the stubble creeping around his mouth.

He squinted back at me. “Food. Clothes. Shit to keep you busy. School could be twelve months a year, ask me. Amount I dropped paying someone to watch you during the summer.”

Flashback to throwing a rubber baseball against the back of the house, hours ticking by. I swallow the urge to wring his neck. “I watched myself.”

“Not that first year, you didn’t.” He tilted his whiskey and like magic, it was gone. “And here I am,” he said. “With shoes older than most people’s pets.”

“That why you proposed to this girl?”

“What are we talking about here?” he said, setting his empty glass on the floor. “What’s everything boil down to in this world?”

“I’m not doing this with you.”

“Use your mind, for a change.” He picked up his glass, remembered it was empty, set it back down. “Come on. What’s everything boil down to?”

I pinched my leg so I wouldn’t yell. “You want me to say sex?”

He jabbed a finger at me. “Money.” He shook his head, victim of circumstance. “Every last thing. Either got it or you don’t. Sounds like you’re itching to switch teams.”

“She proposed to me, alright?”

Long stare, before his eyes drop to the arm of his chair. “Bought your guitar, didn’t I?” He fumbled for his beer. “Well?”

“So do you still got it or did you exchange it?”

“Damn right,” he said. “Because I didn’t skimp on it. Got you the exact one you wanted. That one, that same one that…” he trailed off, found a spot on the floor to occupy his full attention, came back. “Who was it, you were obsessed with?”

“That’s it. Same guitar Willie Nelson plays and I bought it for you. Cause you got talent.” He started to get up, decided against it. “Never understood why him of all people. We’re not from Texas.” He eyed my glass of whiskey, largely intact. “You going to drink that thing or marry it?”

I slid my glass across the tray table, half-hoping it’d tilt onto the floor. He caught it with the reflexes of an injured sloth and brought it to his mouth. “I’m going to bed,” I said.

“Too young, marry anyone,” mumbled my father. “Your mother and I never had a choice.”

I paused at the bedroom door.

“Still traveled, for a while. Played shows. Thought about recording. Could’ve done.” He burped. Dropped his head to his chest. “Love built on music. Even got a son out of it.”

The next morning, I found him passed out in his chair. I opened the blinds, a trade-off in the truest sense. Revealing the world outside meant exposing the mess within.

I washed the requisite items to brew coffee. Considered expanding my efforts to the house at large. Landed somewhere along the lines of “Fuck that, he’s the parent.”

Without any cue beyond being back home, I found myself whistling the melody to a Johnny Lee Hooker song as the coffee maker dripped closer to salvation. It was a tune I hadn’t heard since leaving for college, a B-side somewhere in my father’s collection. I searched the living room cabinets while he snored. The piles in the kitchen. My closet.

I hesitated, entering his room. It had never been off limits to me. If anything, his parenting suffered from too few boundaries. Nevertheless, it felt like an intrusion.

Drank my coffee. Waited. Checked my clothes in the dryer — still damp. Started a second cycle. Hunted for some sort of a breakfast. Shadows changed on the floor.

“Screw it,” I said, song still echoing through my skull.

His bedroom, odd enough, was relatively put together. The faint smell of kitty litter led me to a litter box, and I realized that I hadn’t seen my father’s cat since arriving. “Here, Bootstrap,” I called softly. “Here, boy.”

The record in question was not piled along the first wall I checked, nor the second. I opened my father’s closet and was greeted by a dozen or so plaid shirts on hangers,  Bootstrap the cat (whose scowl made it clear that he blamed me for his imprisonment), and my father’s old guitar. I slowly withdrew the guitar, strummed a chord, tried tuning. It must have been years since he’d changed the strings.

I spotted the Johnny Lee Hooker record midway through one of the smaller piles — only sixty or so, stacked horizontally. For all the love my father put into acquiring his collection, he was shit at care and maintenance.