They may play Country music, but these guys are rock stars at music festivals 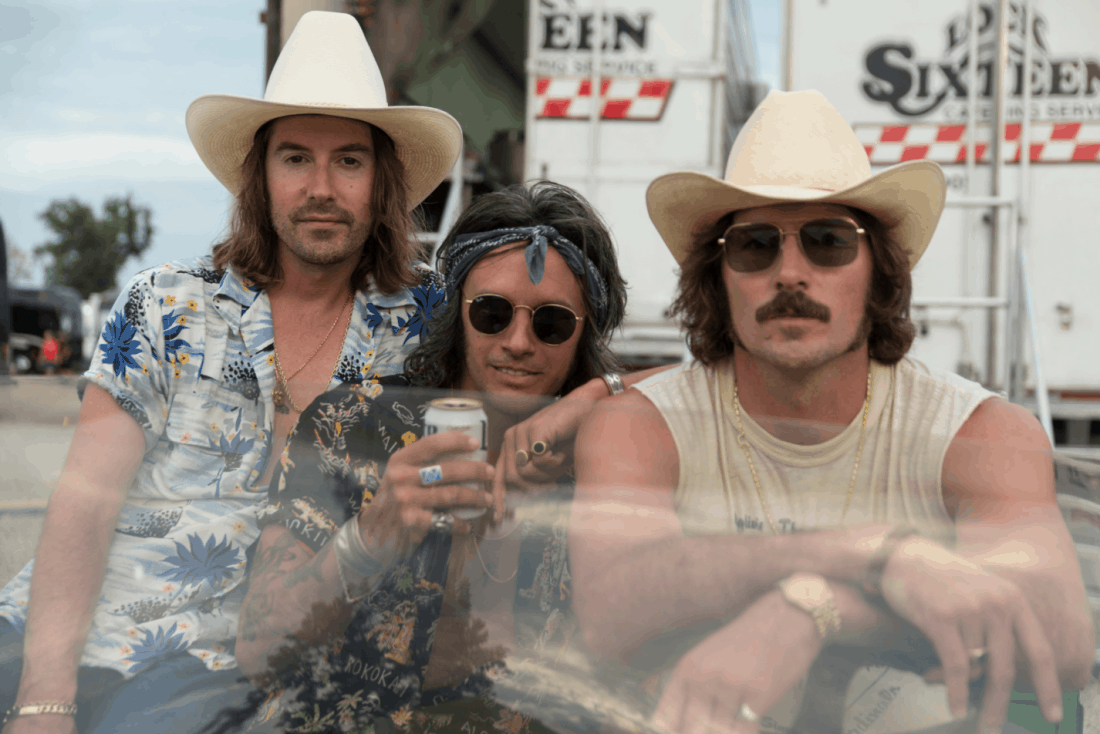 I landed in Cincinnati, Ohio after a layover in Houston. I’d been traveling all day. I bartended the night before and was operating on zero sleep. I still had a 2-hour drive to Ft. Loramie, Ohio, where the band Midland was playing the country festival aptly named Country Concert. I was staying at the only hotel in town that was attached to an ice-cream shop named Dairy King. The only room left was their “penthouse”. Let me tell you something, you haven’t lived until you’ve stayed in the Dairy King penthouse.  I got an ice cream and fell asleep by 6:30pm.

The band had driven all night from a late show in Milwaukee, Wisconsin for Summerfest. I got to the band’s tour bus about noon on Thursday, July 5th. I was greeted by Midland’s bassist, Cameron Dudley, wearing only underwear and slippers and drinking a coffee. “This sets the tone,” I thought as I rattled off a few shots. Soon after, Mark Wystrach and his twin brother Mike come out for their morning run. I’m not entirely sure what era Mark is from. Rocking sideburns, short shorts and a stache, Mark is like George Strait channeling Freddie Mercury. Mike is clean cut and straight laced. Jess Carson, who plays lead guitar, comes out and we all do the “pleased to meet you” exchange. Trying to keep that thin veil of professionalism between photographer and subjects. Spoiler alert: that didn’t last. 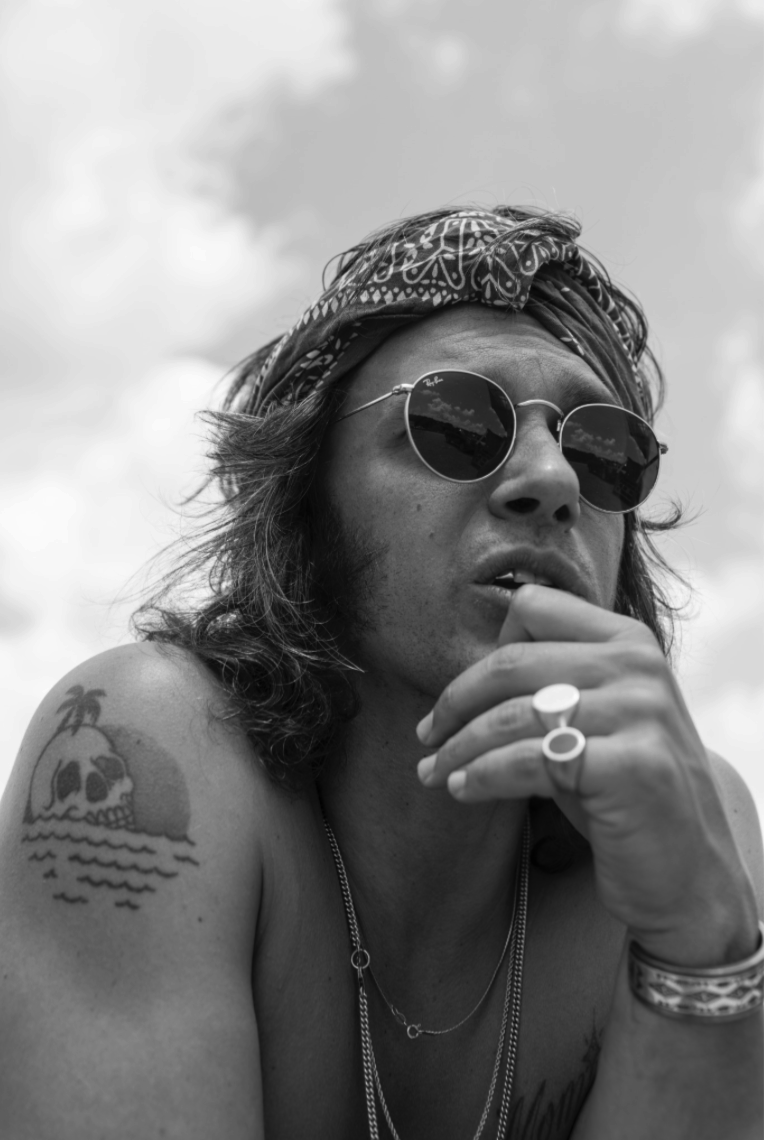 Jess and I get to talking. He tells me he’s into photography as well. He shoots on a Leica. Cool little camera. He shows me some of his pictures. “These are really good,” I tell him. He brushes it off saying, “I don’t really know what I’m doing”. But that’s the beauty of perspective, when you don’t fake it it’s unique and authentic. Jess and I head into town from the concert grounds. As I’m driving, he spots something that peaks his interest. An old church. On the side of the church is a building with the words “church side” plastered on. He and I snap some photos before we hop back in the car. Then we spot an old rusted out Chevy C10. Jess wants to get out and take photos of the truck. One more stop. An old barn with a dilapidated Jaguar out front. The V12 badges are barely hanging on. Jess sits on the hood. It falls off its hinges. We’re being eaten by mosquitoes. I snap a pic and its back to the car. The guys have a meet-and-greet to get to and the clock is ticking.

Cameron graduated from underwear to tiny short shorts by the time I get back. Hair still wet from the shower and wearing crocs instead of slippers. “You want to take a portrait?” I ask him. “Do you mind if I dry my hair first?” He says. We head outside after a few minutes and sit on a picnic table. “My balls aren’t popping out, are they?” Cameron asks. “This isn’t that kind of shoot,” I reply. We talk about where we grew up, Cameron’s tattoos, and our passions. He directed music videos for AWOLNATION and Bruno Mars. He notices “Jackson Hole” printed on my hat. “I want to play at the million-dollar cowboy soon. You should come,” he says. Then it’s time for the meet-and-greet. 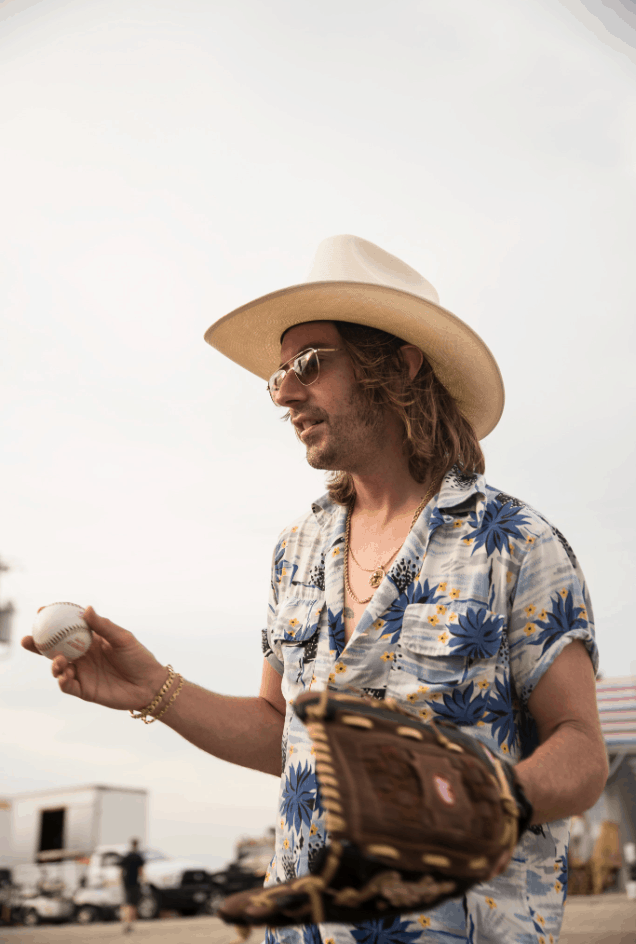 Fame on any level perplexes me. I’ve witnessed people do really goofy shit in these meet-and-greets before. It makes me anxious. The unpredictability of fans puts me on edge. Midland could not be any more casual about it. Jess doesn’t bother changing. Mark is drinking a beer. Cam doesn’t even put clothes on. We head to a tent backstage with a backdrop and a photographer. A cop is standing off to the side and Mark cracks a joke to the effect that Cam has drugs and he should perform a cavity search. The officer laughs it off. Their casual vibe is some next level shit. The band finishes the meet-and-greet. My internal clock is nagging me. “You guys are on in 30 minutes, right?”

We head back to the bus. Cam warms up his vocals and changes into a Hawaiian shirt unbuttoned and showing his tattoos and gold necklaces. His flared pants and snakeskin boots complete the look. Mark cracks another beer. He changes from his tank top into a worn-out shirt with the word “Polska” on the front. “You Polish?” I ask him. He tells me his dad bought this shirt for him when he was 11, extra-large so he could grow into it. Something about having sentimental value for a T-shirt really struck a chord with me. Jess throws on a cowboy hat and Hawaiian shirt that complements Cam’s. Five minutes or so before the band is on the guys stroll backstage. Huddle up. Fist bump. And then it’s on. They perform their hit “Make a Little” as well as “Burn Out” and “Drinking Problem”. They also pepper in some tracks from other artists — “Dixieland Delight” by Alabama and “Turn the Page” by Bob Seger, apropos considering they’re in the middle of a grueling tour schedule. 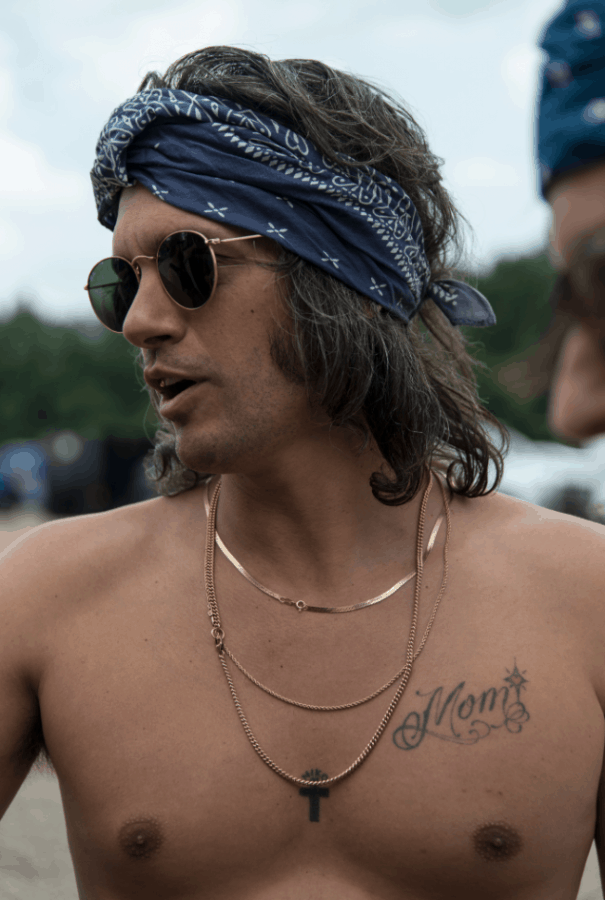 After the show everyone is starving. There are two restaurants in town. We choose Bruckens, home of Ft. Loramie’s famous “broasted chicken wings”. Phenomenal, according to the guys. My grilled cheese, however, was lacking. Two vodka Red Bull’s later I didn’t really care. The restaurant owner plays “Drinking Problem” on the juke box. It’s the Spanish version. The band gets a kick out of it. Several people come and talk to them throughout dinner. We get wings to-go and head back to the venue and buy beer.

It might as well be a backyard BBQ. Jess, Mark and Cam are throwing a baseball around. Beer breaks in between. We walk down to a creek to snap a few pictures. Mark jokes that all three of them should go streaking across the field and I should shoot it. Part of him is probably serious. Walking back to the bus Mark decides to take one of the concert staffer’s John Deere golf carts for a joy ride. He convinces the other two to hop on and speeds off with a mischievous grin. Harmless fun.

When we get back to camp we share beers as members of other Country bands pass through to shoot the shit. I text my mom that this is all I ever want to do.