Being Our Real Selves Online Starts By Augmenting Reality 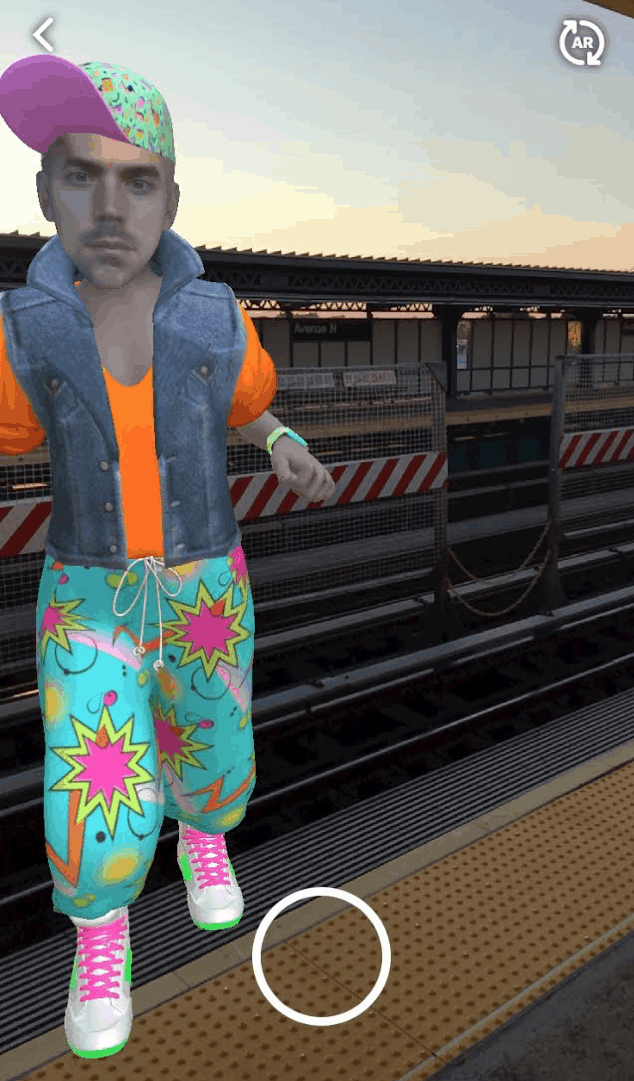 W e can only produce bodies so much. They’re expensive and they take a lot of time to produce.

Misha Leybovich is talking to me again, almost two years later, and this time he’s visible from across the screen, he in Atlanta, me in Brooklyn, chatting about Meograph’s newest demo app, Morf, which moves from simply swapping your face on a celebrity’s body to provide us, instead, the opportunity of turning into our own AR avatar.

It’s Meograph’s fifth product in six years, and as far as numbers go, it’s par for the course. “A start-up is all about pivots,” Misha says, his hands waving in all directions, as if to re-enact each jerk. “It’s a cliché because it’s true. To nail something right off the bat is rare. Anything that is ever successful has gone through a bunch of iterations.”

For Misha, primarily that meant setting out to do a better version of Flippy, which grew an audience that it didn’t retain. “One of the reasons,” Misha explains, “is that the visuals of the head weren’t very good. It was a one-size-fits-all hole for the head. We weren’t even thinking 3-D at first. We had no idea how hard it was … how hard it is,” Misha says, “to turn a face into a 3-D representation.”

Misha and the team at Meograph start by taking video to the face, converting it from 2-D to 3-D in real time by attaching a head to it that can morph. The blending process that changes a head to a face is difficult though, and everything needs to blend. Blending a face, I underline in my notes, is key.

“The problem always is hair,” Misha interrupts, running one hand through his. “It’s hard to separate hair from the background.”

I flash back to my Drake masquerade, thanks to Flippy, injected into the music video for “Hotline Bling.” Was my hair off? Is my hair off? I think, pushing my palm forward, from my forehead to the back of my neck. “Putting your face in clips is cool but there are still limits to creativity,” Misha says from across the screen. “You can’t say anything.”

The other issue—besides the bodies; the body issue—is that full 3-D scenes take too long to create. They’re too expensive. One day, or on one of the days between our last conversation, in September 2016, and now, Misha thought: Why not make use of your own environment? Why not turn yourself into an avatar and fly around your apartment or the street?

“We wanted for people to do all sorts of things,” Misha says. “Put the character in the real world rather than one pre-determined scene.”

And with the real world comes real opportunities to turn your world around. Misha’s larger goal, too, isn’t on the consumer level; he wants Meograph to take this technology and license it to other companies.

“My worry is that we will be perceived as the company that will turn you into a banana,” Misha says, laughing, “rather than at the forefront of 3-D avatars which we’ll all need in the future.”

But first, Meograph has to createthe products to help prove that there is a need for AR technology in everyday life. Here’s where the body enters the picture. Literally. It’s where we return; it’s where Misha and his team continually return. The old body problem—not even AR technology can get rid of the body, or transcend it.

“The challenge right now,” Misha says, “is you can’t control the avatar with your own body.”

“It’s not intuitive?” I ask, from my seat on the couch. Misha nods in his pantry, or office. Documents, pamphlets, books; stacks of paper in the foreground and in the back. Misha’s face stills to a stop but his voice keeps coming. It’s always the glitch I wait for; it’s always the glitch I aim to re-create, as if on command. The accidental revelation, or the machine breaking through to show us its insides.

“We are hoping to animate,” Misha’s face suddenly jolts back to life, catches up to the words that were articulating without him, “the body based on your facial expressions or even force a moment when you can animate the avatar yourself without thinking about it.”

Misha nods, and this time I can see and hear him altogether, all the same or at the same time.

“We want to partner with people who need this tech. We are putting out as many use-cases as we can so that developers can come and approach us. We’re basically saying, ‘If you need this we’re here for you.’” 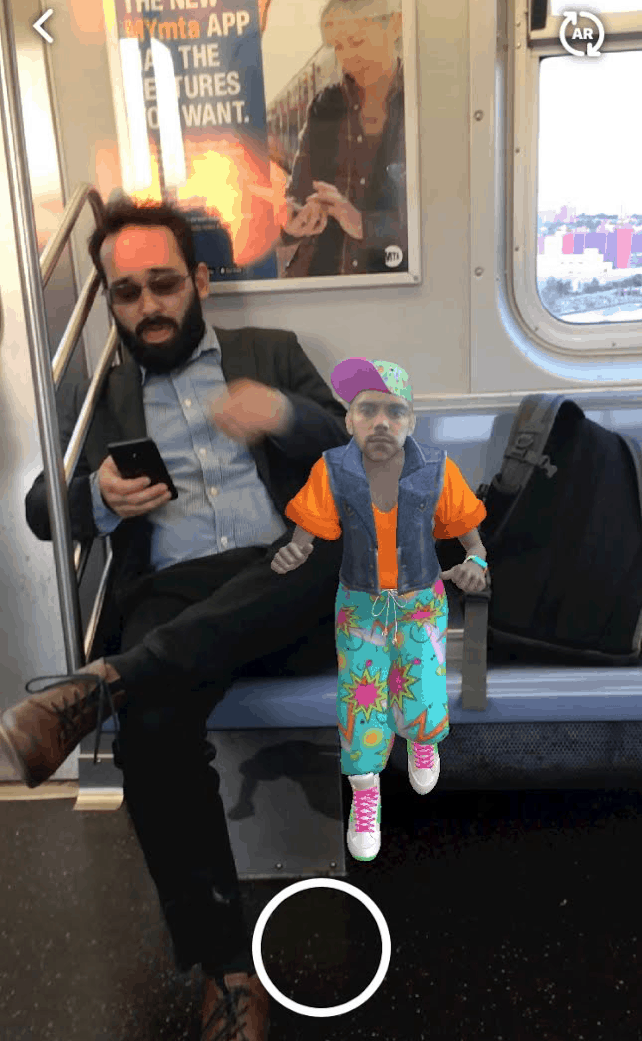 B efore Meograph created Morf, there were two ways to build an avatar. Cartoons—like Bitmojis and Animojis—and puppets, which use a single static capture of a face and then render it into a 3-D model. The problem with either option is that not all us want to express ourselves as a cartoon or an animal all the time—at a board room meeting or an interview, like this one, for instance—and puppets can’t replicate the dynamics of our faces; the expressions based on minute facial reactions that communicate so much—all the things we do without thinking about it—become lost. But it’s only just recently become technologically-possible to use video, not a static photo, to render a face, to blend it into a real head, to blend that into an environment no matter the lighting of an environment, no matter your skin tone.

“The human eye perceives and appreciates the difference between a square versus something that is cut out and has contours and has lines and has boundaries and is fluid,” Misha says. “It feels better. It feels like it belongs there, like it’s part of a native experience.”

Misha’s choice of words—of a native experience—is not coincidental; so many of us, after all, want to feel as if the Internet is something we belong to by birth; a channel we control instead of a channel that controls how we move, pass, and pick up people and places and things. Avatars are a big business; self-curation will only increase their market value. And as Misha relates, Fortnite, the free-to-download massive multiplayer shooter and the world’s most popular video game today, is already making over three hundred million dollars a month on customizations of characters that aren’t even you. A lot of very real money passes hands in the cosmetics-quest to adorn characters with looks that represent their users. “As avatars become really you and used in more places, the already multi-billion dollar avatar industry will skyrocket,” Misha predicts, “and we are hoping to facilitate.”

I pause for a minute, maybe less than a minute, maybe thirty seconds, picturing all the people moving through apps, games, fashion or beauty experiences, movie or production promotions, the F train …

And Meograph is hoping not only to be at the forefront of this technology, but in doing so, actively work in re-orienting our social and cultural norms, responding to catfishing and a culture of fake information and fake users by building data-structures into its technology that have a “real score” and a “lie score,” championing transparency and allowing users to answer their own question, an inquiry that will likely become increasingly common: To what degree was this person morphed?

“While we can’t force this to happen industry-wide, we are in the position to become an early leader and achieve some success,” Misha says. “Then maybe we can give consumers the need to ask more of their products and of the companies that make them.”

T he language of the face is about being able to express ourselves, but it’s also about being able to understand another person. The Internet has decoupled us from our identities; the flip-side is that it’s given people free reign to be their worst selves. Trolls, Misha points out, don’t exist in real life. If it were our faces on Twitter—our real faces—that problem recedes; maybe shaming goes away too. The more that we engage with each other, the more we have an opportunity to use some approximation of our faces, the more we will become our real selves online. Being able to see how other people are reacting in “real time” when interaction occurs in a comment, direct message, or a Tweet will foster a need and a desire not only for radical transparency but also radical empathy.

Almost two years have passed, but it’s still about co-creation. Empathy and humanism. Meograph creates the real you, so that the real you can leak out online, form a real connection, with so many other digital avatars across the screen.