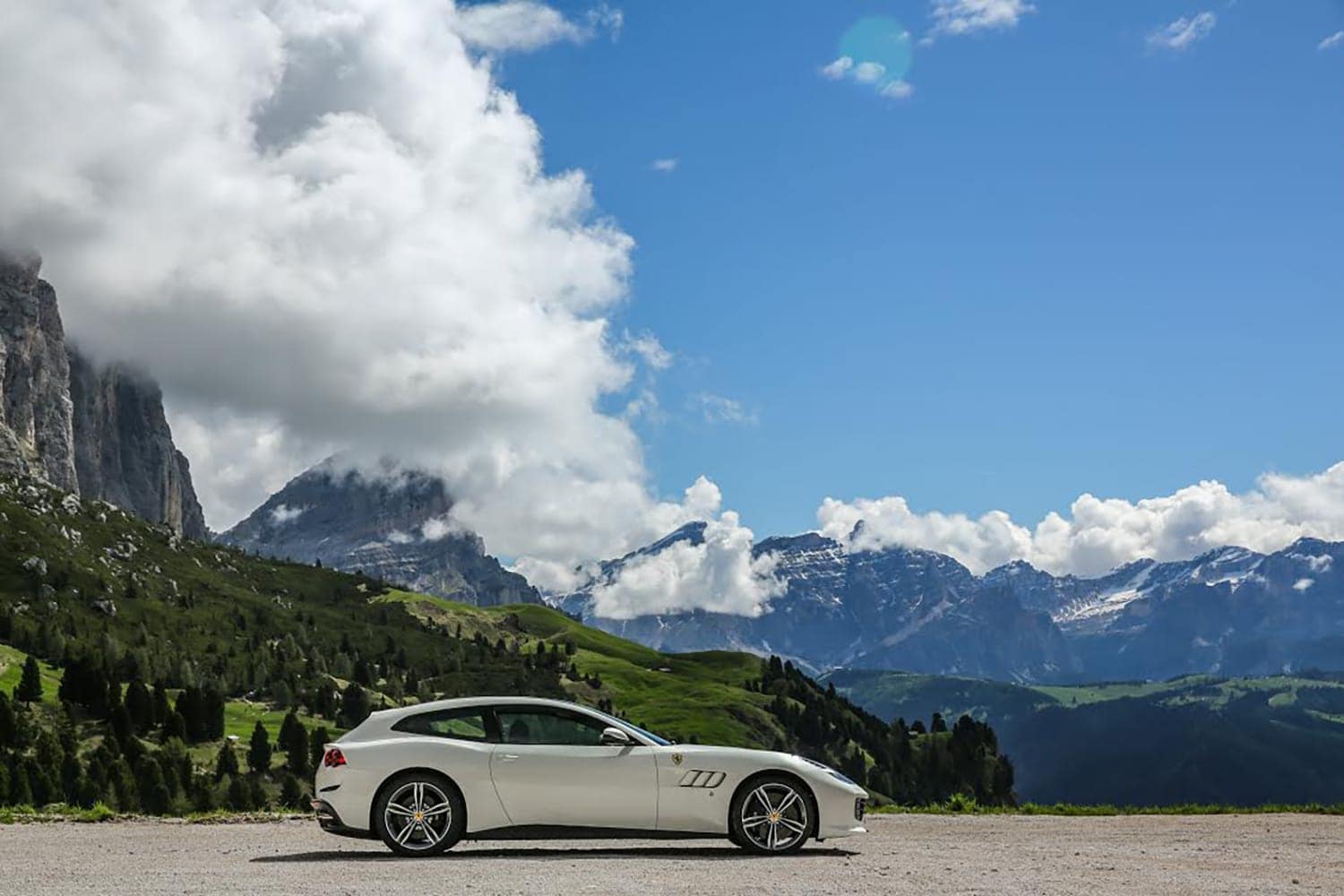 I learned to drive the 2017 Ferrari GTC4Lusso by driving my 2011 Kia Forte on the NJ Turnpike, and imagining I was behind the wheel of Ferrari’s front-mid mounted 6.3-litre V12 engine shooting-brake 7-speed dual-clutch hatchback.

I don’t know what any of these numbers mean; I’m just reading from the e-mail Ferrari’s travel agent had sent an hour ago. When I was still moving with my own legs. As a rule, all writers do this, all the time, so it didn’t feel so strange, to drive through Staten Island, toward the Goethals Bridge, the NJ Turnpike, the rust and metal and the hot-trash stink of Elizabeth, and to picture I was rounding the foothills of the Apuan Alps instead, wind curving up my shirt and through my hair, squinting so you can see I really feel it.

The hatchback on my Kia Forte is probably the only similarity, besides the exterior’s cerulean hue. Ferrari’s three-door grand touring goes 0 to 62 in 3.4 seconds. The cost to own one, according to the spec sheet attached to the e-mail, is $300 thousand. The cost to drive one, for an afternoon, over the foothills of the Apuan Alps, and very likely, along the stretch of Marina di Pietrasanta’s gold-sand coast, is free, at least if you’ve been entrusted with the responsibility to write about it for the GTC4Lusso media launch.

But we’re not there yet. I’m still on the NJ Turnpike, somewhere across Elizabeth, revving my 2.0 4-cylinder engine under one, two, three white-silver specks which are embarking on their own journey, Newark Liberty International receding in the rearview. I’ll be on that jet tomorrow.

You’d need to look up to understand how blurred your line of sight is, in the passenger seat or otherwise, when you’re going 208 miles per hour

“So how fast does this machine go?” I ask, turning to the man in the passenger side who’d just switched seats, glancing up from the spec sheet which says 208 miles per hour. Spec sheets, like cell phones, are useless. They only give answers. What I want is to only ever ask questions; to know what you could never know; really, I’m not interested in how fast we’re going, or how fast we’re going to go. I want to know how it feels. I want to tell you how it feels.

You can’t ever get that from a spec sheet or a Google search. You’d need to look up to understand how blurred your line of sight is, in the passenger seat or otherwise, when you’re going 208 miles per hour. 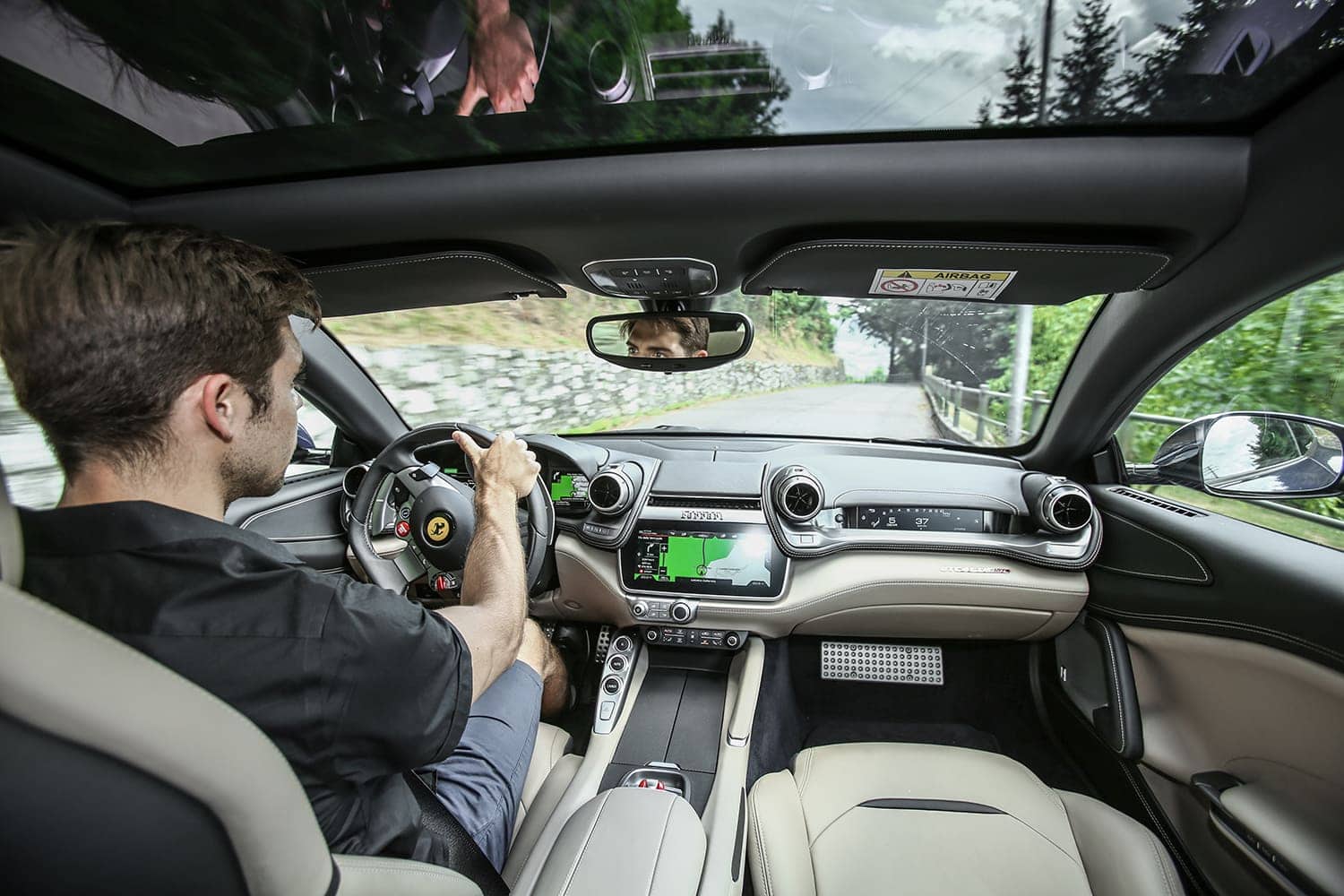 The winding roads of the Apuan Alps are nearly one-lane in the Ferrari; Fiats and Lancias pull over at the sound of the approaching growl, except for the rare moments you turn a curving bend and slide by a commercial van or utility truck ambling in the opposite direction. The Aerautodromo di Modena this is not, but the GTC4Lusso is better for it, nimbly handling every literal bump of the road with the type of ease and immediacy I’d only ever witnessed in the movies. The thing about wish fulfillment is, Ferrari makes these aspirations of grandeur possible for the everyday driver, and this, more than anything else, is what sets the GTC4Lusso apart from its predecessors, and its competition, or at least the cars that trail behind, or pull over at the sound of that growl, the sort of operatic treble that distinguishes a Ferrari from any other car, my driving companion tells me, as much a part of the brand as the spirit of artistic innovation and adventure. And today we are having both.

It’s no surprise that Ferrari, which picks a different location for each of its media drives, chose Pietrasanta in Versilia to unveil the GTC4Lusso. Tuscany’s city of art has twenty-eight laboratories of marble and nine foundries of bronze, and its streets flourish with actual art objects, including a massive window without a frame that opens up to a long stretch of stone sidewalk into Piazza del Duomo, where we meet in the morning to pick up our keys and find our Ferraris, a dozen parked alongside a majestic monument of Leopoldo the II and the white-marbled gothic spires of La Collegiata, as the village’s red-bricked bell tower chimes, reminding us that time is money but adventure is always priceless.

The night before, after a media presentation and dinner in the Museum of Sculpture and Architecture, a maestro regaled us under the half moon with a Stradivarius from 1728, a machine that creates a distinct acoustic because of its soundboard, itself a type of engine; the varnish, the wood, even the width producing a tonal accent that is inimitable. In that way, it sounded a lot like Ferrari, a company driven by luxury and sport but also by the desire to create something beautiful.

Decades ago, Ferrari re-defined adventure. Now the automobile company is re-defining how we have adventures

In Tuscany, at least on this balmy afternoon, all roads seem to lead to Lucca. Despite Ferrari’s pre-programmed GPS-guided route; 146 kilometers through six strategically-placed waypoints toward our eventual return to the Piazza del Duomo, we are circling Lucca, twisting around those mountain turns and idyllic villages as young boys and old men raise their arms up and cheer us on, hoping we’ll give them another growl in our wake. We’d lost the pack of other journalists sometime after Waypoint 1 and Waypoint 2, spotting the Mayor of Pietrasanta in a café’s parking lot, and pulling in to join him for a macchiato, what he referred to as “the unofficial checkpoint”—the first, it turns out, of many.

Decades ago, Ferrari re-defined adventure. Now the automobile company is re-defining how we have adventures. And it has attracted a new generation of drivers. Today, Ferrari drivers are ten years younger, and they are taking sixty percent of their trips with at least four passengers. So Ferrari responded with improved efficiency for CO2 and fuel consumption, and almost-instant responsiveness even at low revs, thanks to the GTC4Lusso’s new thrust vectoring control and its SSC4 Side Slip Control System, the closest thing to a car having its own sentience, with a brain that receives information from onboard sensors and grip estimation, intervening when necessary and adapting the car’s behavior to suit road surfaces and grip conditions of all types.

“This is the Ferrari you can use daily because customers want an everyday Ferrari,” the GT product manager explained to a room full of writers, the night before at the MuSA. In doing so, Ferrari has designed the GTC4Lusso with more storage space, more luggage space, more rear leg space; more space to create more adventures. Smiling toddlers in infant seats, skis and snow boots secured in the trunk, brown bags filled with apples, and carrots, and organic cream in the back seat.

A photo montage from the presentation flashes in my mind as we speed under another sign indicating LUCCA; the Fortezza delle Verrucole and five other points of interest shown in the 10.25-inch high-def touchscreen, all of these places we are supposed to be. Now we’re waiting for a call from Ferrari, from other journalists, from the Mayor, maybe, to tell us where to go, or how to get there.

“It could be worse,” my co-pilot admitted, navigating our ride in Ferrari’s new dual-cockpit passenger display; click anywhere on the map and it automatically becomes selected as a new point of interest on our ongoing route.

I ask him how much worse and he tells me about the time, in Spain, when a wave of writers were detained by Spanish police for speeding past their unmarked cars over the Pyrenees.

And in fact, in the GTC4Lusso, it only gets better, circling Lucca instead of following the rest of the pack toward Barga and the Verrucole Fortress, replacing a guided tour with our self-made journey, the way I think Ferrari always intended.

“Turn left,” the guidance instructs, in its best lady-like British voice. “Then go straight ahead.”

“You know what they call that in Virginia?” my co-pilot asks, turning to me, not really expecting an answer. “They say, ‘Drive straight on, and then keep on getting it.”

We keep getting it. Then we get some more. “I say, ‘Taste everything,’” I return, glancing back at him, the road a stretch of black-grey blur. “‘Then go back for seconds.’”

Eventually, we make it to lunch, as everyone else is preparing to depart. Rolling green hills, brick-walled ruins, more mountains studded with more enchanting villages. A view of the castle that everyone else has already visited, taking the same photos everyone else has. Espresso arrives at the table. Mounds of golden pillows called pasta fritta in a bowl to my left. Cured meats and cheeses from the region to my right. A hulking slice of beef still forthcoming. Unofficial Checkpoint 2, I think, as I take my first sip, glancing at the Mayor who’s now sitting at another table, speaking in Italian, probably relating the incident about the two American journalists who got lost moments in and joined him for a macchiato. 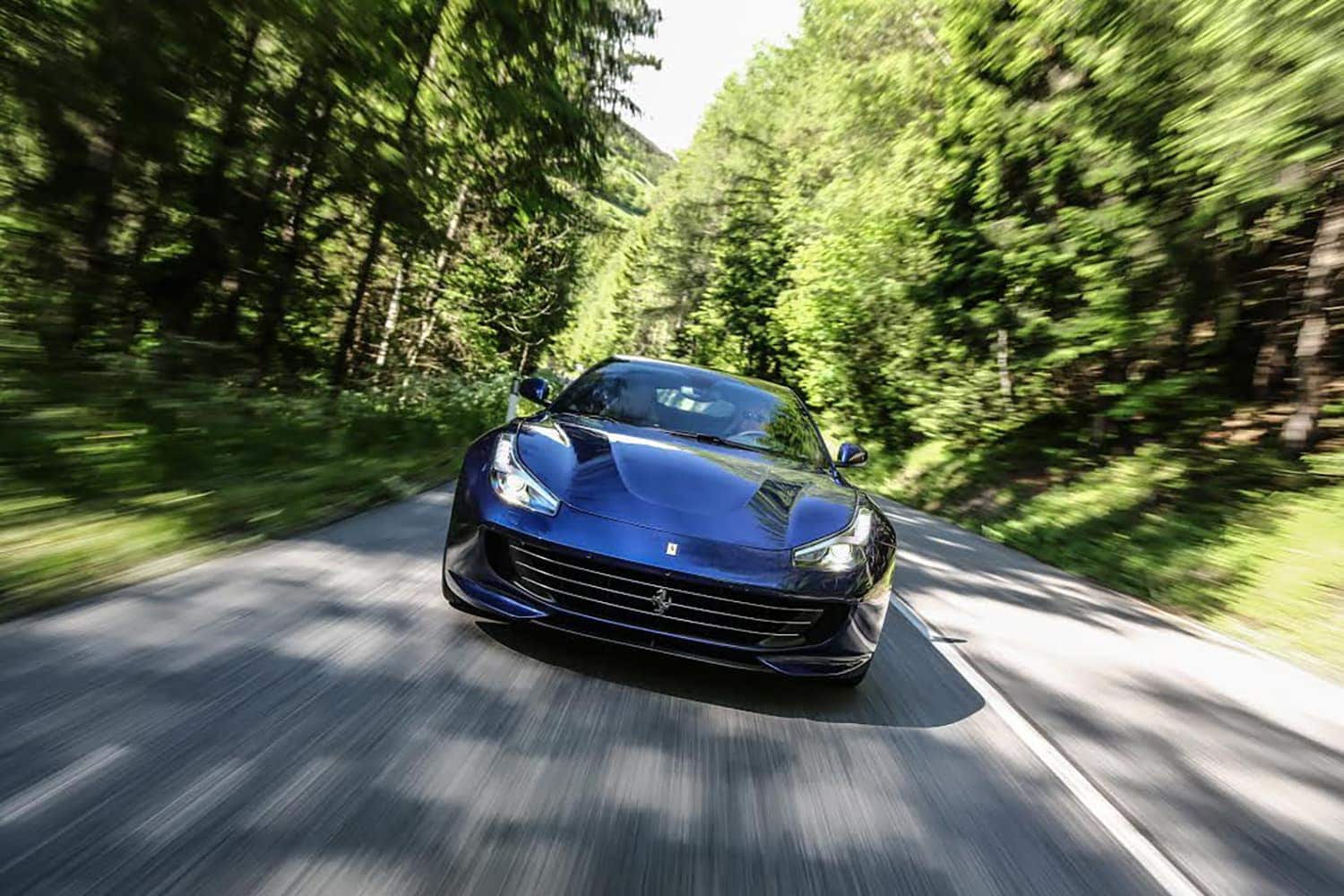 We pull in to the Piazza del Duomo next to only two other Ferrari. Unsurprisingly, we’ve arrived ahead of schedule. The idea of schedules was thrown out the window, or the panoramic low-e glass roof, several hours earlier.

“Don’t worry,” a Ferrari rep tells us, sitting on the stone steps that lead to the cathedral, hands on her knees, keeping time without a watch. “There’s two more right behind you.”

I stand silent for a moment, scanning for the potent purr that heralds a Ferrari, the V12 engine that customers say is their favorite part of the experience. I bend down, reach for a step, take a seat beside her as I think of titles to this story. All Roads Lead To Lucca, Unofficial Checkpoint, Points Of Interest, Lost In Ferrari.

Ferrari creates adventures. The point is to lose yourself.