The pursuit of perfection leads to the sea, and possibly into space 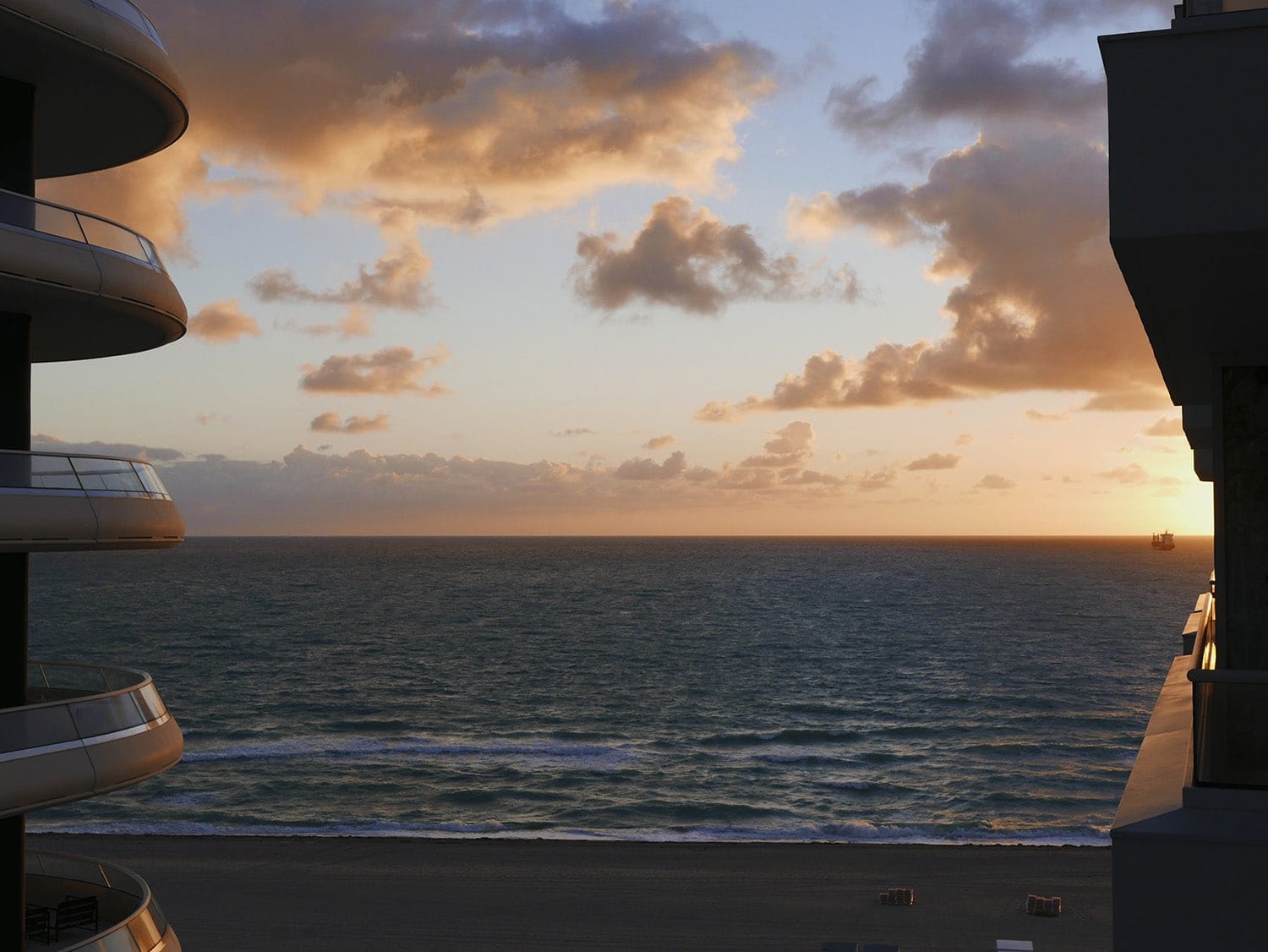 View from the Faena Hotel, photographed  with the Leica D-Lux digital camera.

“I’m Erik Rasmussen and I’m from America,” I tell the woman with the clipboard. “Okay, alright, there you are,” she says, checking my name off the list. I’m the first one on the bus and take a seat about the middle. There are maybe eighty editors and journalists gathered on Miami’s Faena hotel’s steps and parapets. The sun hasn’t quite breached the horizon and there’s a palpable excitement quivering through the international press corps, usually induced by coffee. None of us has a solid idea about where we’re going, what’s happening next. This anticipation has been methodically stoked by the Lexus PR team through the preceding weeks, for us, what was surely a much longer commitment for them, Lexus.

The lede here is that Lexus has built an experiential lifestyle media event called “Through the Lens” and based around product reveals that are not traditionally automotive but, one figures by the event’s name, are photogenic. The experience began the previous night by gifting all media our own personal Leica D-Lux digital camera, which now hang by red lanyards from journalist necks and are fiddled with as we’re bussed to our first location, the Lexus Mansion on Biscayne Bay’s Venetian Islands where breakfast is served and, alas, coffee.

It has to be mentioned that none of us are automotive journalists, and probably half of us are uncomfortable calling ourselves “journalists” at all, strictly. Lexus knows this and provides us with press releases as a reference to clear up automotive technicalities, should they become germane to our story. “Story-teller” is a more accurate, or at least more comfortable, way to describe many of the assembled editors and press reps here, and that’s what Lexus has selected us to do: tell their story from a lifestyle perspective. “Through the lens” event’s point is getting us, the journalists/storytellers, to know the Lexus brand by getting a good look at it through a series of carefully organized events, emphasizing how we look at the brand by making us its image makers. The whole thing has a gimmick’s taint, which the Lexus engineers, designers, and corporate heads of departments have zero visible problems with, probably because their part in this — conceiving and building some of the most sophisticated machinery in human history — has zero gimmick about it, a point that is about to be dramatically made at the mansion. 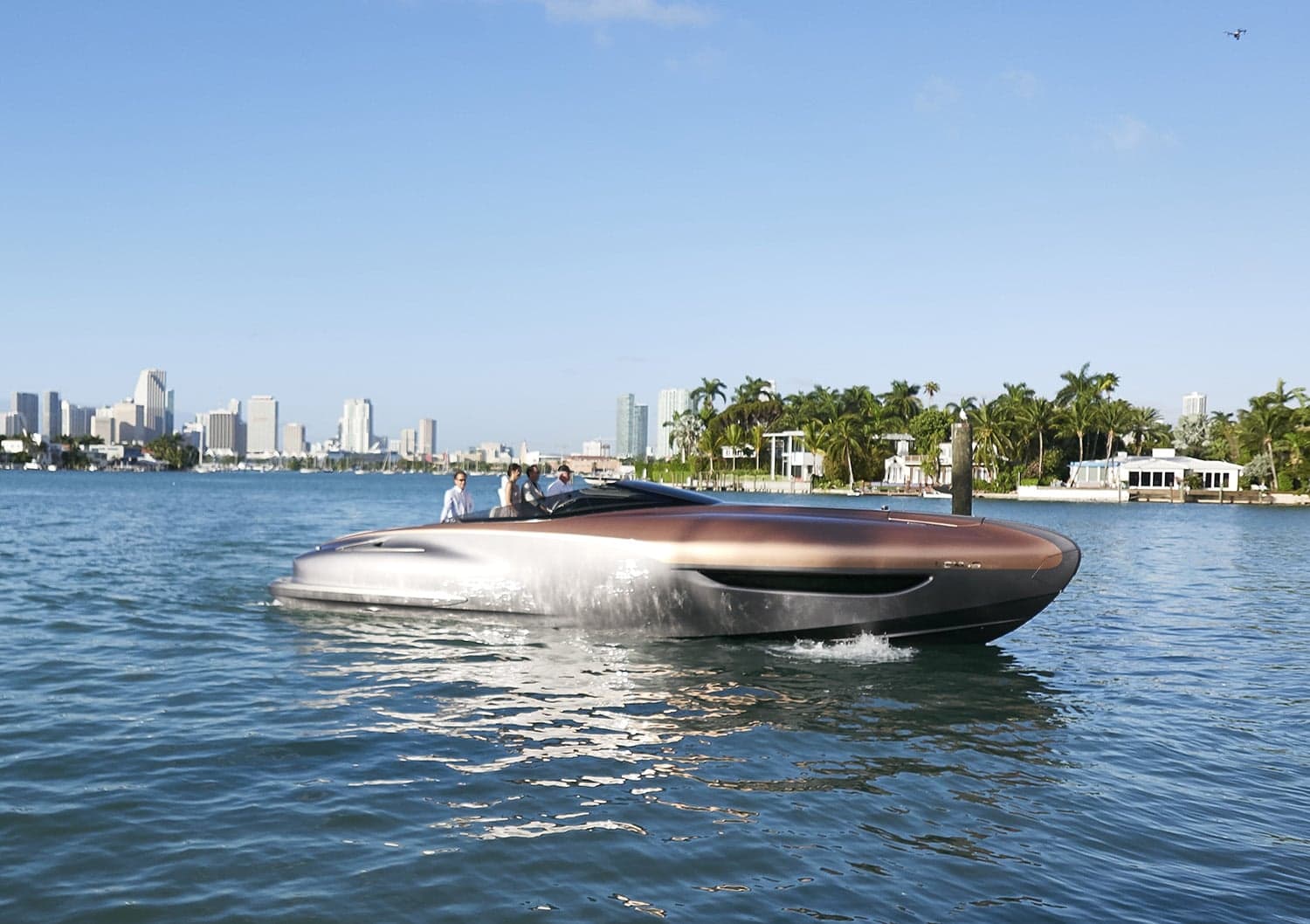 The sun has fully risen, along with Miami’s famously humid heat, when the first untraditionally automotive Lexus product is revealed. The Lexus Sport Yacht concept is “a design exercise that applie[s] Lexus design language to a luxury marine experience,” according to one of its head designers. Its real visual impact is made clear when it cruises along the Biscayne waterway to the Lexus Mansion dock and the entire press corps detach from their breakfast tables and coffees and migrate to the water’s edge, fiddling animatedly with their Leica D-Lux digital cameras for the first-time-anywhere photo op. Aboard the boat are design heads fresh in from Japan, and Akio Toyoda, president of Toyota Motor Company, the parent company of Lexus. This is a rare and hushed appearance, almost stately. Mr. Toyoda makes some prepared remarks, and then we’re invited to ogle the watercraft.

Like with the bus, I’m the first one on the Yacht for a spin around Biscayne Bay. The ride lasts eight minutes, precisely, about seven of which are spent chugging wakeless in the Venetian Island narrows and admiring the Yacht’s interior parlor, it’s beautifully hand-laid hull, the wood decking, the NASA worthy digital control center, and the twin 440hp high-performance Lexus 5.0 litre V-8 engines — visibly hot and glaringly metallic — through hardened glass in the stearn. For one minute in the ride’s middle, those engines roar to over 6,000 rpm and your attention is lost in a rush of speed and the sensation of wind-snapped clothing against your skin. For all its “design and luxury” nomenclature the Lexus Yacht turns out to be a marinized race car, cheek flapping fast. 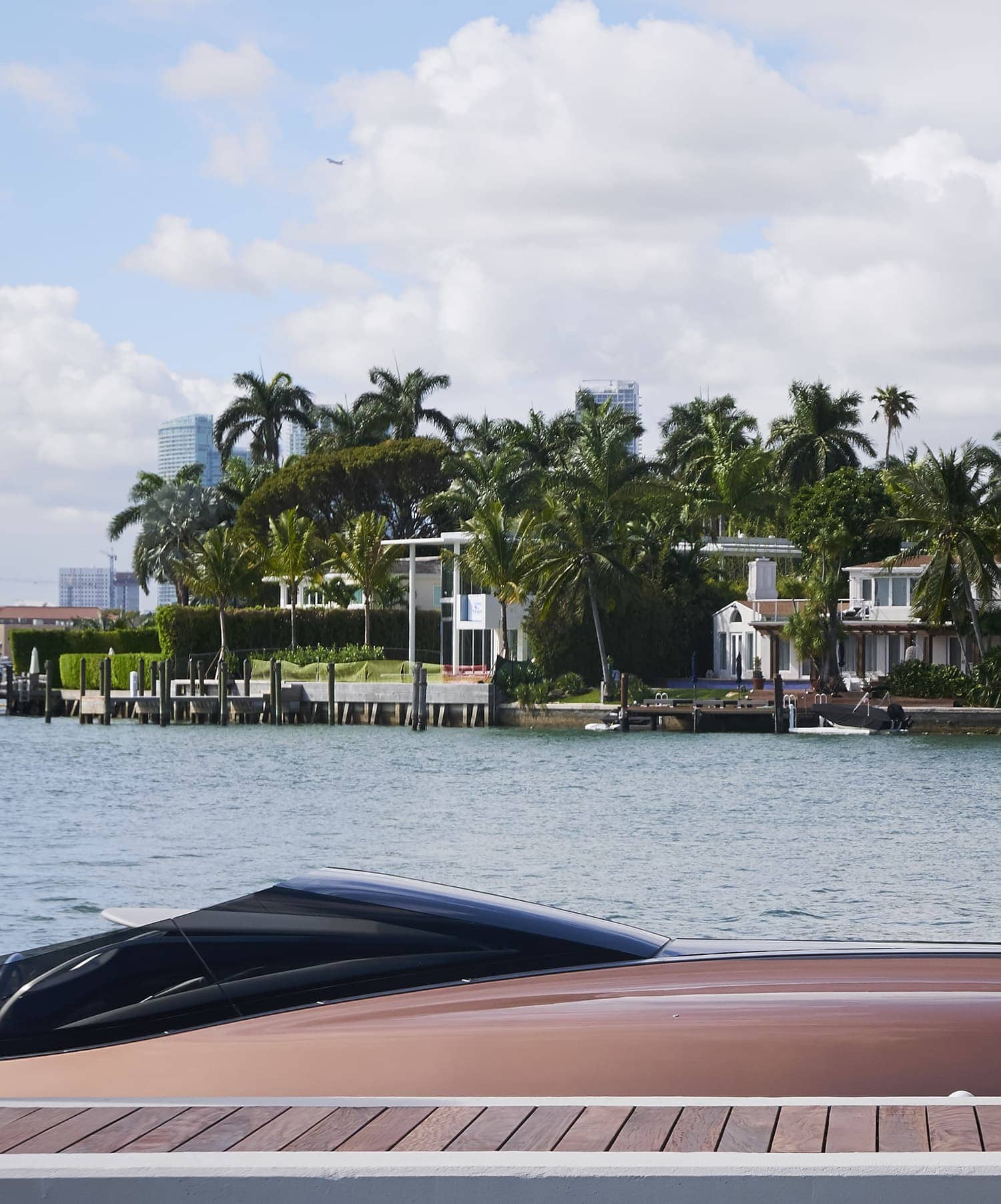 Separated into regional groups, we’re chauffeured to respective events. My group’s fleet of Lexus LX trucks takes us to the Herzog & de Meuron designed 1111 Lincoln Road, a mixed use shopping, dining, and parking experience, and, for our purpose today, a photo studio. There are three models here, a female human one and two Lexus’s. British photojournalist Greg Williams, currently a celebrity reportage lensman and the BAFTA awards’ official photographer, will be showing us the ropes. By now the press corps have fiddled into a working relationship with their cameras. Williams speaks loud and clear, and directly, belying his former life as a troubleshooter capturing hard-to-look-at images in war-torn Burma, Chechnya, and Sierra Leone. “Don’t be afraid to talk to the model” he says, encouraging us to snap shots of the human female as she poses near and often atop a Lexus LS. “You want to emphasize the lines of the car by staying low,” Williams admonishes. Much of his hortatory direction deals with angles, leaving the creative process mostly a personal one. 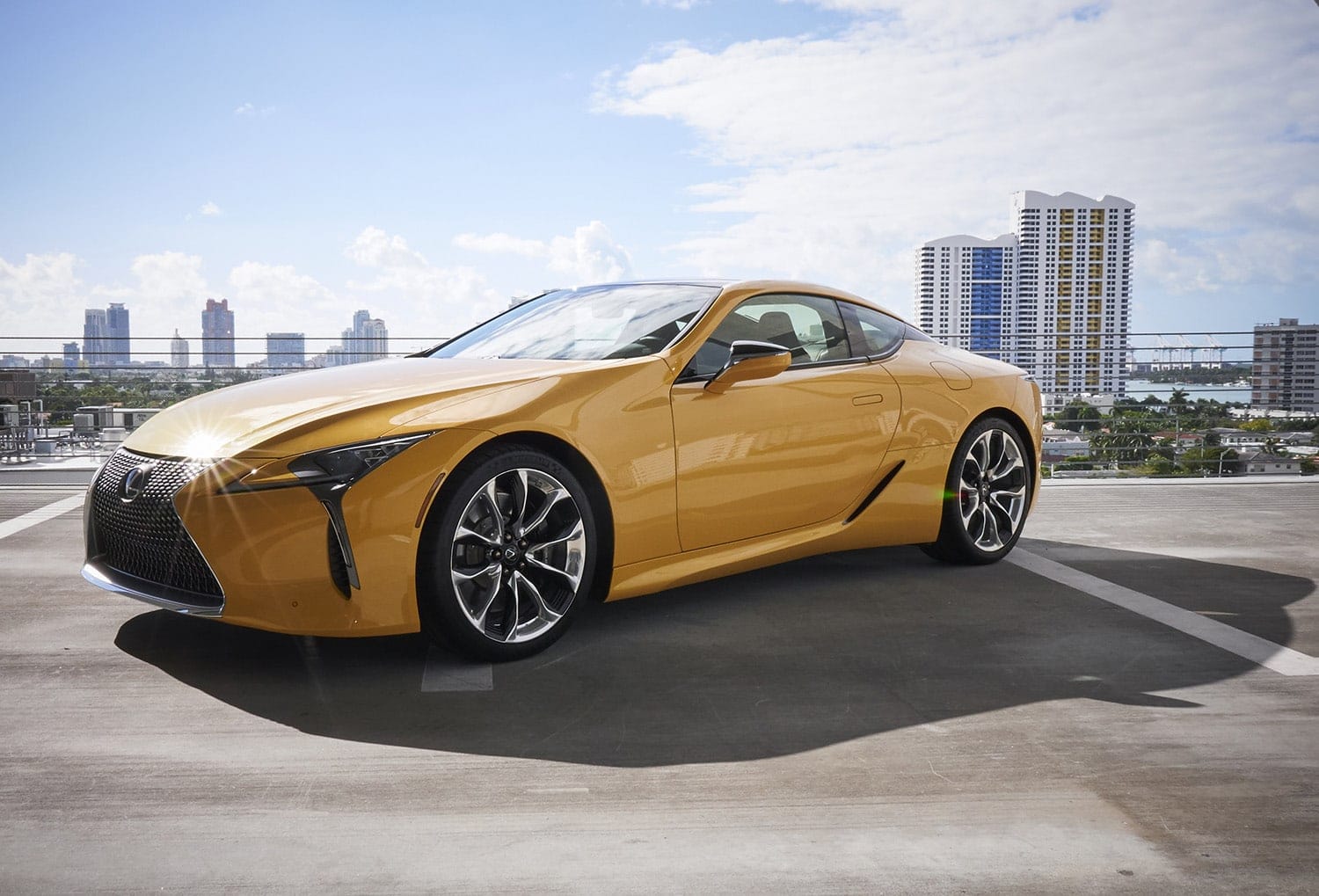 The newly designed LS was revealed in Detroit a few days earlier. The LS’s chief designer, Toshio Asahi, is watching the undertaking like a proud dad. He’s also available for comment, and after the nascent snapsters hang up their camera and pull out the old steno pad and pencil, Asahi spells out the LS design concept’s three Es: “Exclusivity. Emotional. And Ecstasy,” he says. Some of the final E’s meaning is lost in translation and a native English speaker from the Lexus team hastens to clarify what all US car enthusiasts understand univocally as “Sexy”. 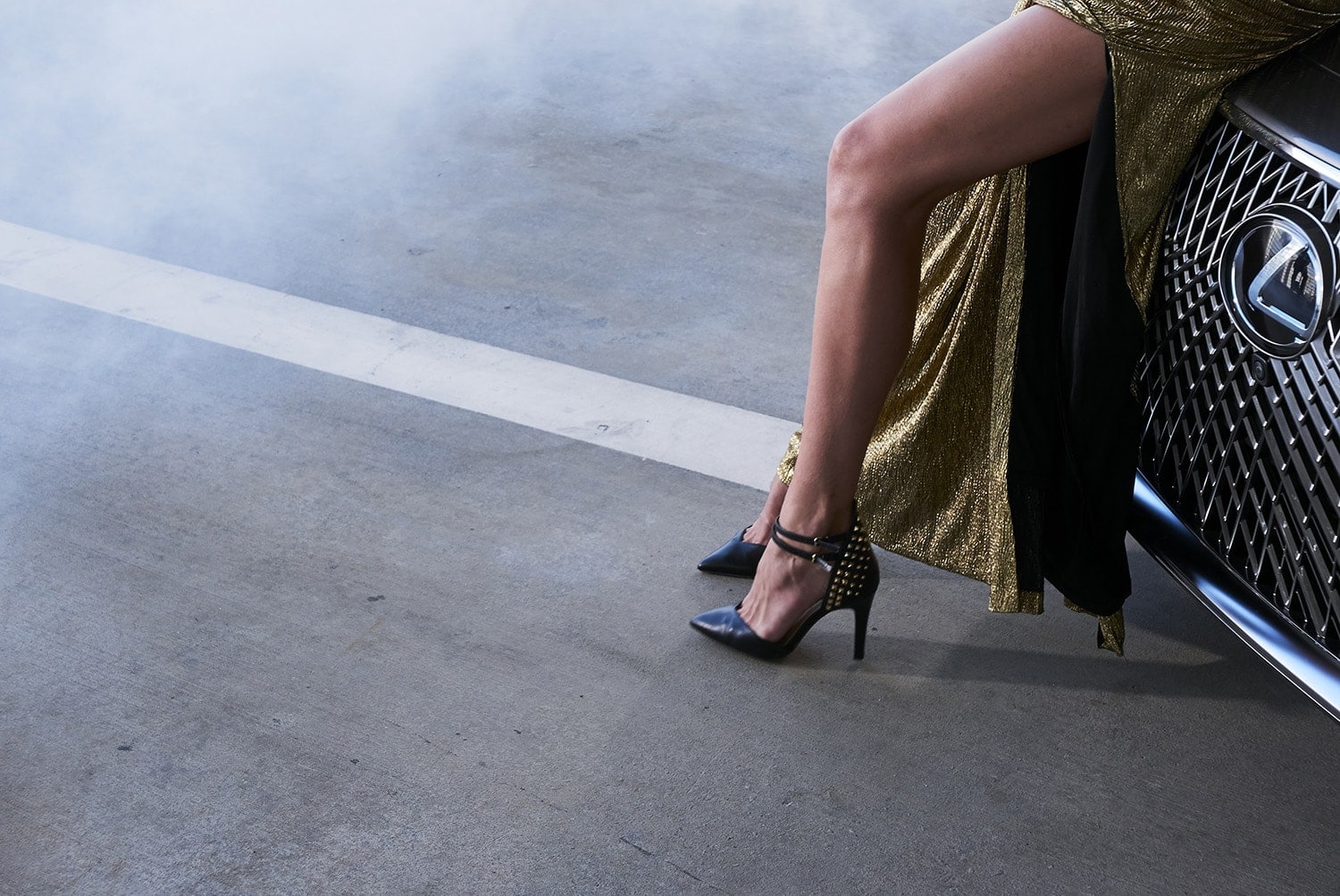 Amanda atop the Lexus LS.

I ask Mr. Asahi: If we were standing in your office during the LS’s design, what would the mood-board look like? “James Bond, with a beautiful woman,” he says. Which Bond, I ask. “Daniel Craig is maybe a little too hard,” he says thoughtfully. “Maybe Sean Connery [era as Bond].” Why Connery: “ He is a Playboy.” And what Bond Girl do you imagine in the passenger seat or, maybe, in the backseat: Asahi politely declines to answer, gesturing instead towards our live human model, a lovely Brazilian named Amanda.

We’re driven back to the mansion for lunch. The temperature is up in the 80s with rainclouds looming. On the other side of the Venetian Islands the Lexus Sport Yacht is making its sixty second dash through Biscayne Bay with a sound like something unfair being done.

There are, of course, blatant automotive reveals, too. For that, we’re choppered across the Everglades to the Palm Beach International Raceway. The experience here is decidedly more hands-off. Instead, we’re paired with professional drivers who put us through an acceleration, cornering, and braking clinic, while also seemingly trying to induce vomiting. “I can’t even tell you what I’ve seen people do to these seats over my career,” a professional driver (and young Tom Cruise lookalike) tells me at the end of one particularly jouncy ride. However, the carnival of speed reaches its peak down the “road course” back stretch where Scott Pruett, an official racecar pilot for Lexus, inducted me into the 140 mph club — with an extra mph for good measure — in a 2017 Lexus GSF (my working assumption here is that GSF stands for Goes So Fast).

The night caps off at the Faena Forum with more food provided by Lexus Culinary Masters and, with the driving now finished, an open bar. Scott Pruett is on hand to toast his 140mph club inductees, along with Lexus USA department heads, and the lovely Brazilian, Amanda, sporting the Lexus Design Award-winning Shape-Shifter Dress. The best way I can describe the dress is Haute Couture chainmail. Which doesn’t sound flattering but is a beautiful piece and signals to what comes next. 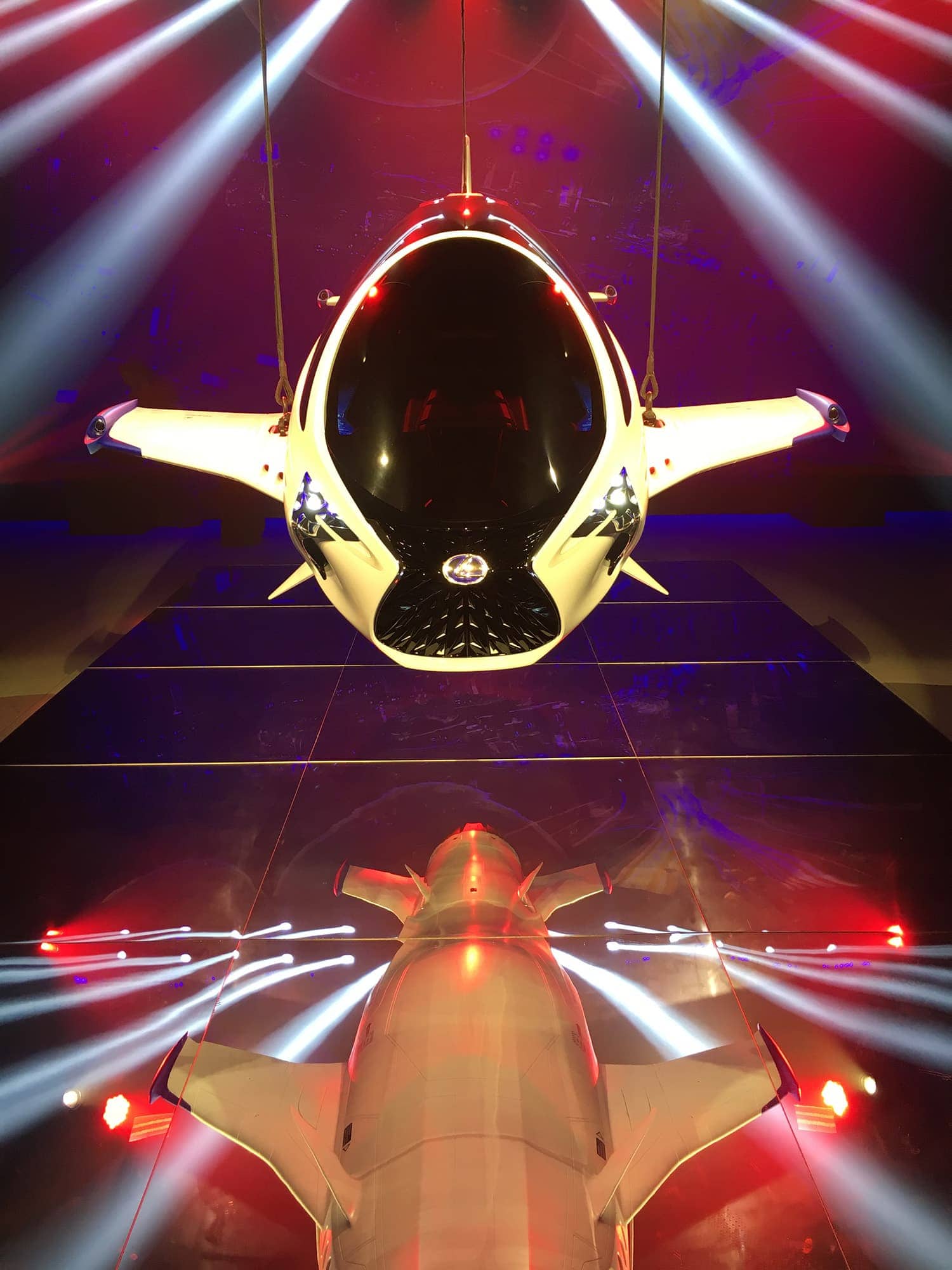 The “Skyjet” was designed by Lexus Design Center in collaboration with the Valerian film team.

Beyond the physical challenges of propelling and preserving machinery, Lexus continues to evolve its brand through imagination contests. That involves collaborating outside its wheelhouse. For the Luc Besson directed film, Valerian and the City of a Thousand Planets (U.S. release July 2017), Lexus Design Center worked the Valerian team to create the Skyjet, a vehicle grounded in reality but befitting a film world set 700 years in the future. As Lexus continues to develop their picture perfect line of roadcars, their “relentless pursuit of perfection” just may take them airborne. They’ve already got the sea covered.

Special thanks to Prue Hyman at East Coast Lexus, Communications.