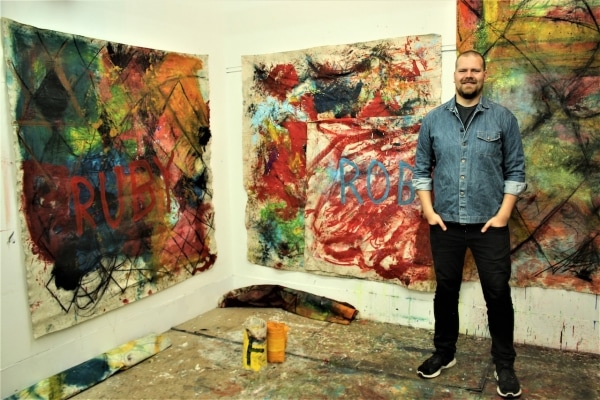 Jukka Virkkunen at his studio at RCA, London

I can’t pre-meditate what I’m doing. I’m working in the moment.

I first met Jukka Virkkunen at a gallery opening in Bermondsey, London. Our conversations ranged in topics from literature, philosophy, travel, and of course, art. As it turned out, Jukka was a painter who was in London to get his masters from the Royal College of Art.

When I entered Jukka’s studio at RCA for the first time, I found that the size of his paintings (both cosmically and physically) matched the magnitude of his impact of color. Bright blues, yellows and pinks blasted across the canvas in shapes of flowers, lines and dots. I watched him paint on one exceptionally large canvas. He went over parts of the painting that had already been placed, completely covering them with new shapes and outlines.

‘It’s part of my process,’ he explained. ‘When I’m not working on the canvas, I actually turn it against the wall so I can’t pre-meditate what I’m doing. I’m working in the moment.’ 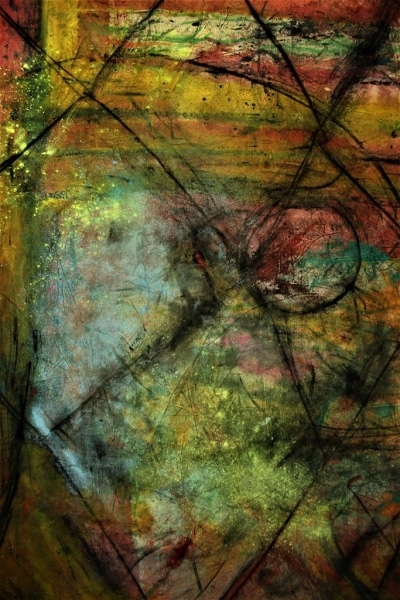 I’ve seen people layer over their paintings before. One of my favorite painters, Ronna Lebo (whose work I have two pieces of), uses this very technique. I’ve always admired the commitment it takes to follow through on such an act, and often feel this practice mimicks life where things are only ever partially revealed to us. Humans bury things. We enclose things within the body. Additionally, I’ve never heard of someone turning the painting away. This idea added an additional aspect of truth for Jukka–one where he was now allowed to grow and exist with the painting in real time.

While his paintings were beautiful and risky, I found that compared to my conversations with Jukka (which went from philosophy to art to money to existential crisis), that something about his work looked clean. Each abstract shape was painted with smooth edges and a flat finish.

Months later, I returned to Jukka’s studio. What I found on the walls were completely different stories. The pinks turned to reds. In his new method of layering, aspects of the canvas were left blank. Words were added. What was once a controlled exploration of color and process had turned into an expression of the soul. 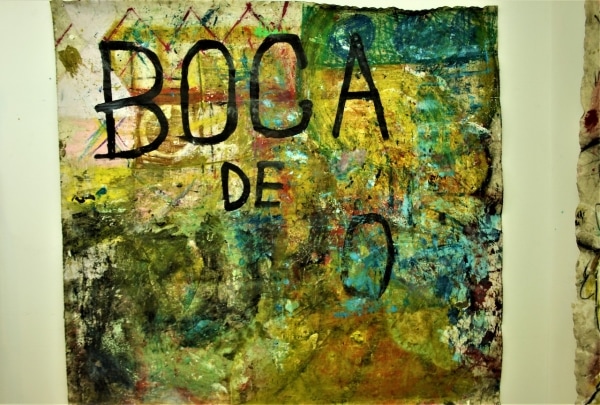 ‘Wow,’ I said, my arms outstretched wide. ‘What happened?’

He explained to me that when he was studying in Brazil he had been inspired by color. When he had returned to Finland he took the technique he had learned from school, but was stuck in a style. ‘I always thought I don’t have any restrictions, but since January I’ve been unwinding my own preconceptions of what painting is. I was full of habits. I was stuck in a motion. But piece by piece, I took everything apart.’

I asked him what instigated the change. For Jukka, just being in a different location, the city of London, it added inspiration. ‘Plus,’ he added, ‘I realized I just had to go through things. Like these over here–.’ He guided me to a set of paintings of flowers that he had done since the last time I was in the studio. They were on much smaller canvases with large, child-like outlines. ‘I don’t actually like these too much,’ he confessed, ‘but I had to go through this in order to make what I have now.’ 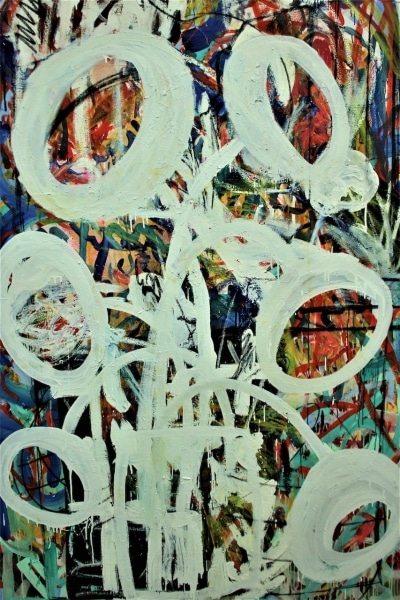 I reflected on something very important that artist Lisa Levy once said to me at a gallery opening years ago in New York. ‘You have to put in the work.’ At that point I was only twenty-six and didn’t really know what she meant, but now that I had gone through the process of writing, trashing a novel, workshopping, re-writing, I did. And Jukka did too.

‘Yeah. If you want to be great, you can’t ignore it. It needs to be done.’ Doing the work of the different paintings was something he grew through, and became more of his process than painting over things.

‘I like all your paintings,’ I began, ‘but your newer stuff really stands out. It looks expensive.’ What I meant by that was a combination of quality, innovation, but also practice and the experience that said practice brings. Living through art can be painful. Doing the work requires patience, and also confronting yourself and learning to be free. It’s crazy. Sometimes you don’t know what you’re aiming for or what it’s all for. It’s fucking hard. But Jukka did it, and the outcome was tremendous.

Jukka told me the studio now lives in the new set of paintings. He rolls the canvases up when he’s not working on them. Sometimes kicks them against the ground. The physical reality of the canvases’ lives, combined with the understanding of what to do once it’s time to paint is his new voyage. With Jukka, the evolution which was built up over time and exposed itself in a stroke of genius, proved a point. 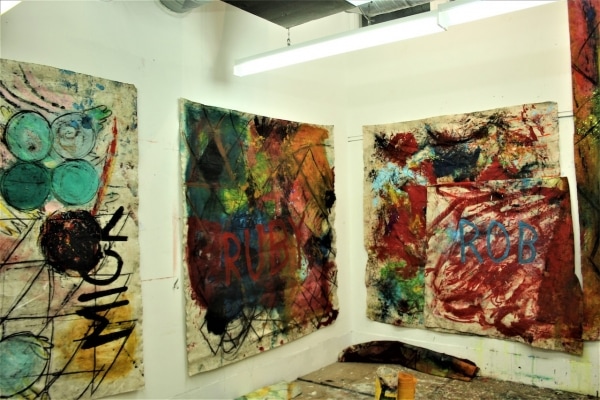