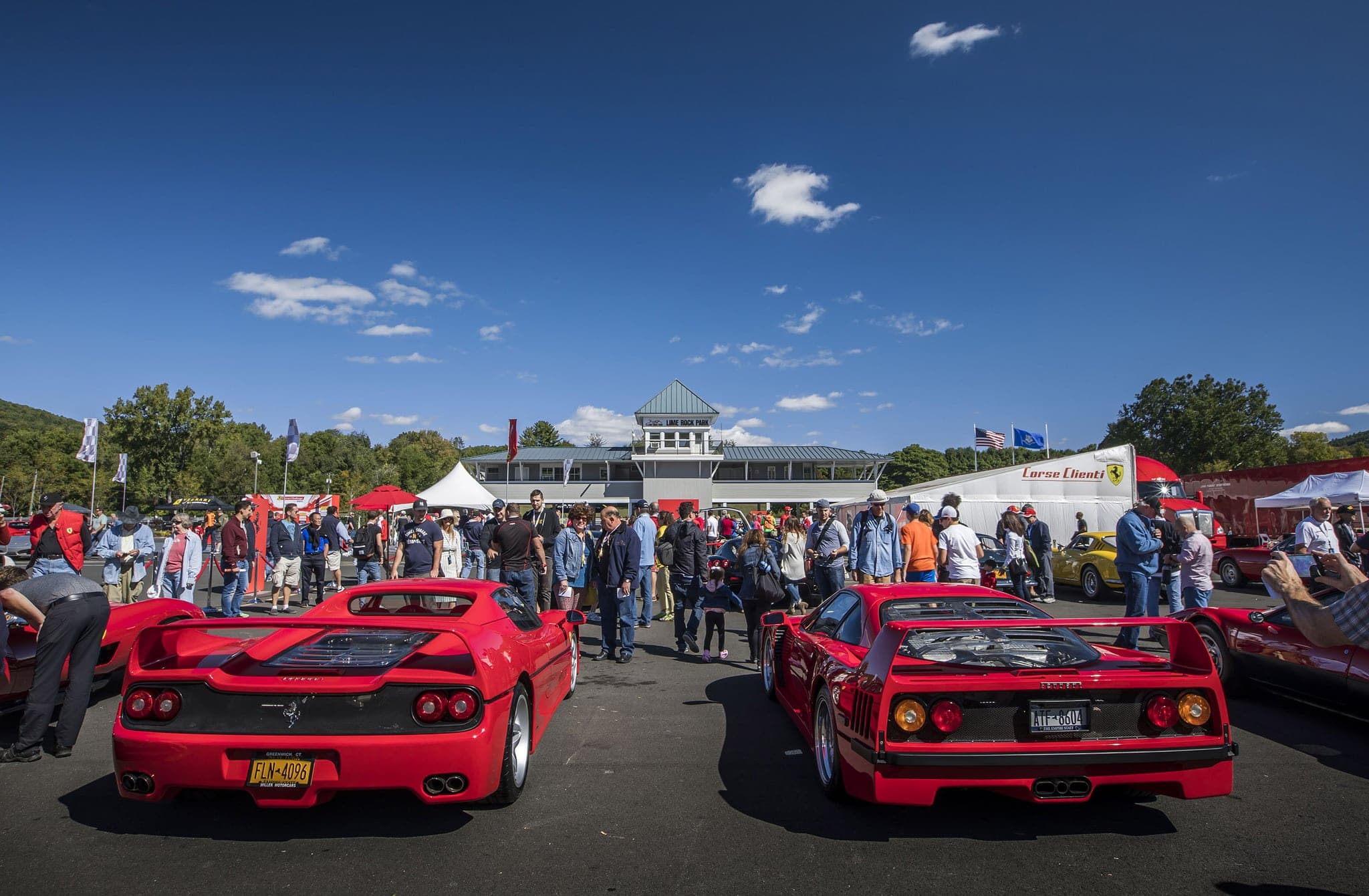 Hello Officer Red The Ferrari Challenge series is a circuit event in which owners, not professionals, compete against one another

What’s a hot lap? I think, even as my hands are on my lap, in the passenger seat. As a passenger. And now we’ve already turned a bend I hadn’t seen coming. With this much torque—zero to 100 in six seconds—you don’t see things as they present themselves; you only see suggestions. Real time becomes a succession of ghosts, spectral sensations receding in your rearview. Real time is the time it took to think about the last thought in words. Form it into a long straight line as we zigzag a lap and make our way toward another. One and a half miles. Twelve seconds. Twenty-two seconds. I suggest you close your eyes.

I’m riding beside Didier Theys, head coach of the Ferrari Challenge series and former 24 Hours of Daytona and 12 Hours of Sebring champion. We’re at Lime Rock Park, which hosts the Ferrari Challenge, a circuit event in which owners, not professionals, compete against one another. I’m neither an owner nor a professional, but if the helmet fits, I’ll wear it. At least that’s what I told myself when I shook Didier’s hand and a crew member closed the door behind me.

Prior to my hot lap, another member of the crew handed me a black nylon ribbon. “Your sock,” she said. “Put it on.”

I examined the sock, stretched it out, bent down to bring it toward my shoes. No …

The crew member interrupted, pointing to the helmet I was holding, tapping her finger to her head.

So I placed it over my scalp, under my helmet, and the helmet fit. Sort of.

It was half-past noon and I could hear my stomach growling in between and all around the constant growls of the prancing horses. Lunch at hospitality, moments earlier, seemed irresponsible with the hot lap rapidly approaching. Much better was a generous pour of a Centine Toscana at the bar. On the first lap I barely make out a billboard that says Drive to end hunger. On the next, another which says Drive even faster. Didier, who must notice my frantically scanning of the dashboard, the rearview, the wheel, leans over to ask, without really asking, “This is fun, right?” 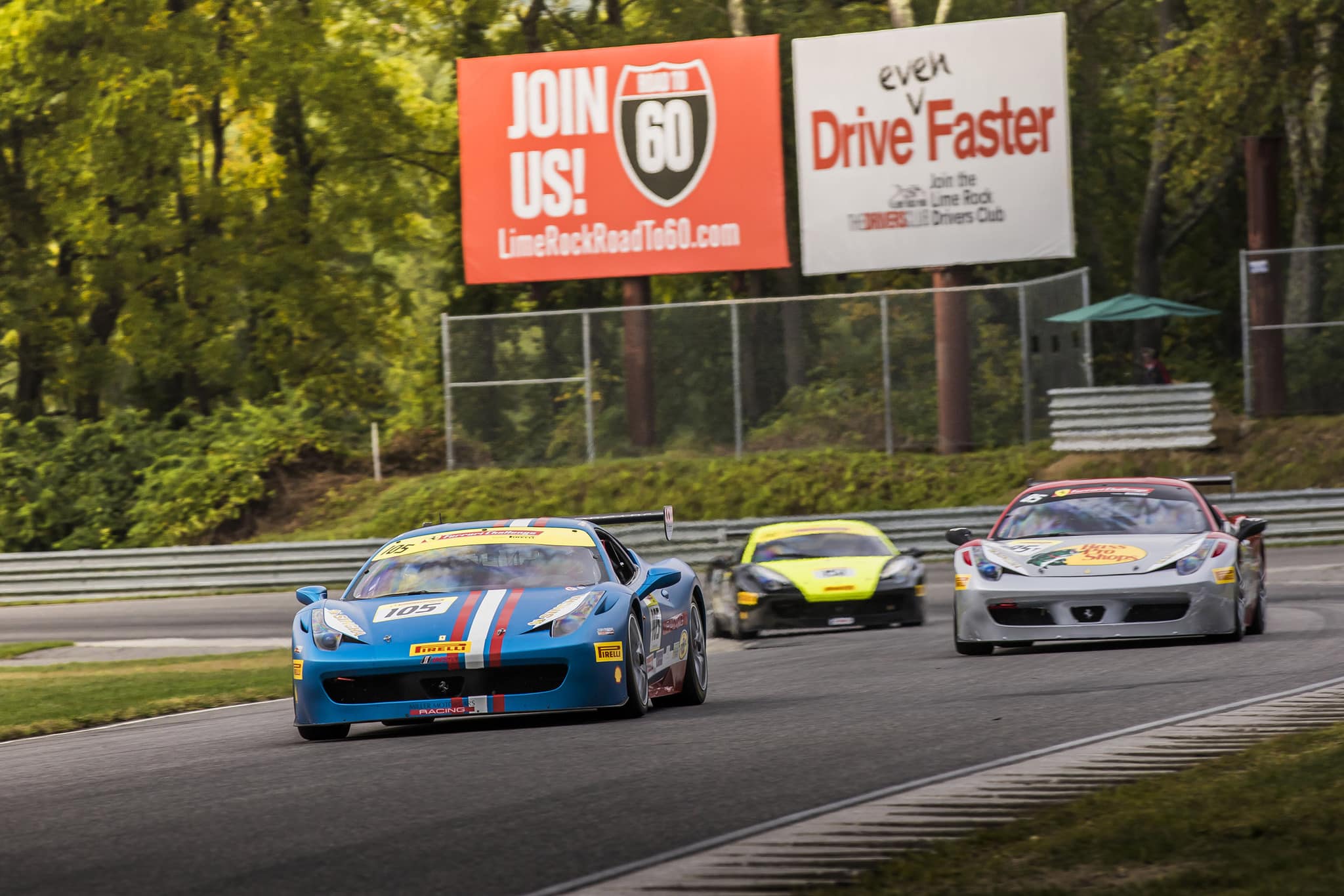 I nod, or at least I try to. I’m just trying to re-capture this even as this escapes me. At eight thousand revolutions per minute, you can’t even really feel your self still in your body. We go around once. We go once more. How many quarters does this game take? I think, as we continue, navigating tight corners and shifting over chicanes before we finally halt to a sudden stop in front of the crew. I touch my hands to my cheeks. Everything is back where it was. Everything that I was before is still here. Sort of.

“It’s a different way of thinking,” she says, as I shake my head loose and re-adjust to the stillness. Time passing in real time. “Isn’t it?”

The Ferrari Challenge began in 1993, organized by Ferrari for the benefit of Ferrari owners who wanted to race. These aren’t professionals. They’re owners of their cars. They’re drivers. And unlike the professional circuit, a palpable air of kinship overtakes the spirit of competition at the track and in the paddocks. Drivers bring their families, families bring their lawn chairs. Some people race for causes, like UNICEF. Some people race for pleasure. Everyone roots everyone on. Spectators play badminton and bocce in between races, on the rolling hills and mounds of grass that overlook the track.

Elsewhere, guests can vote for their favorite Ferrari of all time, a history of the automobile parked and on display beside museum-like labels indicating its model and year. Within the hospitality tent, attendees can hop inside a replica and experience what it’s like to virtually navigate the six tracks that comprise the North American Challenge circuit. Even the toilets, which demand a foot on the pedal in order to flush, are outfitted to recreate the racing experience.

In the paddocks, where I follow my Ferrari contact around, nodding my head and writing down notes, technical details and questions to ask her, unrelated lines for a poem, children are rolling tires back to their parents’ cars.

Likewise, much of the Ferrari Challenge embraces this aspect of participation, a mode and a model that is rooted in Ferrari’s Corso Pilota program, exclusively available to its clientele. After registering, Corse Clienti are set up with coaches and trained in driving on courses that get increasingly more technical and complex, culminating in the Corso Pilota Challenge course which prepares each motorist to compete in the Challenge series. Show me our drivers, Ferrari seems to say, and we’ll show them how to drive faster, the pursuit to push their driving limits in a racetrack environment. Time entering the body.

And accompanying the spirit of mutual exchanges and communal good faith is the fact that no driver has any technical advantage over another. The Challenge is a single-marque series, which means that the challenge itself resides less in the technology available to drivers and more in the skill of the driving, and what drivers can learn from their coach. In fact, besides the livery design and number, the carbon fiber rear wing is the only aspect of each car that can be modified. Same engine, same tires, same machine. Different drivers. 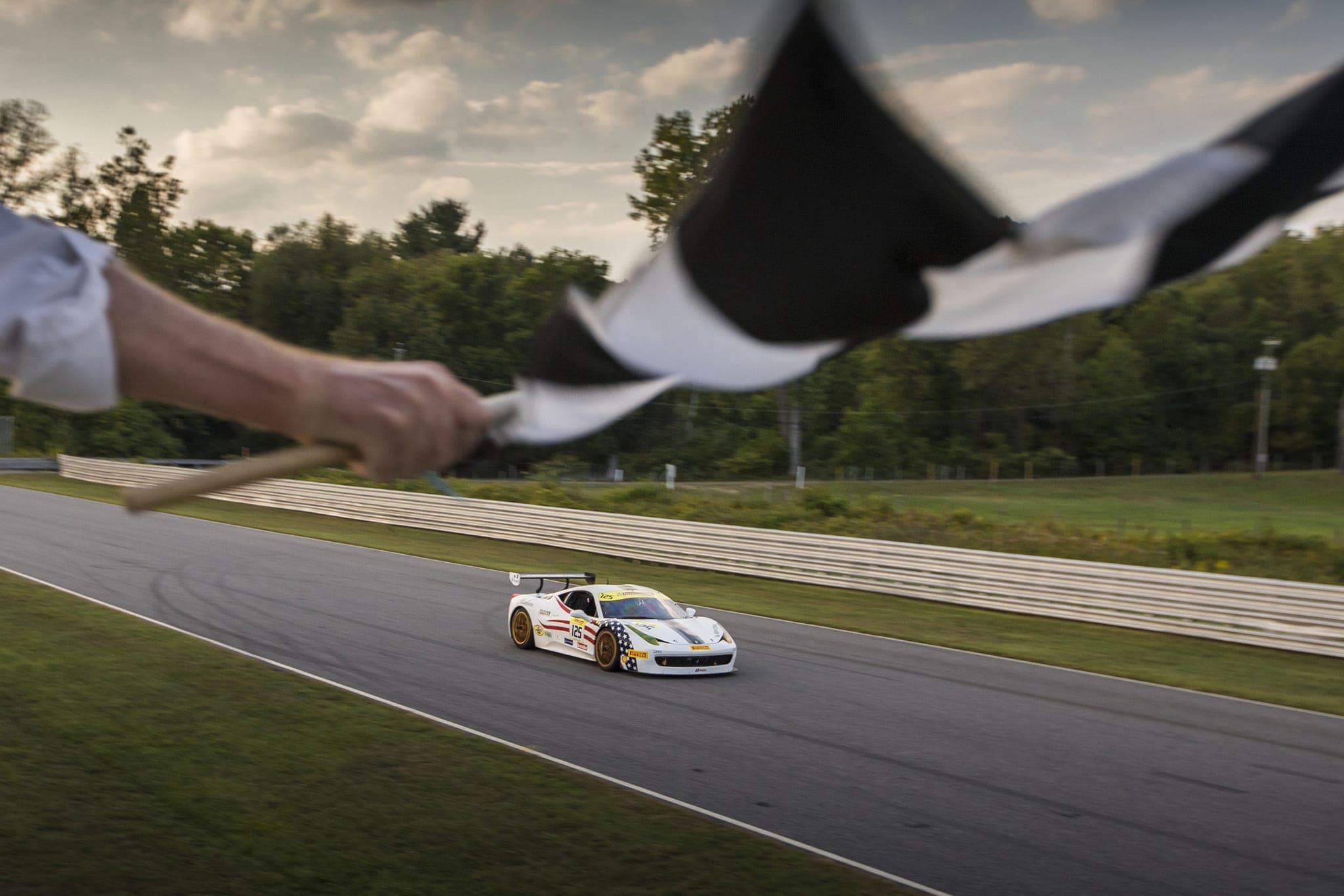 Matt Keegan’s No. 125 car races down the straitaway

The first driver I meet is Matt Keegan. He’s a rookie who just completed the Corso Pilota program and received his racing license last year. On Friday, in the first race of the weekend, Keegan finished first in his class despite his radio kicking out a quarter through the first lap. “They could hear me but I couldn’t hear them,” he tells me, one day later. “I had to do some thinking instead of my crew thinking for me.”

Which is unusual in today’s world of racecar driving, in which each car is outfitted with a Go Pro and a V Box that tracks video and data of the car’s performance on the fly. But also unusual because driving a Ferrari racecar is Keegan’s heavy-pennied form of meditation. “Driving a street car is like business,” he says, comparing the functions of his gallery of Ferraris. (He owns nine.) “I do conference calls in my street cars.”

The racecars, of course, are much more raw. “To be fast in a race car you have to drive it to the limit of the tires,” Keegan explains, as his Ferrari of San Francisco crew re-calibrates his white 458 EVO before the next race, analyzing the cache of data made available through the V box. “And yet the only time when I can quiet my brain is in the racecar. There’s just something about it …” He trails off and I hear a roar beginning to pick up, trail off, resume. A long, slow, continuous roar. A self-referential roar. “With all the noise going on in the world, everything just starts to slow down.”

He shakes his head and laughs. “I don’t know if that makes any sense.”

It’s a different way of thinking, I think, recalling my contact’s words. It’s the body under extreme speed. It’s the pursuit of solitude. The desire to escape ourselves.

The temporal monument of a sock.