Death of the Artist:

Of unmarked cars
As in a stakeout cop
A feel in secret
All fish under—
Remember?
The pleasure of getting
Wet, drying

A mound of shit
Did I ever
Mention I couldn’t
Read words until I was six?
A whole life
Half-listening
To my mother & father

Speaking in each mother
Tongue, to be confused
Or maybe just to be alone
Silent & sitting
Closer to the sound
Of it, do you happen
To know any tricks for better

Living? Left
Right, up, down
Select or something
Similar, still
Time enough
Before I leave
To get sated for a few

Singles, something singular
& hopeful, a hushed word
Of thanks or thankless
Prayer. Who knocks
At this door?
(Long pause in which you swallow)
Who answers? 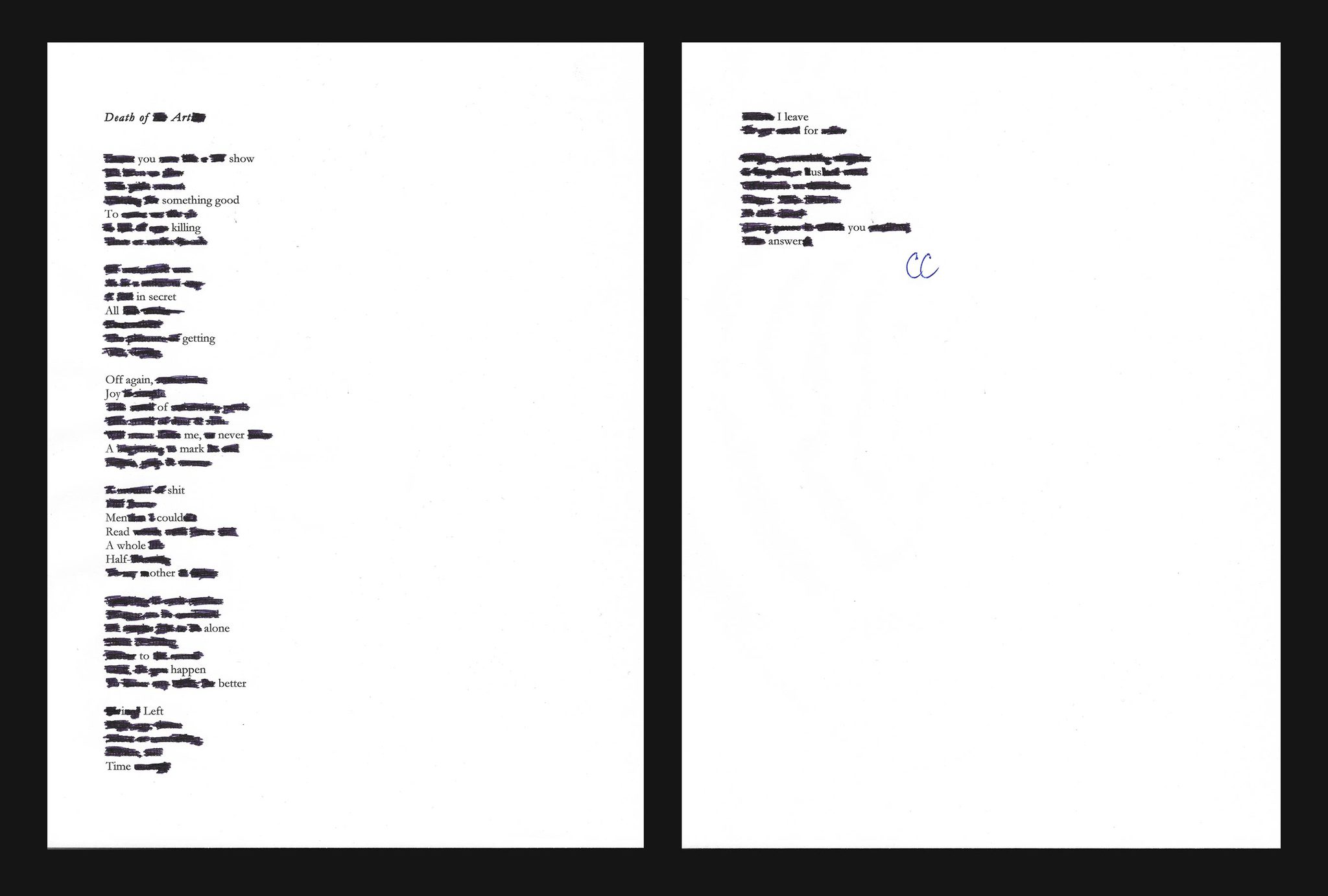 Black out poem Death of the Artist by Chris Campanioni

Context in offering to the poem Death of Art

I have a number of habits, not all of them bad, but all of them tied to some degree of abandonment. All those photographs, being photographed, running in the rain and snow, in the dark of dawn, in the moment between sleep and waking, between recognition and forgetting, and most of all, writing. All these require the same act of self-immolation: Bare yourself, dissolve yourself. At the same time. And you have to be willing to do both. You have to be willing to recede into the ether at the very moment you reveal your soul. That contradiction inherent in any artistic expression is reconciled through the work of art itself. Experience becomes sense; sometimes sense becomes experience, too.

A lot of my work endeavors to re-evaluate narcissism, or at least how it is classically considered, and to see how narcissism has taken shape, literally, through our screens and the filters and shading an Instagram picture affords us. The inverse to narcissism, of course, is self-effacement, and it’s this relationship—between self-love and self-dissolution—that instigates all artistic production, and which also sparked the entry point into my first nonfiction book, Death of Art (C&R Press). In the book, as in real life, I’ve always felt defined—and limited—as many of us do, by the way people perceive me when they’d think to look; literally by my face and flesh. Physical beauty is celebrated in the fashion world, but it’s not easily understood or valued in other industries and roles I’ve negotiated and embraced. During these moments, beauty constructs both pariah and parody, the mark of transgression or trespass to remind me how often we’d prefer to think in binaries instead of assemblage. To make this beautiful again, I’d often think, I’ll have to tear it apart.

When my award-winning debut novel about the fashion industry, journalism, and Latino identity was published in 2013, hardly anyone wrote about the book itself; newspapers, magazines, journals, and critics were a whole lot more concerned with its author. Everything outside the text occluded the text until it replaced the text. I wanted to kill the author, or remove myself from my body, physically and psychically, and maybe it’s no surprise excision is the first major plot point of Death of Art. I start by cutting out my face in every fashion editorial I’ve ever been in; the title poem mirrors this aim and aesthetic: creation through removal, a black out of another poem titled “Death of the Artist.” Here they are, side-by-side, reconciled again, narcissism and self-effacement, the death of art and its artist, and the invitation to create your own. 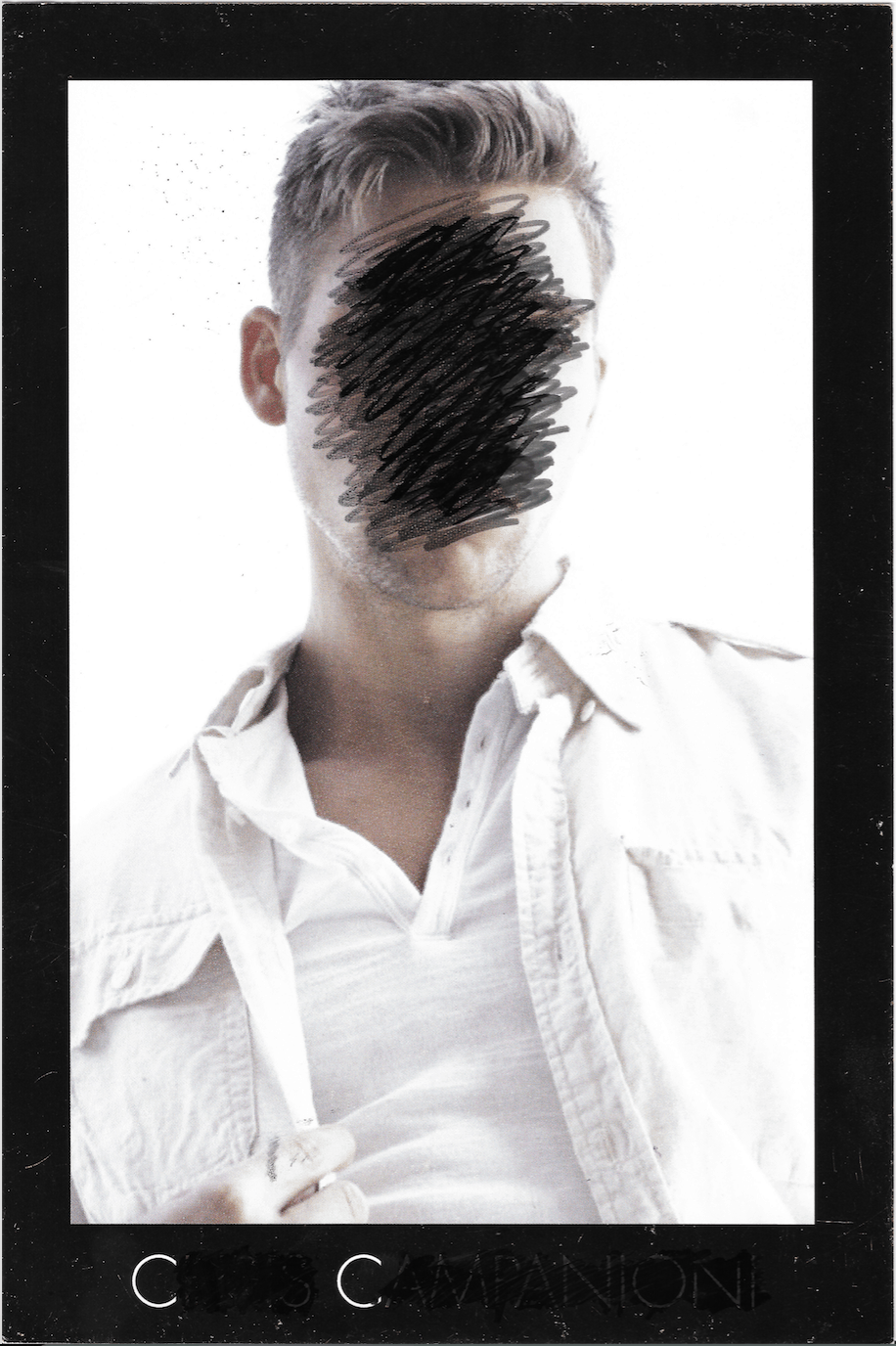 My Self Erasure, front view. By Chris Campanioni 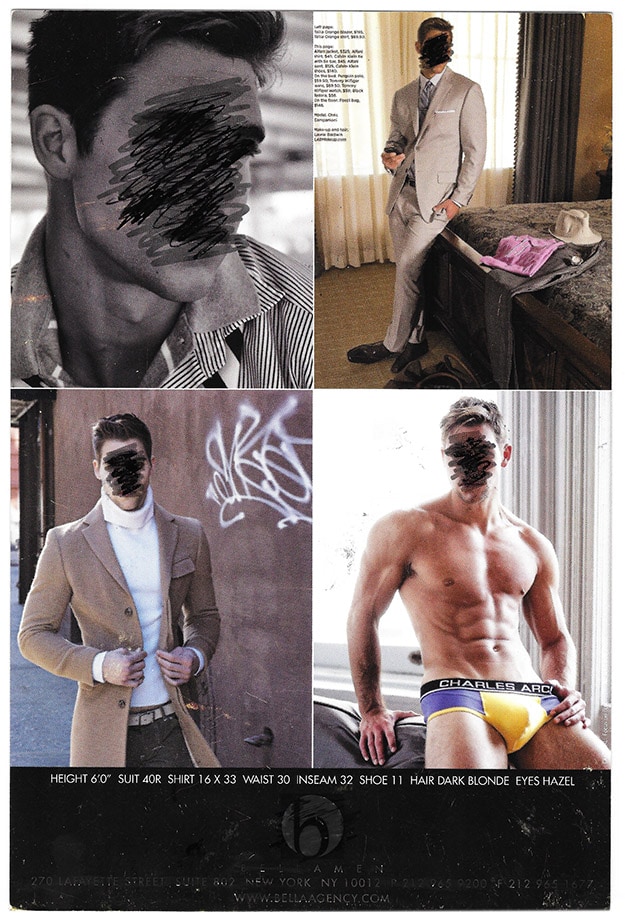 My Self Erasure, back view. By Chris Campanioni