Dallas Athent talks the Bronx, writing for nobody, her new book of poetry Theia Mania,  & her not-so-secret life as a poet 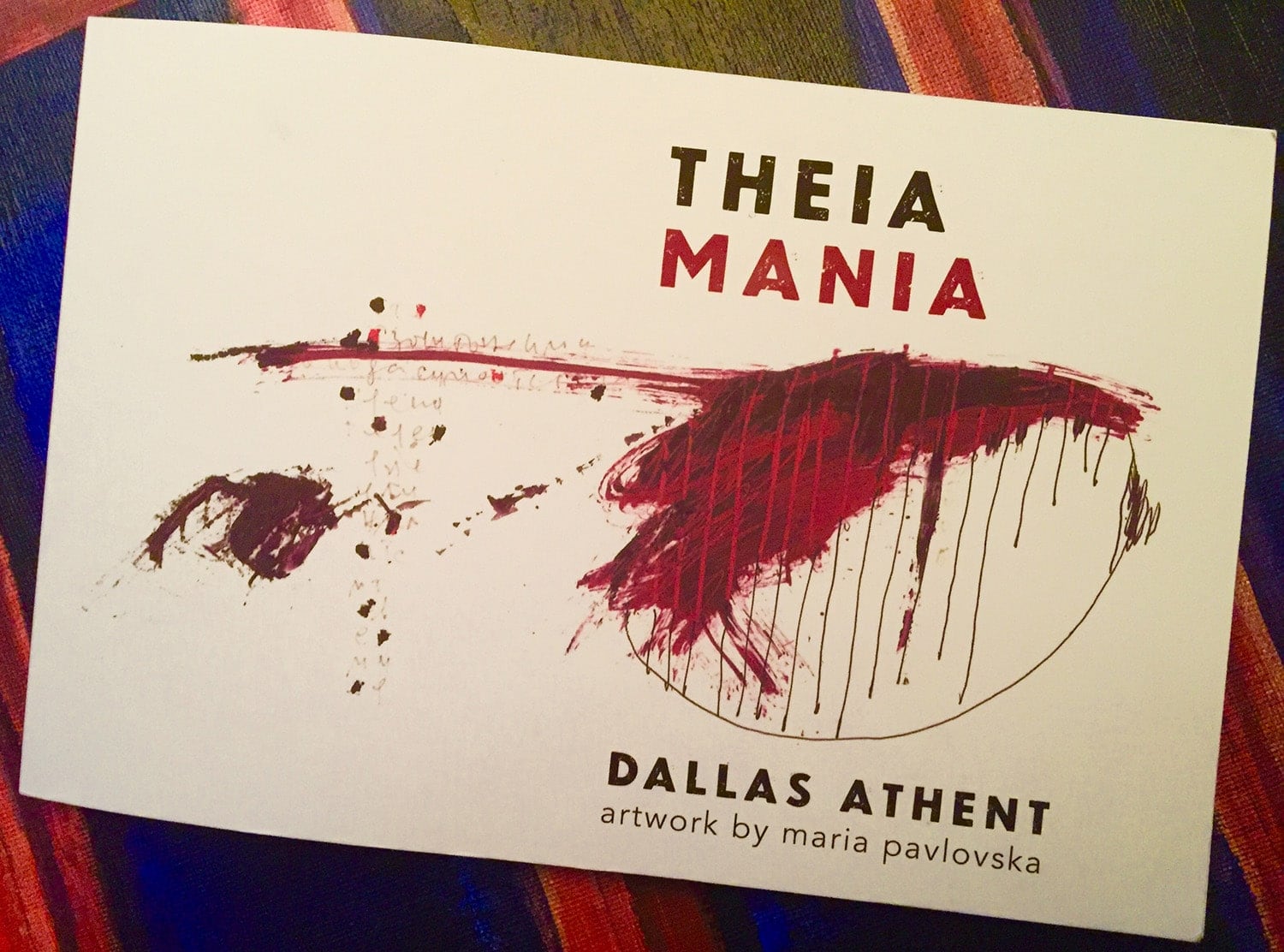 If you don’t know Dallas Athent, you should. Not only does she write with wit and irreverence and relentless momentum, she is a tireless advocate for all things indie — routinely publishing and promoting writers and artists in the Greater NYC area. Theia Mania, her first and potentially last book of poetry (more on that below), comes out this April and is truly a physical art object. Panorama-style page spreads present the reader with an evolving abstract dialogue between Maria Pavlovska’s B&W illustrations and Athent’s words.

As for the text itself, Theia Mania is an endlessly entertaining and oftentimes profound whirlwind of untitled poems tracking a narrator burning so bright it’s inevitable she’ll combust. The volume touches on identity, ambition, capitalism, philosophy, relationships, and religion. One choice excerpt:

i am a scumbag
goddess.
the kind that looks like she might be ok.
the one who surprises you
with vodka in a waterbottle.
who let this bitch in the church.

I had the opportunity to connect with Athent ahead of what’s been dubbed “The Last Book Launch on Earth,” to be held April 30 at Mana Contemporary. Here’s what she had to say.

Nathanial Kressen: You’re a prolific figure in the NYC arts community as a fiction writer and editor, online contributor, visual artist, and events coordinator / board member for Nomadic Press. Now it seems you’ve been living a secret life all along as a poet. How have those roles influenced your poetry?

Dallas Athent: I don’t think it’s been too much of a secret I’ve been writing poetry since I’ve been performing it for the past few years. I’ve also been fortunate enough to have poems published in amazing places like PACKET Bi-weekly and YES Poetry. I will say that now I’ve written this book of poems I’m not sure I will write another one, at least for a very long time. I was really introduced to it after writing essays for Luna Luna Magazine a few years ago since the founders, editors and contributors like Lisa Marie Basile and Joanna Valente are all poets. At the same time I was studying the occult, including W.B. Yeats who I still consider to be my favorite poet of all time. I was inspired so I wanted to take on the challenge of writing poetry since it’s much more abstract and concise than getting down into the nitty-gritty of characters and plots when writing a novel. So the roles of being in the writing scene in general is what introduced me to poetry for sure, but I don’t consider myself a poet really.

Theia Mania — Tell us about the title.

I just mentioned my studies of the occult. When I first started getting into tarot cards one of the basic things you learn is more about the Platonic elements. Getting deeper into Plato I was most fascinated by his idea of “Theia Mania,” which is a state of being beside oneself that brings you closer to “God,” whoever that God is. The idea explained the feeling of catharsis that I get as a general human being, and how that aids me to doing better and better work. So the collection of poems is sort of about the downfall of man and how oddly enlightening that is to experience. In a way it brings us closer to the divine. It’s very existential.

Pictures of an Atlas
playing baseball with a
semi-automatic weapon and the ball = my <3.

The ball is now far out in the distant desert
while you’re at home base with your
boys and a beer and you will
always always be death
to me.

Were these poems always a collection in your mind or did they sneak up on you? Were there any surprises as you pulled them together for publication?

There was no planning. They all sneaked up. Sometimes I love them, sometimes I feel like another creative asshole.

Your publisher AntiSentimenal Society specializes in “experimental collaborative publishing projects,” and Theia Mania definitely fits the bill with an abstract cover and interior illustrations from Maria Pavlovska. Walk us through finding these collaborators and how you decided they were the right fit for your words.

So the whole thing is very bizarre. Maria Pavlovska — the artist, is someone I met since she’s married to Prospero Vega. Prospero is a writer who was raised in Bushwick who I published two stories from in Bushwick Nightz through a random submission. We became really close as writer buddies. Then I started doing these poems and had the idea of Maria’s art going alongside them because her work is all about the process of making art, and not planning for an actual outcome. The images are out-bursts of dark, light and action which really went with the theme.

At this point, since I was new to poetry and have never been to school for writing I was really leaning on people to help me with the work. I met Ronna Lebo at a party and had been sending her the poetry after reading her work because she’s a really fucking amazing poet herself. She gave me great feedback which allowed me to overhaul everything on a high-level. She also happened to be a co-founder of Black Square Editions alongside Boni Joi and John Yau and she had this idea to start an imprint for up-and-coming and experimental books, thus the newly born AntiSentimental Society. I told her I trusted her with my work since she was such a great help and she said she wanted to publish the book.

Boni helped edit the work immensely, but I still wasn’t sure on how the poems themselves were formatted. We gave Eve Siegel who’s a professional book designer the images and the text and she ran with it. She really made it an art object and breathed life into the design. The whole thing was very easy and serendipitous. Nobody had disagreements. Everyone had a role and something they were truly needed for. It really isn’t my book, I have to say. I will say that about most of my work–that it’s mine. But this is really an object beyond me that belongs to all of us.

Oh man. I really don’t know because I read things in my head and can only assume others read them that way. That’s the importance of showing your work to other people. I had a lot of italics originally in the poems and capitals, because when it was my duty to read it would remind how to inflect my voice, but when I reviewed them with Boni she basically told me this was confusing people who read it and aren’t me, so we made edits. Thank God she was there!

Do you have a writing routine?

The Bronx appears quite a bit in these poems, where I know you’re a gleeful homeowner. Here’s your opportunity: Tell us what’s so awesome about New York’s uppermost borough.

The Bronx is the shit. I live in Riverdale which is like a different world from the rest of NYC. I go to Brooklyn a lot for events at GAMBA Forest or to host for Nomadic Press at places like Christopher Stout Gallery, and I work in Manhattan, but I wake up everyday in The Bronx and go for a walk along the Hudson and know the Yankees, who I grew up driving into the city to see, are on the same piece of land as I am. It’s very old school New York and secretly has the best pizza and the best views.

[…] i date at
the park and the palace. get drunk in
the comfort of couches. take the train
to the city. ask boys out by dropping
a wink. sex and we don’t usually do
this. compliment a mom on
her cooking.

buy a
leopard
print
something. develop a crush on his friend.
feel lonely looking at skylines
wish this dinner was from me
to you. blast some good
old sinatra. do be
do be do
be do. 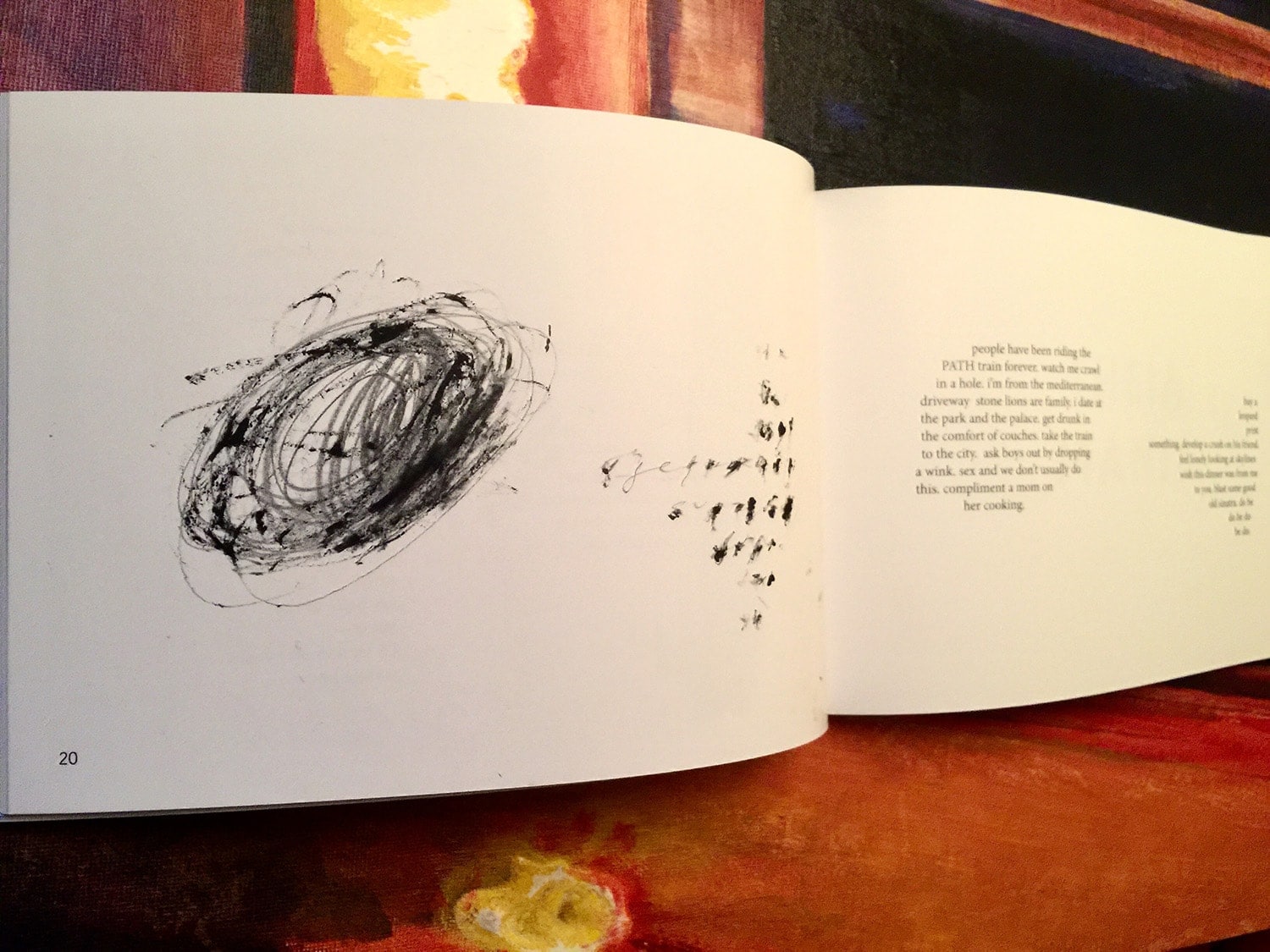 Have you started work on the next book? Any projects in the queue you’d like readers to know about?

I have two novels that I’ve written that are unpublished and my Agent at The Rights Factory is shopping. For projects I’m going to have a solo show in November at Reservoir Art Space and curating a group show for my birthday in August, but other than that I’m laying low for a while just curating events for Nomadic Press and doing art reviews for At Large magazine.

Any words for aspiring writers?

Write like nobody will ever, ever read your work. Honestly, there’s a good chance they won’t. But it will also allow you to stay more honest, which will make them want to.

Nathaniel Kressen is the author of two novels — Dahlia Cassandra (named Best of 2016 Fiction by Entropy & Luna Luna Magazine) and Concrete Fever (Bestseller, Strand Book Store) — as well as the co-founder of Second Skin Books and the leader of the Greenpoint Writers Group. He is currently finishing up his first collection and embarking on a serialized fiction experiment with At Large magazine.