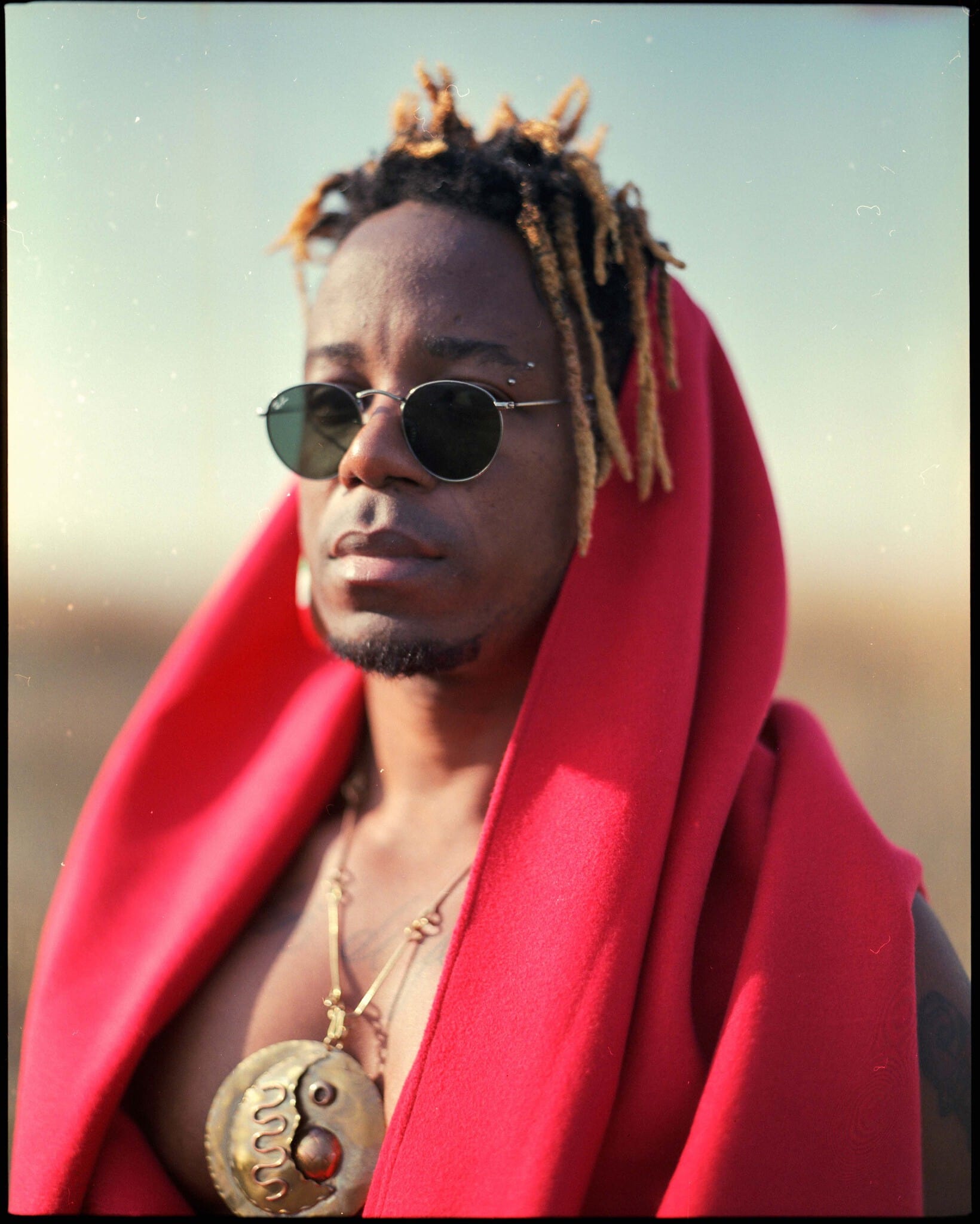 Describing Blick Bassy enters into uncomfortable territory for me and I have to ask myself why it even matters where an artist is from and how that informs his art when his voice and music transcends cultures and genres? It just does. I can’t ignore the fact that he looks like a warrior prince with dark skin and a face that almost looks chiseled by a sculptor rather than created by two humans. His English speaking voice is not exactly French-accented (one of the two official languages of Cameroon—English is the other, though there are over 270 languages spoken there) but perhaps a melody all his own that allows him to sing in his native Bassa, a language that doesn’t have to be familiar to be understood.

Bassy is a Cameroonian born singer, who is one of a family of twenty-one children who now makes his home in Northern France, tours the world with his blend of folk music and multi-instruments that stretch and weave folk, rock and classical genres. His latest album, 1958 dropped today, June 21 via No Format/Tôt ou Tard/IDOL.  His single “Ngwa,” HERE shows Bassy not just as an artist and individual in his own right but as an oral historian who won’t let events from more than sixty years ago lose their significance through the haze of time.

Bassy will launch the new release in the U.S. with a performance at SummerStage on June 30. The album follows Bassy’s 2015 album Akö and is a celebration of the heroes who struggled and died for the independence of Bassy’s native Cameroon, including Ruben Um Nyobé, the anti-colonialist leader of the Popular Union of Cameroon (UPC) who was murdered by French troops on September 13, 1958, two years before the country became independent.

There are so many ways to listen to Bassy’s music. You could listen to the entire album unaware that it is a tribute to a man who is an underappreciated hero of a hard fraught war of an African nation’s independence from European colonialism. Take the song Lipém, which is probably my favorite on the album. I don’t understand Bassa and I don’t know what the lyrics mean but I will argue there is more than one way to listen to a song. Musically speaking, it has mournful layers that just beg to be chiseled away by the listener. The lyrics both echo and contrast the music which vacillates between a multi-instrumentalist composition that has almost an EDM vibe to it and a lullaby-like quality that makes you want to listen to it in a room so dark, with a person you trust yet cannot see but can only hope to share this breath of a song with.

Listen to the entire album, style is tricky to define. Bassy is just good. His music is more than one human being, more than his composition, more than the history of a complicated nation, and woven together by a land of nearly three hundred languages that is geographically about the same size as Texas with about four million fewer residents.

I had the chance to chat with Blick Bassy on the phone moments before he went on stage in Lisbon during his European tour a few weeks ago about his latest album, 1958.

About the throughline of the album, the story, and the process

When I started this album I first I went back to Cameroon. and while I  was there, I met some witnesses who were present during this historical time. My grandfather was hiding in the forest with my mother for more than a year because they were killing all the people who knew about Um Nyobé, his friends and all the guys who were fighting with him. I met a lot of people but it also was about the [war] actually, in Cameroon, but also in some other African countries. There was carelessness for me, coming from the fact that our country is built on a foreign structure. And when I was in Cameroon last year, I was really surprised about the fact that it looked like both countries in the area still are just walking around, turning around and never going farther. 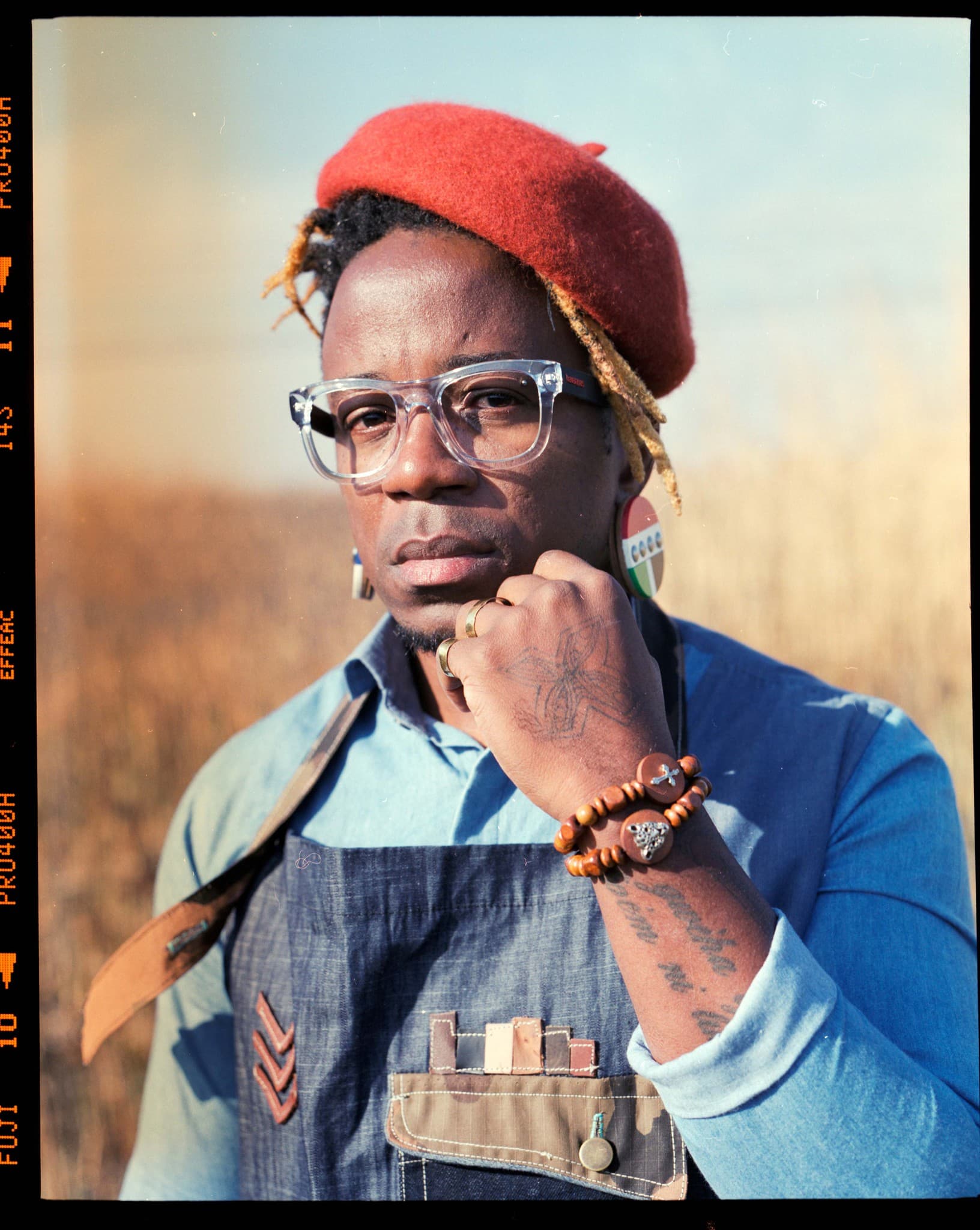 On the gravitas of each song

And then I went back with reading about all the stories about what happened in my country. And so every song is a kind of set. Walking on a journey, and every song, for me, I decided to write every song, like I said… sometimes talking to my people and asking them what they’re doing now because there are some people who died for us. But we also have a responsibility. What are we doing with our responsibility?

And another song. I’m going just to paint some different scenes, showing that we actually have a new generation hiding behind alcohol, drinking every day, because they’re trying to create a new world because the actual world is really, really hard stuff for them.

So I was really writing every song like a step into this journey from now to even on the way.

On where Blick grew up and where he lives now

I grew up in Cameroon and have been living in France for 13 years now.  I’m trying to go back to Cameroon every year. And the thing is that, actually, I really shouldn’t. Things start being really tough there, and that is complicated to go back there. I wanted to go this year, and I’m really engaged. And I’m thinking, I’m talking about what is happening. Actually, we have a prisoner, a guy who [inaudible 00:06:38]. Then this guy in prison because he was talking against the government.  So actually, it’s complicated to go back there. And I’m living in France, but it’s like I’m living in the world because I’m living in France but touring a lot, so I’m meeting those people actually. I have a show in ten minutes in Lisbon, Portugal. And tomorrow, I will go back to Paris. Yesterday, I was in Nijmegen, in Holland. I’m living in France, but I’m living also… I’m meeting human beings everywhere, and it’s wonderful because it’s helping me understand how beautiful our world is, but also, how difficult.  Capitalism really killed this world because people are living just to be employed. Not just to have a good living, but just to find a job to pay some taxes, just to pay the bills, not just to build a life.

On the Capitalistic irony of the iPhone ad?

I was making this ad with iPhone, which for me was just to show that I was in the right way. So I used to tell them that, “Look, I’m singing in Bassa, one of 270 different languages in Cameroon.” And I did an ad for this huge company singing, being myself. Just doing myself. Singing in my own language. Singing songs, melodies from my place, from my culture, from my tradition, from my tribe. So being ourselves is really one of the most beautiful things we have. That each one, every human being can have.