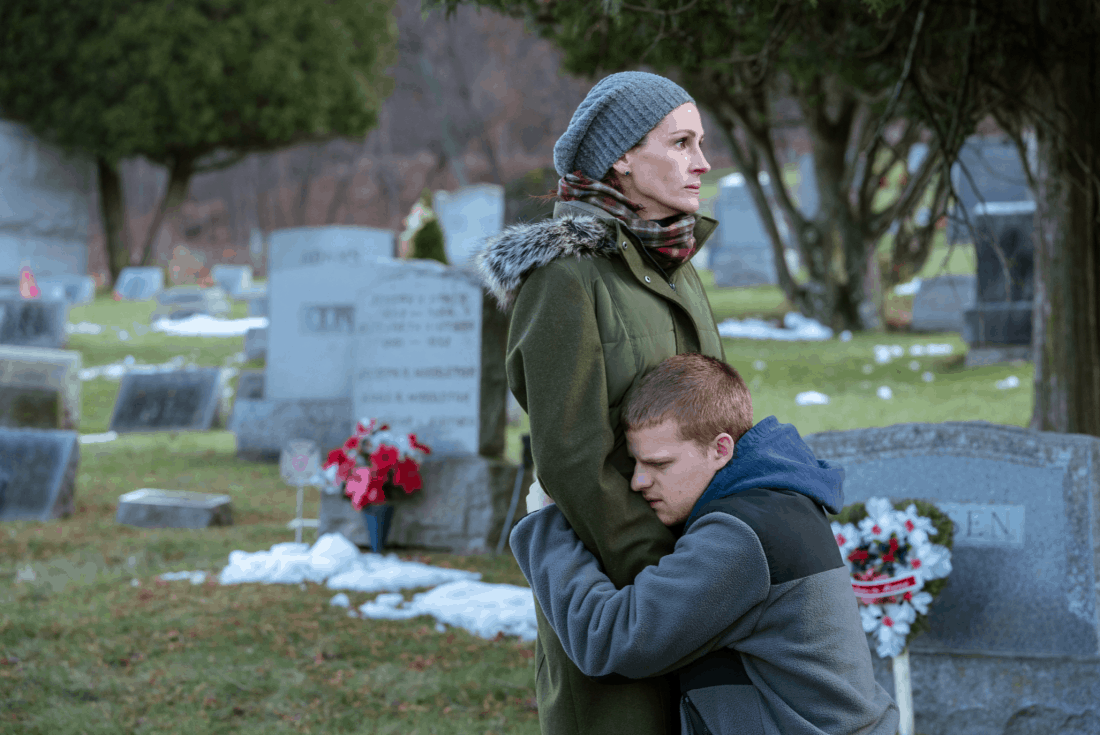 Nothing should be eating Peter Hedges. The Iowa native and Academy Award winner wrote and directed, Ben Is Back. My theory is he had to write a screenplay and cast his son, Lucas Hedges, if he wanted to spend time with him. I can say few things with certainty and one of them is Lucas Hedges did not need his father to write him a screenplay—Lucas is everywhere from the big screen to Broadway. In the past two weeks I’ve seen him in two movies and one play. He was remarkable in all three. And yes, I saw him in Jonah Hill’s Mid 90s the month before. Just pick a superlative. Other than playing young men roughly close to his own age (he’s now 21), none of the four characters are alike. Mid 90s—frustrated, abusive older brother, Boy Erased—outed gay son of hyper religious parents, sent to conversion therapy who (gasp) doesn’t hate his parents and grows up to become a successful journalist. In Kenneth Lonergan’s The Gallery at Waverly Place, Lucas plays the only grandson and neighbor to his declining grandmother who he adores. But to hold his own in a Broadway theater with Elaine May, Joan Allen and Michael Cera? To know when to let Elaine May steal the scene by being her straight man endeared him to the entire audience. I harbored concerns about Ben Is Back, because getting drug addiction right isn’t an easy hat trick. Ben Is Back isn’t an addiction movie. It isn’t a referendum on the opioid epidemic in this country. It isn’t a PSA about the evils of narcotics. It is a film about what happens when one member of a family becomes lost and can no longer connect. 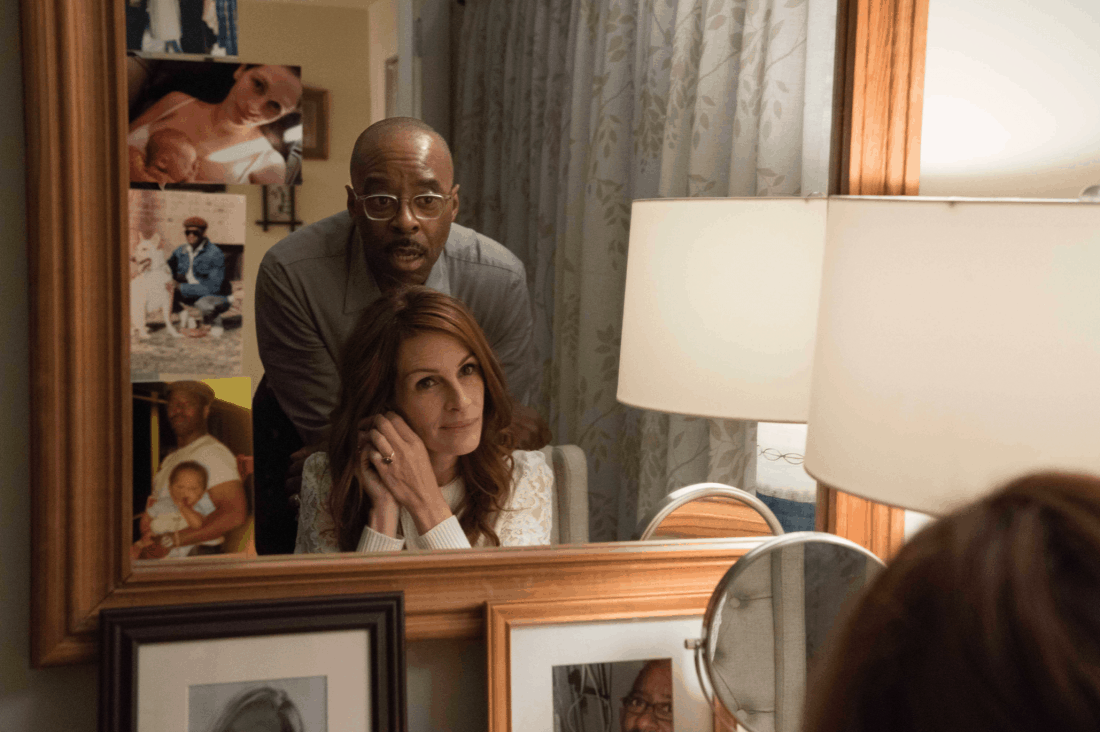 Julia Roberts and Courtney B. Vance

in BEN IS BACK Photo credit: Mark Schafer. Courtesy of LD Ent./Roadside Attractions

I bet my Rolling Stones tickets that Lucas Hedges does not have Daddy issues. The Hedges family is exactly like what I wish my family had been like. Mom, dad, two kids—the aforementioned parental units achieved a work/life balance raising two highly capable, successful young men. Try to read out loud the next sentence without taking a breath: Peter Hedges (Director, Writer, Producer) is a novelist, playwright, screenwriter and filmmaker. Mom is poet and actress Susan Titman. Hedges dreamed up What’s Eating Gilbert Grape, adapted Nick Hornby’s About a Boy, for which he picked up an Academy Award nomination and began directing films in 2003. The thing about Lucas that gets to me is that unlike a lot of other actors of the moment, I forget that I’m watching Lucas Hedges. It’s subtle but even his face looks different in each movie from how his jaw is set to his gaze.

I’m not a proponent of “tough love.” Nothing against twelve step programs but I’ve read multiple articles indicating that they really are not sustainable. It is possible to be addicted to opioids and to recover. I know drug addiction comes disguised in many forms and delivery systems, but I think it takes a certain personality to stick a needle in your arm.  Not having any mental health training other than being the recipient of thousands of hours of therapy, I’m not qualified to give advice. Some people may find the film difficult to watch, it’s like knowing you’re going to drive by an accident on the highway and looking anyway. This isn’t Trainspotting (which I unapologetically adore), Peter Hedges does not find any humor ironic or otherwise in families being destroyed by addiction.

In upstate New York, in a wealthy community, a mixed race and blended family is dealing with what happens when a drug addicted lying family member busts out of rehab and comes home for Christmas. I spoil nothing, the film really begins when Holly, (Julia Roberts) with her three stunning children, one blond and two brown come home from the church Christmas pageant rehearsal to find Ben waiting in front of the house. Not so fast says his sister, Ivy (Kathryn Newton). She’s seen the shit storm that follows her brother, it’s Christmas and she’s not having it. She immediately texts her step-dad, Neal (Courtney B. Vance) to warn him. Holly who adores her first born like she does her other three kids, can’t let her baby go. Ben might as well be a lump of coal as far as Neal and Ivy are concerned. I’m gonna stop here in terms of plot because it doesn’t go where you think it is heading and I’m not telling. I’m just saying that I buy it, especially the end. What I feel comfortable saying includes some notes on what may seem mundane but makes a film compelling and not distracting. The whites are so cold and stark, we feel the cold of December in upstate New York. Newton, the teenage sister is lit to look warm and soft as are the other two kids. Vance looks almost Christlike where Roberts looks appropriately tense and dispirited by being lit with a slight shadow. How lighting can influence our perception of characters never stops stunning me.

The thing about addiction to hard drugs like opioids is that a lot of people start out taking something prescribed to them for legitimate reasons and then their brains become convinced that they can’t function without them. There are universal side effects from opiates that people don’t talk about that I think would be a total deal breaker for oh, I dunno, anyone. Constipation. ED (if you don’t know, look it up) seem like crappy trade offs (sorry). I’m legit allergic to codeine and several narcotics. I’ve lived past 40 so I’ve had a few procedures that have required anesthesia and I’m here to tell you that all narcotics make me anxious, stupid and incapable of keeping anything down. All of them make me uncontrollably scratch my nose, which is just weird. 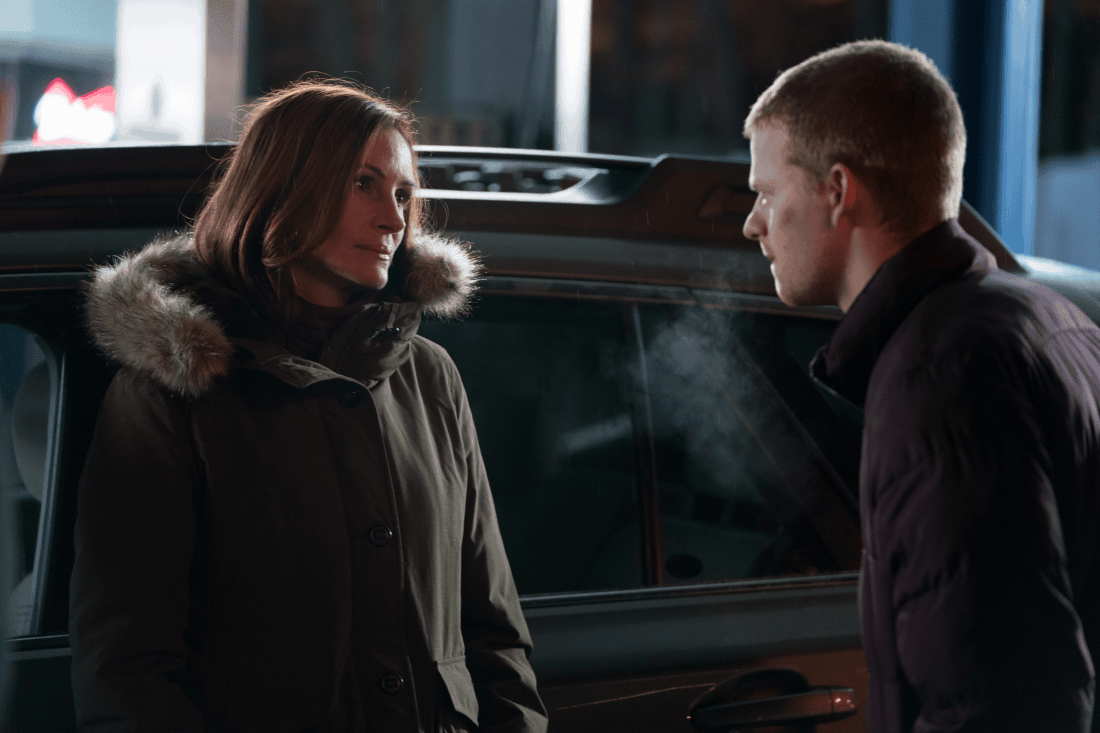 My dad was a drug addicted, bipolar physician who had two strong feelings about women coupled with potentially conflicting expectations: never enough makeup, never thin enough, and; never ambitious enough, never wealthy enough.  My only sibling had his first beer at seven, started smoking pot as an early teen, dropped acid early in high school and scooted straight to heroin after moving to San Francisco in his early twenties. I hadn’t heard from him for two months after our father died when I got a collect call at work from Jeremy Junky. I know it sounds like a cliché that my heart dropped to my stomach and my stomach dropped out from under me, I felt the blood drain from my face, my hands got so cold and yet they were wet. I was crying but I wasn’t making a sound. My coworkers stared at me, but people still felt sorry for me because my dad had just shot himself in the head in his BMW in the garage of my childhood home in Orange County. You gotta admit, my parents have given me a shit-ton to write about (my mother died in a plane crash when I was ten, it’s okay to laugh).

So, here’s the thing, I could give you all the details about how my brother needed money to pay his dealer (which I gave him), how I had him literally kidnapped (twice), how I made a preemptive missing person report to the San Francisco police department after he went back the first time. Evidently, they appreciated having pictures and identifying information on file so when people OD they can more easily notify family. (Probably not necessary now because of the internet.) How I spent the best worst Thanksgiving of my life at County USC Medical Center and came home smelling like crack. Evidently, that was the overwhelming smell that pervaded the ER in the 90s. It made me feel ill, but my brother was able to identify that distinct odor for me.  (How even 25 years later, when I recognize that smell on the subway or on the streets, I am instantly taken back to that Thanksgiving day and the infected track marks on my little brother’s arms. The marks he had made no attempt to hide two months before. The marks I had looked at and had not seen. Refused to see? How I called a friend who was a social worker at the VA for advice (smartest move I ever made). How Ira told me not to go the methadone route. How my cousins helped finance my care of my brother. How I bathed him and watched his feces float out of his body because he didn’t have bowel control at the age of 22. How I pretended not to see. How I slept in the same bed as him because his nightmares were so intense, he was terrified of being alone and even worse, he was afraid of leaving my apartment and finding drugs. How my asshole boyfriend was creeped out by my care of my brother. How I arranged for his friends to literally babysit him, so I could go back to work. How my cousins took him into their beautiful home in the Hollywood Hills for six months where he had no access to transportation, where he could just recuperate and get back up to 140 from 128 (he’s 5’10). How I panicked when he moved back to San Francisco. But I’ll turn around three times and spit and knock on wood and even burn some sage, it’s been 25 years and the kid is more than alright. (Homeowner in San Francisco, partnership in a successful restaurant business and organic grocery store, intelligent and beautiful wife and two amazing kids.) We don’t talk about it much. And you know what? I’d do it all over again. I couldn’t handle any more loss. I was 25 years old. He believes that I did it for him. I didn’t. I did it for me.

Peter Hedges did it for all of us.

Written and Directed by Peter Hedges