When you’re in American Cut, you’re in a smoking section 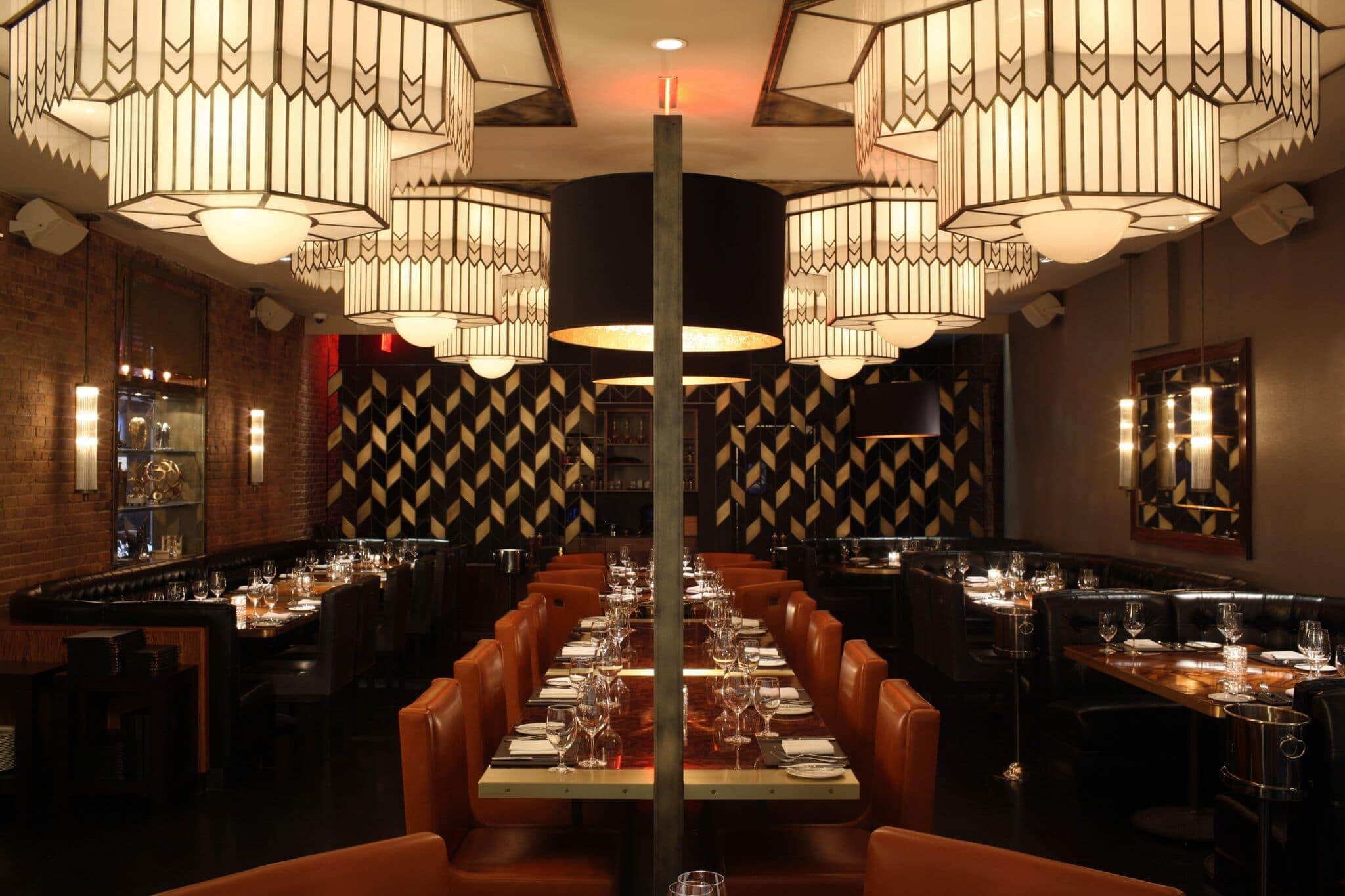 It’s coincidental that I’m at American Cut, sitting at the bar, awaiting a table as I celebrate the pre-release of At Large magazine’s #whothehellareyou issue, because I’ve literally had to announce myself, explain who I am, a minute ago. Who I am, who I was. A minute or maybe longer.

Hardly anything is really coincidental, not really, not anymore, not with the Internet and a cell phone. Not in a place like this (you think), well-oiled and well-mannered, everything in order or pre-ordained, probably before you walk in. Take a step, hold the door for the person behind you, and then yourself.

The bar is lively; the bartenders are lively too, shaking cocktails and igniting, at least one of them, into flames. That’s mine, and it’s being delivered to me on a maple plank. Thank you, I say. That’s impressive, I say. Do you do that to all of them, I say, which is not actually a question. Or at least I wasn’t expecting an answer. I dip my nose closer to the low ball’s rim, savor the smokiness; smokiness that is actual smoke exhaling or excreting or exuding from the aforementioned torch, emotionally and metaphorically, mixing with the bar air, the air-conditioner, the breath of all these well-dressed bodies. Soft baked pretzels.

I’ve just returned from a visit to the host stand, where I’ve told the hostess who I am, why I’m here. Besides waiting, I mean. Bathed in a golden amber hue, I almost feel radiant too. Godly, celestial. The kind of Master of the Universe I loathe. All those suits, and the one I’m wearing tonight. Who the hell are you? I think. Who the hell cares?

The general manager apologizes for the wait on the table I’d reserved a week ago, when I could only imagine what the inside of this steakhouse looks like, something Google Images does well to accommodate. (It’s better in person.) Copper ceilings and brass chandeliers, dimly lit into an Art Deco glimmer. Unless that’s the backlight of my iPhone. And if all the guests are looking down, they’ll stop on the glowing inlaid marble. 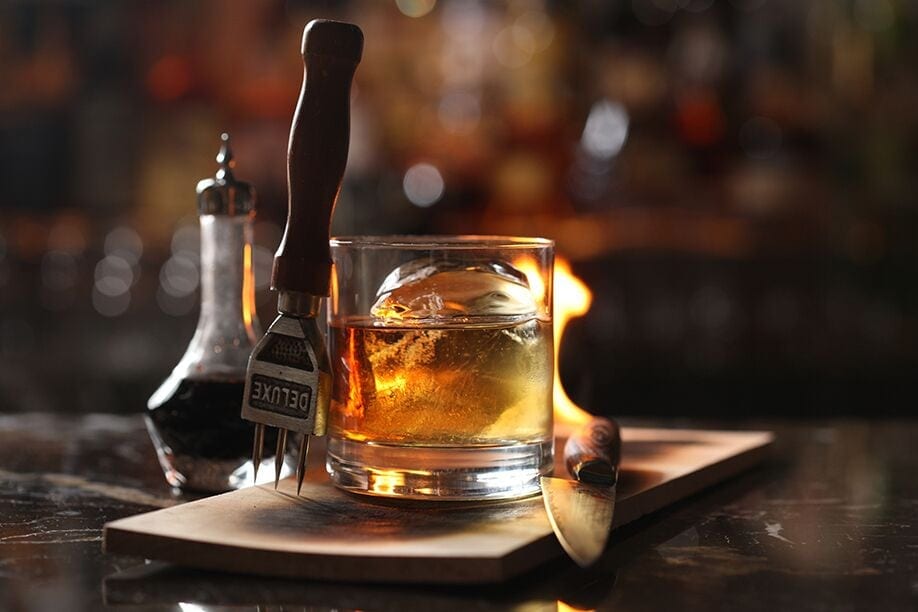 Look up, sit back down on the high stool to the waiting embrace of the Smoked Old Fashioned; just one sip of which is enough to make the waiting more than bearable, but an occasion unto itself. And it is, sort of, irreplaceable. Because every plank that gets lit on fire is a little different, so the taste of each cocktail will vary, too. A little bit. Sometimes it’s a heavier char, sometimes—or at least the last time—it was smoother, younger. Like your own face in the mirror as time passes. After a few drinks. Those are your thoughts and mine. A jolt, a rift, maybe a jump-cut. The human heart. Have you been drinking? Have you been thinking? Everything that is happening will happen in a moment, you murmur. And while you murmur, the black-vested mixologist a few feet away has rolled up his white sleeves and flipped another glass, adding an ice cube the size of a fist and pouring in the mixed liquid: bourbon, bitters, syrup. Bourbon, bitters, syrup. It’s chant-like. It’s angelic. An incantation. Cherubim and seraphim. Those golden amber hues again, receding in the background. That formal announcement. Here I am; I’ve arrived.

So what’s good here? I ask the woman next to me. She answers at the same moment her companion does. Voice track synchronizing with the image track. They both say: “Everything.” And they are mostly right, but I won’t know that for at least another fifteen minutes, maybe longer.

Imagine if Peter Luger’s and Katz’s married, then birthed a beautiful baby. The pastrami-rubbed hanger steak is it, and cooked to an ideal medium, retaining the smokiness of the pastrami spices, the garlic, the onion, the parsley, whatever the hell else they bathed this baby with, if babies are allowed to take baths straight out of the womb. And in between, more meat; thick juicy strips of bacon, steak sauce, black onions. The first bacon I’ve tasted that tastes as good as it smells. The idea of bacon that matches its reality, or vice versa. I forget which. (Our waiter swoops in to deliver another Smoked Old Fashioned.) In general, everything seems smoked here; smoked and smoky: smoking, in that Junior High way of talking about your gym class crush. It’s dimly lit; it’s cloudy, filmy; a film noir alleyway, a scene shot in black and white or soaked in sepia. I could use a light. I don’t smoke. 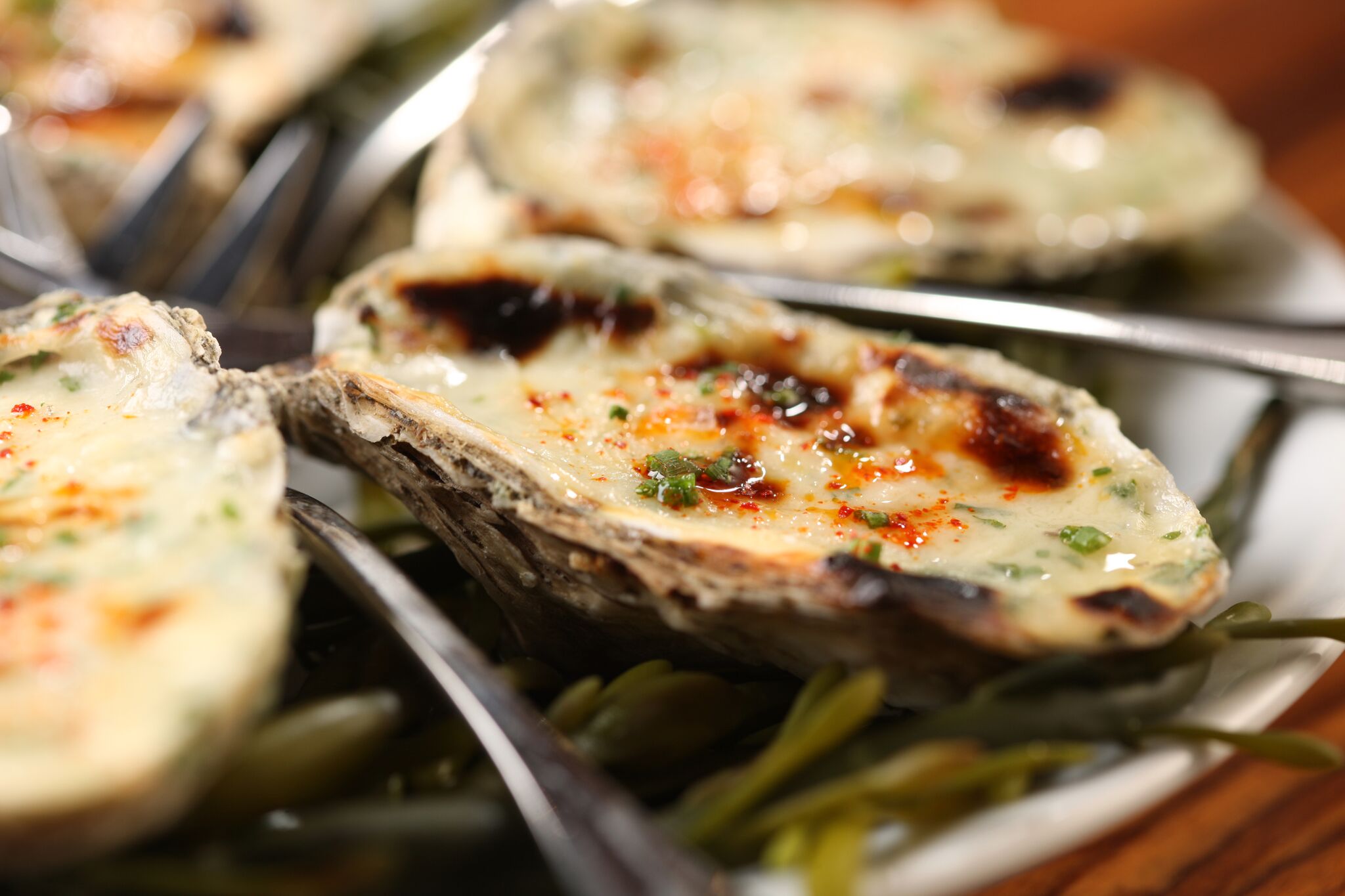 Oysters in the half shell

Sunchoke spinach arrives in a ceramic vat, lathered with fontina, and something inimitable. (I later learn it’s just smoked salt.) Even better is the simple, smoke-less, potato puree. Best might be the biscuits they gift you after you finally get shown to your table: an everything bagel meets sour cream and onion butter. Drunk meets Munchies, and if everyone is waiting as long as I’ve waited, we’re all drunk. We’re always hungry.

Restaurant Week desserts disappoint, which is odd in a place where decadence is the one prerequisite and parameter. Cracker Jack sundae with popcorn ice cream ends up being a scoop of each, in a glass that is half the size of a high ball. The blueberry bread pudding fares better, especially with a spoonful of the accompanying mint basil ice cream. And after the dessert is the dessert after-party: two vials of sweet cream ice cream, made in house. A shot of something sweet, but not too sweet. Balanced by something dark I can’t identify. Probably smoke.

On the inside, Tribeca’s American Cut is a total throwback to a time where Wall Street ruled, and financial analysts were cool, if it ever existed. And through the course of your meal, you might feel like a million bucks even if you don’t spend more than a hundred. In fact, it’s the excellent happy hour—they call it “Prime Time”—that will keep you returning, suit or no suit, on a special occasion or an occasion in which everything is special. (Because it is, isn’t it? You’re here, we’re talking. You might even be looking at me in the eyes.) 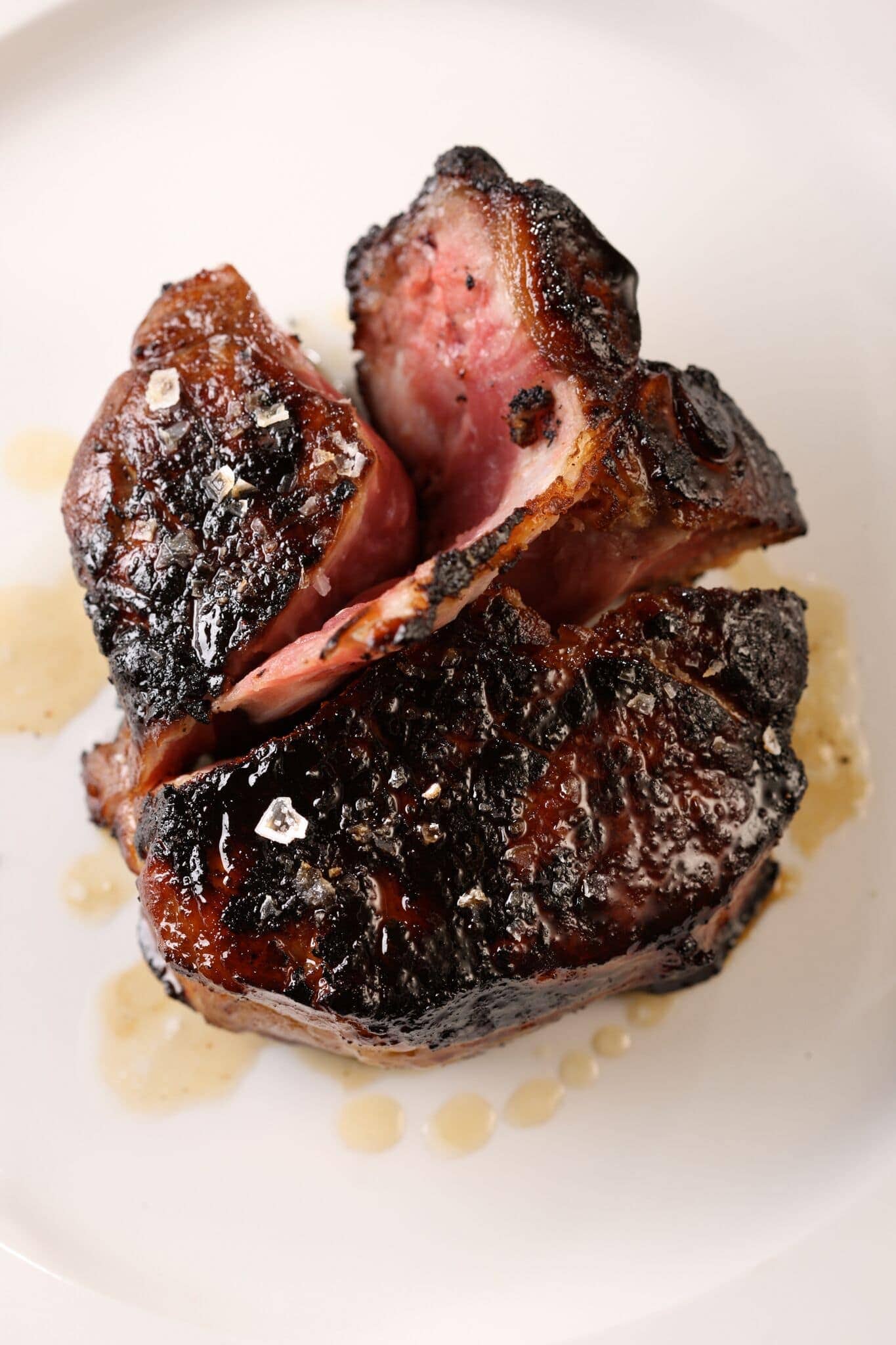 The pro move is a dozen one-dollar oysters and the off-the-menu while-supplies-last burger (fontina and cheddar beer cheese, caramelized onions cooked with bourbon, a pretzel bun prepared by the pastry chef) at the bar. Ask nicely. Show teeth. Check Twitter to see how many the kitchen prepared for this evening. Wash it down with a couple Smoked Old Fashioneds and you might leave asking yourself the same question we posed to readers for this issue, looking at yourself in the reflection of a mirror with a grin as bold as the place itself. Another round, as we prepare your table. It’s on me. Whatever it is you’re drinking. Whatever it is you’re thinking. Who can say no to an invitation like that?