The Detroit-built V-8 engine is as big a chunk of American identity as the Old Glory, the ten-gallon hat, and the jacked pickup with tires as big as Daisy Duke’s inflatables. American-style drag racing squeezes a nation’s worth of sex and violence into this engine’s compactlump, and within its confines, hot steel shafts push oily pistons up tightly bored holes, mad hot with the stroking, exploding every four thrusts. It is powergasm on asphalt for all to witness; the earth-splitting bellow of crazy revving engines, the flaming cannon fire of exhaust stacks, the steely whine of a supercharger, the rippling deformation of tire-skin under the wrenching torque of immeasurable horsepower. 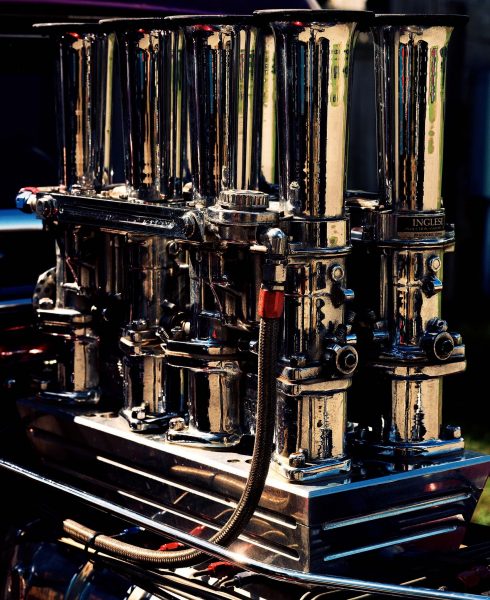 The V-8 engine (above) is ubiquitous in the drag scene (and NASCAR), like the Frenchman’s bread and the Swissman’s cheese … more like the goddamn air, because V-8s are everywhere. With hundreds of millions built since the 1930s, the foundation for outrageous power is as common as mud and weeds, and about as cheap. The “rail” dragster is a pure speed machine, as delicately realized as the finest European Formula One racer, but much, much faster. The chassis weighs nothing; a welded-up lattice framework of lightweight tubing connects a pair of bicycle wheels up front with enormously fat “slicks” at the rear, between which the engine and pilot sit in an uneasy few seconds of cohabitation. The trellis-designed frame is just strong enough to prevent an inconceivably pow- erful V-8 from ripping itself out of its cage and careening in death-freedom as a molten metal pinwheel, bleeding hot oil and flaming ejecta. Superchargers force an explosive nitromethane mix into every cylinder, ignited fifty times per second (x8), running the ragged edge of any metal’s ability to absorb heat without deformation or liquefaction, which occasionally broaches even the stoutest of engine casings. The result is instant chaos, and in the emergency all moving parts—pistons, valves, crankshaft, camchain—discover their own escape routes in an energetic disassembly lasting less than a second. The consequences most urgently affect the driver sitting a mere few feet from the unfolding catastrophe, doing his/her best to stop a disintegrating land missile from cartwheeling toward doom.

IN THE GLORIOUS CIRCUS OF MOTORIZED AMERICAN SPEED COMPETITIONS, THE HIGHLY TUNED ENGINE IS THE HEART OF IT ALL 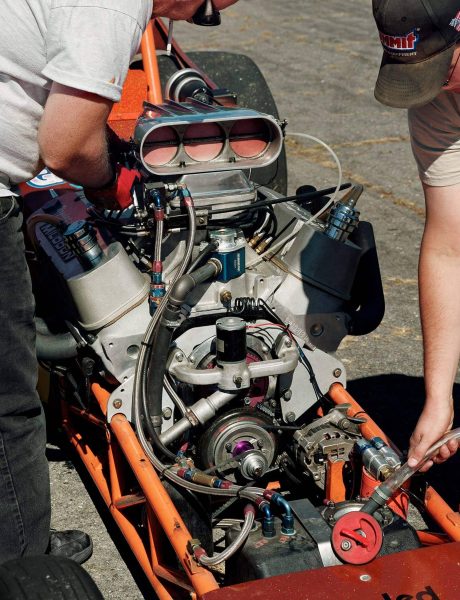 It takes incredibly skilled labor to transform a 140 hp sedan motor into a fire-breathing, nitro-swilling, 1500-plus hp supercharged beast, and from these hands we find the poetry lurking within the vulgarity of the drag strip and the pornography of speed. Drained of reference, Matthew Porter’s photographs might seem like an ironic commentary on American power lust and the fuel-guzzling, make-a-big-noise type of working-class pastime. The V-8 taken out of context hangs like a bomb from a chain, but is more accurately a package of patient obsession, attention to minute detail, and ambition. In the glorious circus of motorized American speed competitions, the highly tuned engine is the heart of it all, but there’s no reward, bar aesthetic, for making the engine beautiful— or chroming valve covers and superchargers and intake stacks, for making the blower scoop that particular shape of badass. Success is measured only by the clock, so more is at stake here than victory, and chrome is the clue; like the oc- casionally disastrous blowups which bedevil them, these unseen greasy hands broach the confines of the functional, spilling molten passion into the realm of art. Let us induct these mechanics into the pantheon of artists, and nominate the drag strip as our performance space; not ironically, but as a place where life explodes, and priapic wheeled missiles hurtle into the invisible womb of time.