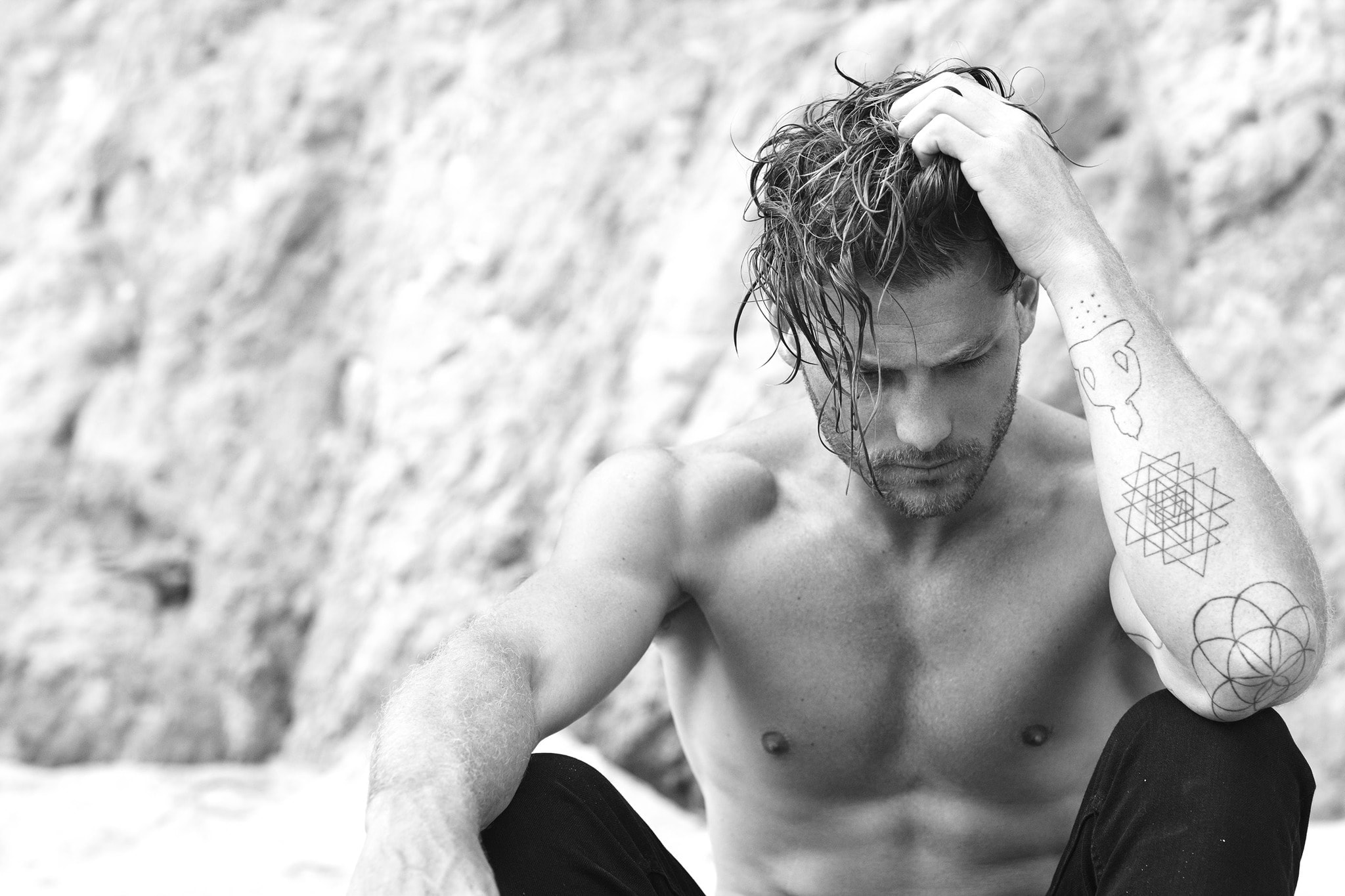 Philippe LeBlond can be seen in everything from Armani suits to Moschino advertisements, but most often, he’s seen in his van. His world travels are famously documented online and on his Instagram account, @philippe_leblond. When he’s not working, he lives on the road, exploring the depths of the desert, the woods or the seaside. It’s no wonder that when he’s photographed he looks at home anywhere, as being on the road — usually alone, and often for weeks on end — will force you to be comfortable in your own skin.

For LeBlond, the wild life started early. His father set up fires in their backyard and taught young Philippe how to cook with them, and how to live outside as you would at home. “He showed me how to sleep under the stars,” LeBlond says.

While LeBlond has been working as a professional model for many years between New York and L.A., traveling maintained a key role in his spiritual development. “I kept going back to Europe. Every time I went, I felt more at home. There was one person who told me, ’you have to learn if you’re a traveler: your home is where you put your hat

at night.’ When I started feeling really good wherever I was, it changed the way I see life.” By the time he was 30, he was living with his girlfriend in a Beverly Hills mansion. While many of us may dream of such a life, LeBlond realized he wasn’t happy, and that no matter how much they had, he couldn’t make her happy. Something wasn’t right. “After we broke up, the only thing I had left was my van,” he says. Clarity washed over him — he needed to hit the road.

Driving from L.A. to Vancouver, LeBlond visited every National Park along the route. During his month-long excursion, he became addicted to the freedom. “My van is my bedroom, and the world is my living room,” he says. Now based in L.A. for work, during down stretches he takes road trips.

“I need to be around a city where I can work. L.A. is the city I choose. I can surf. I can be in Mexico in three hours. I can easily go to San Francisco. It’s a really good geocentric area for nature.” Heading up to Mammoth mountain for snowboarding, one of his biggest passions, is his favorite weekend trip. “The drive is incredible. You go through the Sierra. There are mountains. There are hot springs everywhere. It’s stunning.”

At Large hitched a ride with LeBlond in Los Angeles and asked for his directions. 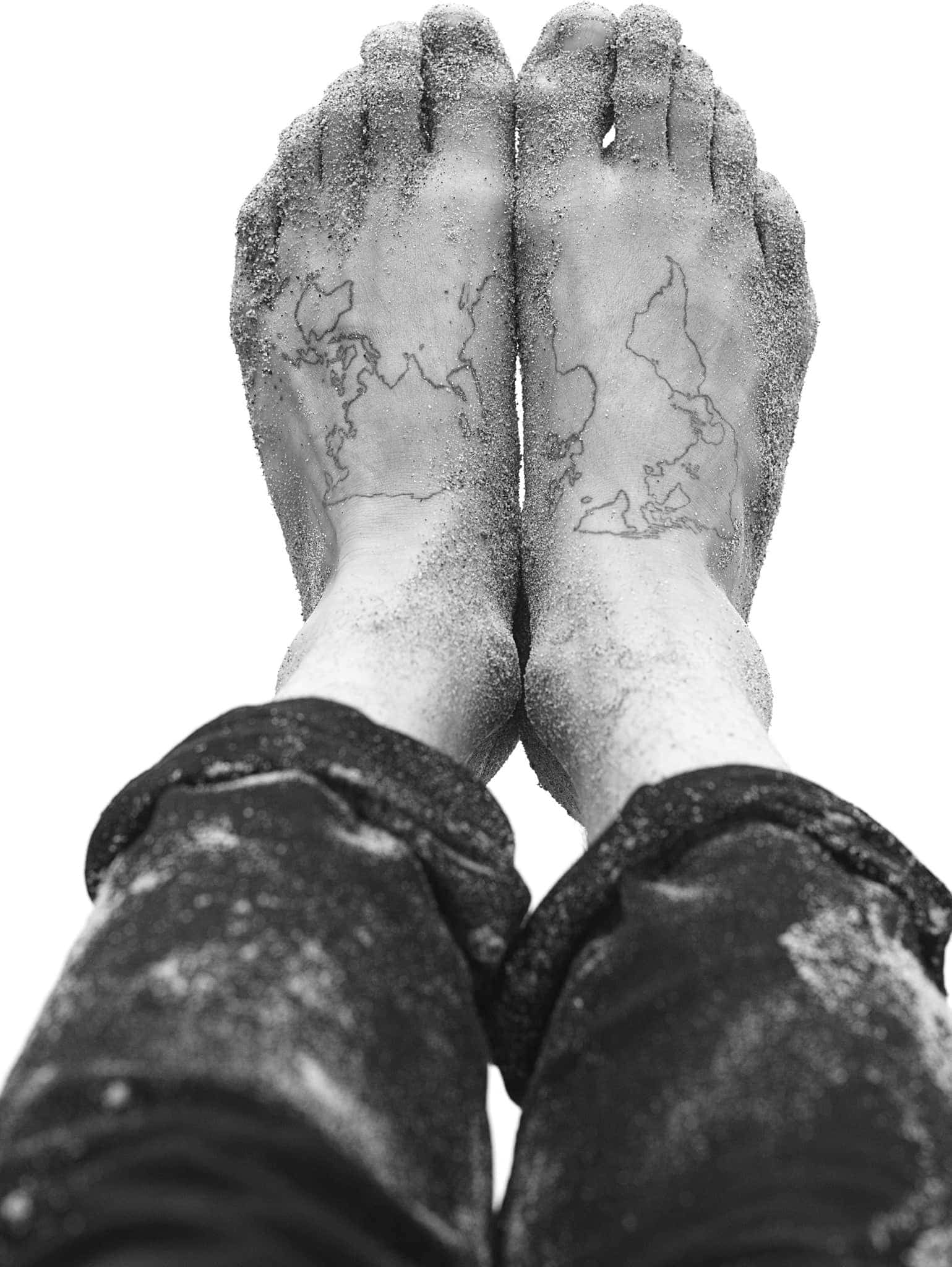 DA In almost every picture on your Instagram, you’re surrounded by water. Why is that?

PB Water is the source of life. You really need water in your life. Waterfalls are my favorite. Every time I do a big road trip, I try to not bathe in showers. I prefer to wash myself in a river, or a lake.

DA You have a world map tattooed across your feet, which you also frequently photograph in front of different backdrops; cliffs, canyons and oceans.

PB I did that tattoo after twelve years of traveling. It reminds me that the world will always be at your feet.

DA What music do you listen to, and are there any specific albums that keep you company?

PB The last few trips I just listened to the radio. It plays music from wherever I am. In Canada, they play French music. If I go to the Sierras they play country, which I started to like because it matches the landscape.

DA Do you ever get scared when you’re alone in the woods?

PB One time I was in Oregon, far from any sign of life. During the day, only one car would drive by every forty minutes. I was next to a river, camping at night, and I heard something coming. It was quite big. Branches were cracking. It sounded really heavy. And it was pitch black in the middle of the forest. I didn’t know what it was. When you’re by yourself it’s different. You have to think about life differently. Even when I’m crossing a river, and my foot gets caught, I think I might drown. You’re in survival mode. Any noise, you hear it better. All of your senses are boosted when you’re traveling alone. That’s the part I like. I feel more alive.

DA Oftentimes, we see models on Page Six, getting into trouble and living briefly within a wild social scene. Your life is a different kind of wild. I wonder, in an industry that often relies on the superficial, how have you found enlightenment, and how has it helped you in return?

PB You know, we are spiritual beings having a human experience, not human beings having a spiritual experience. With modeling, I know they’re selling a look, so I think it’s really important to build the inside as strong and as beautiful as the outside.

DA How has traveling helped you maintain your spirit, which seems so pivotal to both your life and your work?

PB Traveling is the only thing money can buy that makes you richer. I believe that’s 200% true. Traveling teaches who you are, about life, everything.