AT HOME AND AT LARGE

If you see Nick Wooster on the street and tell him he looks great and that you love what he does (which happens a handful of times daily to the most recognizable man in menswear), he will graciously say thank you and pose—arms crossed—for the seflie you’ll invariably take with him. If you know him well, which I am pleased to, he will more likely answer, “Really? I have no idea what I was thinking this morning,” or something to that effect. Why did he wear that thing he is now jokingly second-guessing? Because he liked the idea of it. Liking something in theory more than in practice is a feeling most people can relate to, but when it comes to fashion few are still willing to walk out of the house so conflicted. Nick Wooster does. And it’s made him famous. 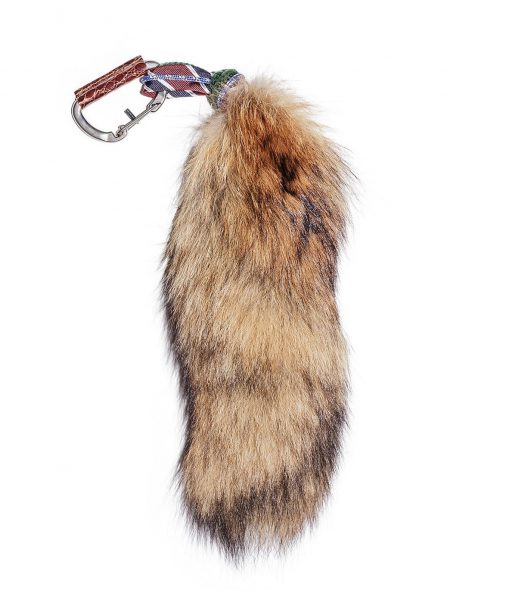 “This was a gift from the guys at Vanities, Paris. It’s a fur tail that I put on bags.”

“I think ninety percent of the time I don’t look good in things, in the sense that it will make me look taller, thinner, or richer . . . Sometimes that could be upsetting, like, ‘Is he wearing a skirt?’ But most times it’s just funny. I almost always laugh when I get dressed.” His approachable good looks, gray pompadour, and tattoo sleeves offer a counterbalance to the clothing he wears, which can swing from conservative, traditional fabrics in slightly altered shapes to parachute-material kilts. It’s made him the quintessential street-style star from the beginning of the phenomenon, which I’ll peg as the beginning of 2008. That’s when I first met Wooster, on the men’s show circuit in Europe. In those days he was the recently appointed fashion director of the Neiman Marcus/Bergdorf Goodman group. At that point, men were paying attention to a new kind of suit, one that not only made a guy look like a serious person, but also a cool one. Mad Men had premiered the year before, and things were happening around tailored clothing, like Thom Browne introducing a cropped and severe silhouette, and a greater use of color and pattern in the Italian “sprezzatura” way of dressing, which was starting to supplant a more casual look.

As I’ve said before, I’m this old, short fucker who is surprised that anybody notices

Wooster, rooted deeply in product knowledge and well versed in the market, pulled off both looks. But he embodied something else, too. He is an individualist—taking from many to create one complete style—while still being relatable. Wooster wore suits because he had to for work, but he made them look “badass” (an oft-used description) because that’s what he is. Thanks to the work of photographers Tommy Ton, Scott Schuman, and then a legion of street-style lensmen, Wooster’s looks caught on in social media and they have not slowed down since. “I’ve always pushed the envelope of a dress code; I’ve always tried to get away with something, because that’s in my nature. It’s sort of like being the class clown. I always say that I would prefer to be on the sidelines, but my actions are opposite; dressing a certain way puts a spotlight on you.”Wooster’s notoriety skyrocketed when ties were cut between him and the Neiman Marcus group. Rid of the requisite suit, however stylish, Wooster wore what he wanted—what he liked the idea of—and his reputation grew bigger still. All this bewildered the man at the time, and it still does. “No one is more surprised by all of this than I am because, as I’ve said before, I’m this old, short fucker who is surprised that anybody notices.” Planned or not, desired or not, the attention coalesced around him. “On the one hand, I think that people see me as this person who gets his picture taken—and that’s true, I do get my picture taken—but that has nothing to do with how I got here. I did it the hard way: standing on the floor of a retail store, becoming a buyer, learning how to make clothes and working in design, then fusing all those elements when I went back to retail, and then overseeing design for a huge company.” 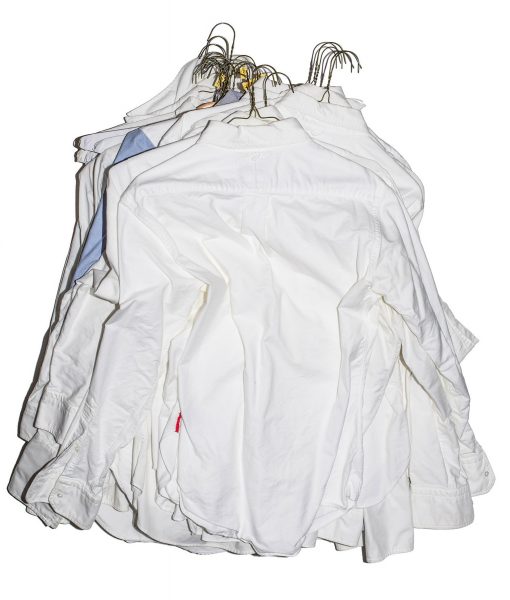 “White shirts. That is the foundation of my wardrobe. I could not survive without white shirts.” 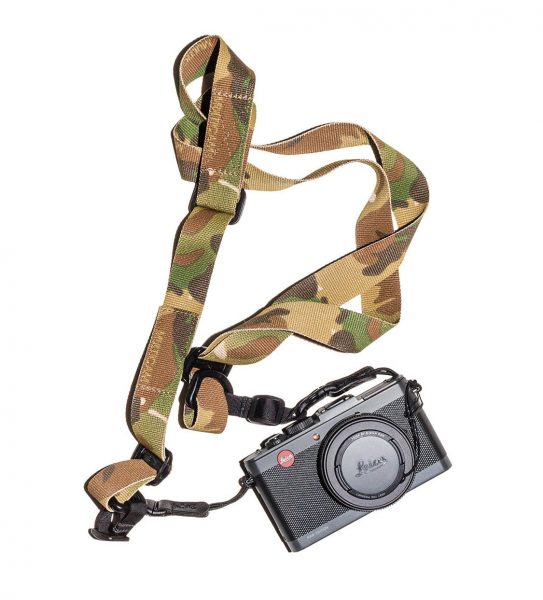 “The camera was a gift from the people at G-Star. It’s got a nice strap. Camo is a solid.”

It’s easy to forget how much experience matters. Wooster made a name for himself with his work ethic and point of view. Cameras or not, he is relevant because of what he’s worked through, been part of, or started himself. Now he finds himself in the enviable—if taxing—position of being one of the most sought-after brains in menswear. Some only want his persona, others just want his opinion, but it’s a package deal. And it’s something few others are currently capable of doing. I could say Wooster is at the vanguard of fashion professionals, but he sees it the other way around. “I am sure this will change in the next generation of street style, and the next generation of fashion. Guys will probably have more leeway than they do today. I’m from the old school; I feel like I represent the tail end of something.” 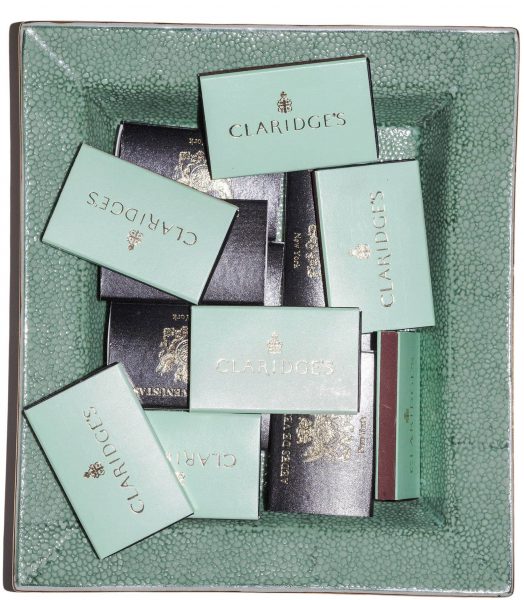 “Matches to light candles for all the smoking I do in my apartment.” 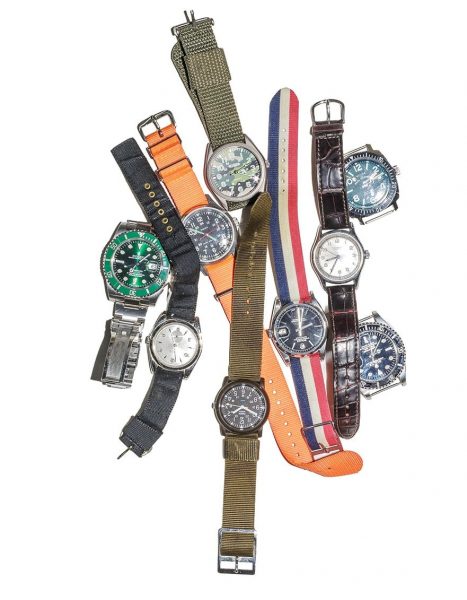 “These are just some watches I had in a bag. The Universal Genève watch was brought back by my great uncle from World War II. He took it off a dead Nazi.”

Clothing is one of our basic necessities, which, along with food and shelter, we cannot live without. For generations, mankind has used this necessity to conjure more social status, national identity, religious affiliation, gang affiliation, music taste, or political leaning. Most of us don’t think about it often, but Wooster envelopes himself in it, and recognizes that clothing, objects, stickers, even cigarette butts are talismans that say much about the one who carries them. “I’ve always said that I am super shallow and super consumer-oriented, which is not cool to a lot of people. I respect that and understand why they feel that way. Even I get grossed out sometimes by my consumption,” says Wooster in his typical self-deprecating manner. “But I’ve worked since I was twelve—mowing lawns—to buy the things I want. I do believe that your stuff is a reflection of what’s going on in your head. It might be obsessive, it might be compulsive, it might be super anal and organized, or it might be super minimal. I think it’s fascinating. I love going to people’s houses because it’s an insight. It’s not because of what they have, but because of what they do with it.”

Take from it what you will. 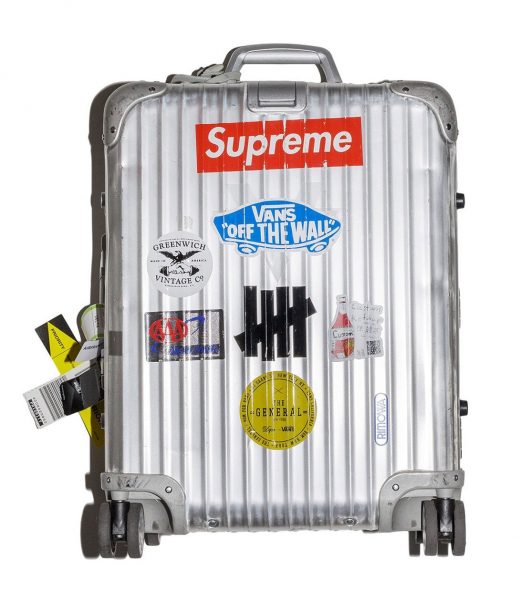 “Rimowa luggage is the backbone of my life. I love stickers, too.”

All photos excerpted from Incomplete Inventory, a forthcoming imprint from JP Williams at Wms & Co., with photography by Grant Peterson.