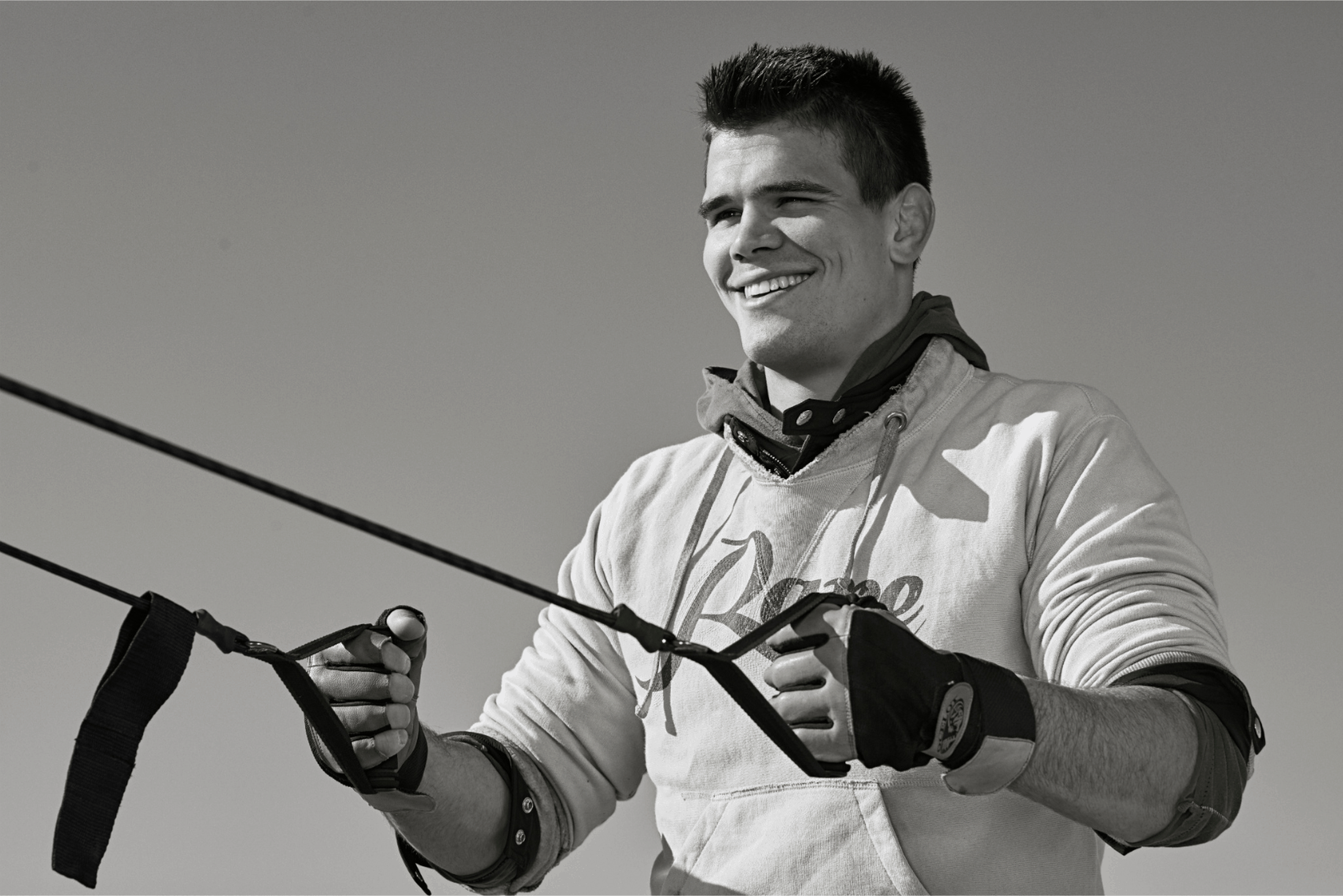 Combat has never needed a promoter. After all, competition is the prime mover that hand wrote our DNA, and a good scrap is our original sport. Which goes a long way in explaining mixed martial arts events’ explosive growth. But now that the world’s premier MMA organization, the Ultimate Fighting Championship, has more athletes under contract than the NBA, being the fighter fans flock to see requires a self-promotional gift of gab along with highlight reel finishes. Enter Mickey Gall. Brandishing a mind for marketing and lock-tight Jiu Jitsu submissions, the 26-year-old is part millennial Don King part Snap-on® vice grips. Mickey capitalized on his debut professional win—strangling his opponent in the first round—by calling out one of the biggest names in sports entertainment; a pro wrestler with the nom de guerre CM Punk, and whom the UFC’s president, Dana White, signed for the expressed purpose of bolstering Pay-Per-View buys with WWE fanboy eyes. Mickey inked the fight contract, then brutally pounded Punk from the back-mount position before sinking in a choke for another first-round dinger. Squeezing necks and seizing moments has been Mickey’s MO ever since. Sure, winning fights for a living requires gumption. But calling out contenders while doing it takes gall. At Large caught up with the Jersey-born, bell-ringing, BJJ brown belt on LA’s Sunset strip to talk fight strategy, hard soda, and 80’s pop music. 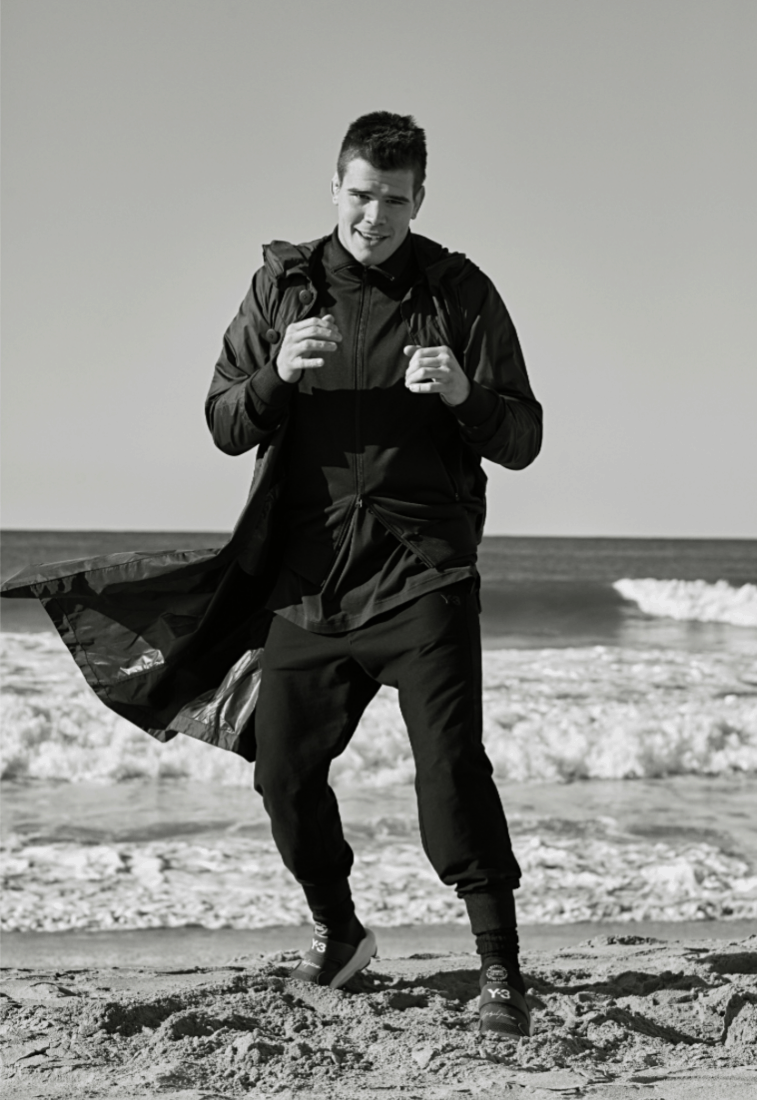 Erik Rasmussen You started boxing at 13 years old and training Brazilian Jiu Jitsu at 16. What drew you to mano-a-mano competition, as opposed to team sports?Micky Gall I played all the sports: football, baseball, basketball. I was captain on my football team in high school. But MMA is so pure. It cuts away the bullshit of other sports. And I like the violence.

ER You were an undefeated amateur fighter. What’s it like coming up through the regional MMA ranks?
MG Getting a fight is hard. Keeping one can be harder. Opponents get hurt or something comes up. One of the worst days of my life, I was getting ready for an amateur fight. I had 100 friends and family in the crowd. I’m putting on my shin guards, about to fight, and the commission comes over. “Fight’s off.” Blue balls to the Nthdegree! It was the last time I remember crying. I was devastated because I went through all the training, all the butterflies, and then they snatched it away.

ER Your first professional fight was in front of a hot crowd and an MMA kingmaker, UFC president Dana White, who was filming his YouTube seriesLooking for a Fight. When did you come up with a plan to make him remember you?
MG I got a call from the promoter, Frankie Perez, and he’s like, “Hey, I got news.” I’d already had an opponent cancel so I’m like, frick, there goes another guy out. And Frankie says, “Dana White’s gonna be at the fight.” I kid you not, within five seconds I’m like, “I’m gonna call out CM Punk.”

ER But you had to win your debut pro fight, first. Were you more nervous to perform in front of Dana or about the fight itself?
MG I don’t know. I just knew I had a plan.

ER CM Punk was a superstar in the WWE. Millions of fans. Everyone expected that Dana, in order to cultivate his audience, would throw Punk a goose for his first real fight. Did you to feel that pressure to demonstrate what happens when a mixed martial artist fights a guy who didn’t make or break his bones coming up in the MMA world.
MG I’ll tell you this, CM Punk was the fight I was most nervous about because people thought he had less talent than other guys I’ve fought, like Sage Northcutt, and I knew if I let that dude do one thing to me, like if I let him land one punch, then I wasn’t gonna be taken seriously. I needed to be perfect. Shut him out. I wanted to represent MMA. So I was nervous for that one. It was obvious that I’d said the right thing to get myself into that spot. But if they thought I was the goose, they picked the wrong one, for sure.

ER But look, anybody can go in there and knock out anybody.
MG The human body, you hit them in the right spot, goes to sleep.

ER I could shut my eyes and throw a punch and knock out Connor McGregor.
MG Your mom could too. You know what I mean?

ER 100%. So that got people watching. “What if Mickey gets caught?”
MG I look like an asshole is what happens.

ER So again, the nerves. How do you deal with those sorts of nerves?
MG I try to stay present, stay in the moment. Why am I nervous? The fight’s not yet. So, what am I doing right now? I’m pacing. I’m walking around. I feel the warm-up mat under my feet. And then I start walking out to the cage, and I’m kind of like, alright now we’re walking to the fight. And you feel the excitement. Then you’re in there. And now you let those butterflies fly you. I’m here now. Let the training take over. 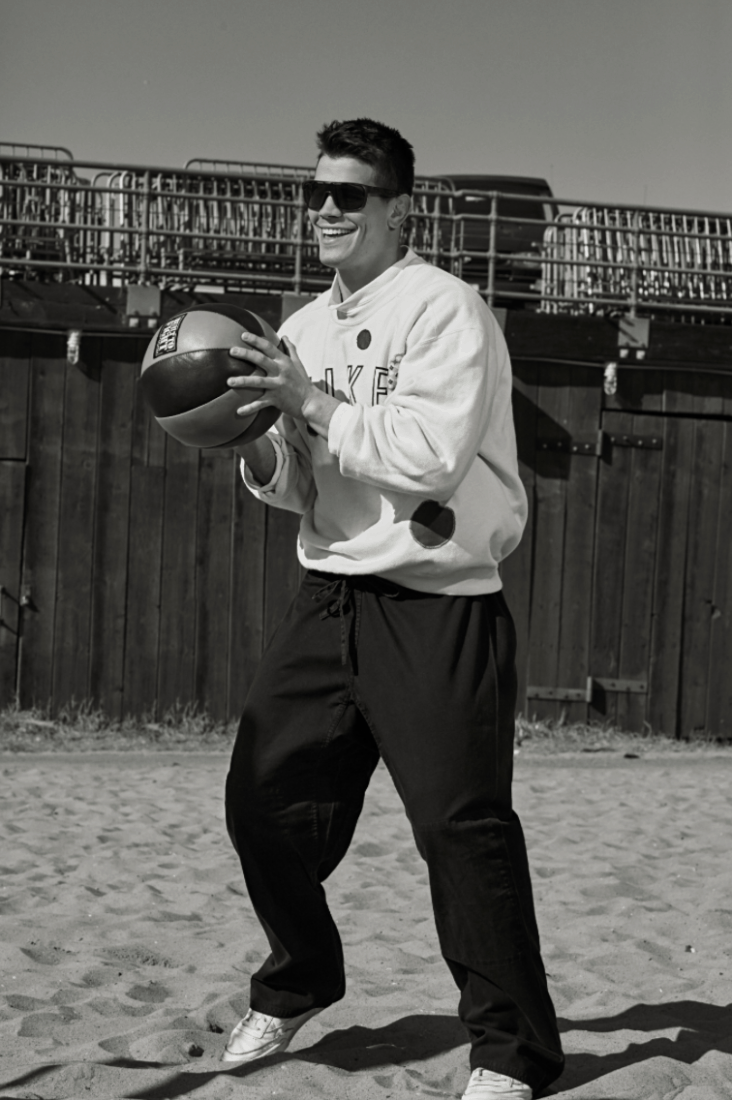 ER In your UFC premiere, you fought a superstar in CM Punk …
MG No, in my UFC premier I fought Mike Jackson. It was Super Bowl weekend. I dropped him in 35 seconds and then I choked him out. Fight was over in 45 seconds. And then I fought CM Punk. And then when I beat CM Punk, when I knew all the eyes were on me, I called out Sage Northcutt.

ER Who, by the way, was a fellow Looking For A Fightfinalist, and who a lot of people thought Dana White was grooming to be UFC’s next big thing. What were your feelings going into that fight?
MG I was fighting a more talented guy. He was in Karate Magazinewhen he was nine years old. He was a champion karate kid. But I knew I could crack him, put him down and submit him.

ER You said Sage was so sweet it was impossible to be the nice guy in the fight, and that you actually enjoyed playing the bad guy. How important is it to build drama around the fight? And does it motivate you or is it a distraction?
MG It totally builds the fight and makes it more exciting. It evokes emotion. And since we’re going to fight regardless, let’s do something about it. We’re gonna hug after the fight anyway. Fighters are practically in their underwear out there, one on one: you have to be an athlete andan entertainer. I think that’s a big part of it. You entertain a little bit, talk a little shit, have some fun with it.

ER You got At Large’s attention. You’ve had an amazing start as a mixed martial artist, you suffered a judge’s decision loss to a tough opponent. How do you bounce back from that?
MG You know, that one burned. I had an off night. It wasn’t me. It wasn’t my best. The thing is, in MMA you’ve got to have it, that 15 minutes, when the fight comes. There’s no, “Give me an hour, I don’t feel great. I gotta go poop.” I didn’t have it that night. I took my first loss, but it made me hungrier. I’m so young in my career still. I’ve had five professional fights. Most of my opponent had 13, 14, 15. I’m gonna rack up experience. And I learn fast.

ER What does the next year look like for young Mickey Gall?
MG If I fight twice; two victories. I got the taste of losing and I never want to taste it again. So I’m training my ass off. I’m gonna have some fun, talk that trash and get some wins. 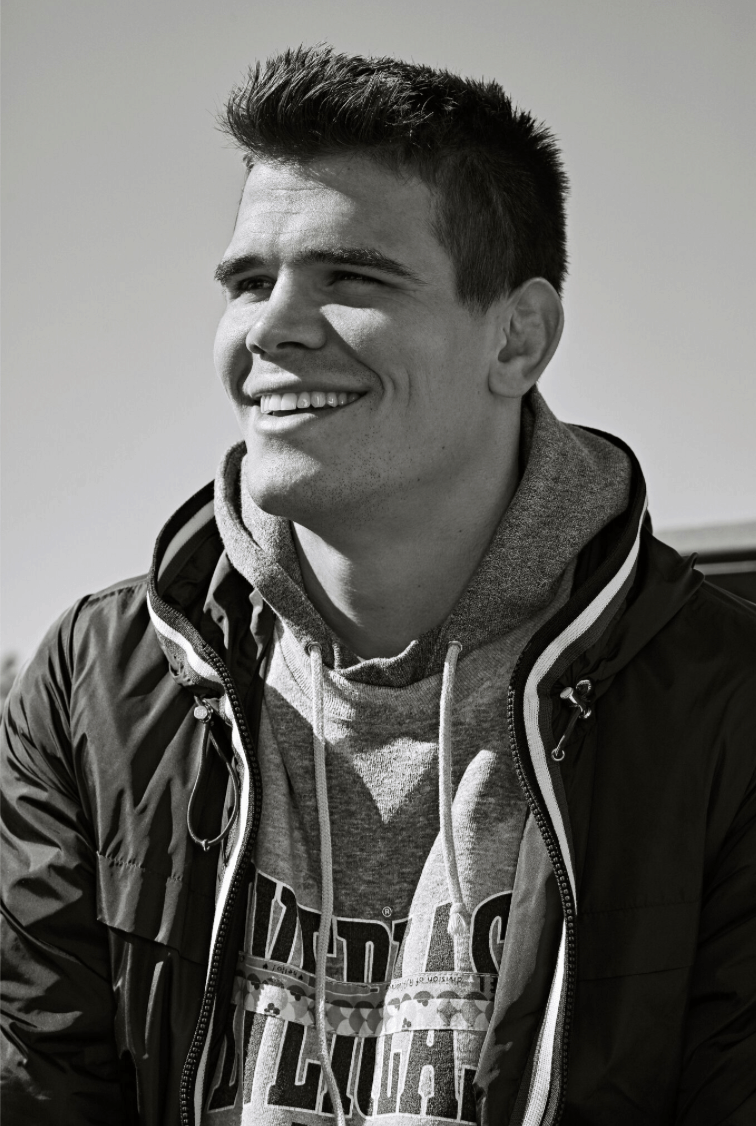 ER Where do you live and why?
MG I live in Watchung, New Jersey. My family’s there. I’ve got my gym there, too. Gracie Jiu Jitsu, where I’ve trained since I was 16.

ER If you weren’t a fighter, what would you be?
MG I have no idea. Thank God for fighting.

ER Who was your idol growing up?
MG My dad. He’s a big tough guy. Tried out for the Giants. He’s a chiropractor in Green Brook, NJ. Awesome dude.

ER Is there anything you’re afraid you won’t do before you die?
MG No. Anything I want to do, I plan on doing it.

ER What’s your most important asset?
MG I’m a strategic thinker. I grew up under my coach David Adid’s philosophy. Rikkson Gracie called him The Brain. And I’ve learned a lot from him.

ER What was the last drink you had? And I mean, not the water.
MG I’ll tell you exactly what it was: Not Your Father’s Root Beer, and Henry’s Hard Soda. I’m usually very healthy, so if I’m going to drink, I’ll quench my sweet tooth at the same time. It tastes like I’m drinking orange soda and root beer. It’s delicious.

ER If you had superpower, what would it be?
MG I’d fly. I know that’s a pretty typical one, but can you imagine being able to fly? In this LA traffic, dude. I’d be flying nonstop, everyday. I’d use it all the time.

ER What’s your most prized possession?
MG My grandfather’s ring, which my grandmother gave me. That would make me the most pissed off at myself if I lost.

ER Something you’ll never do again.
MG I’d never tattle tale. I did it as a little kid but I don’t see any reason for people to tell on people.

ER You are definitely from New Jersey. What’s your go to move?
MG Doing the twist. Nah, I’m kidding.

ER Do you have a dance move?
MG I’ve got a couple. I get a Henry’s Hard Soda and a Not Your Father’s Root Beer in me… I don’t know. My go-to is a stiff one-two and a choke. I know if I could like, crack someone, they’re like a babe in the woods, hearing tweety birds. I take their back, quick choke, end the fight.

ER What advice do you give a young fighter? Younger than you, of course.
MG Train your ass off. That’s something I’m proud that I did. Put in mad hours. If you love it, it won’t be that hard. 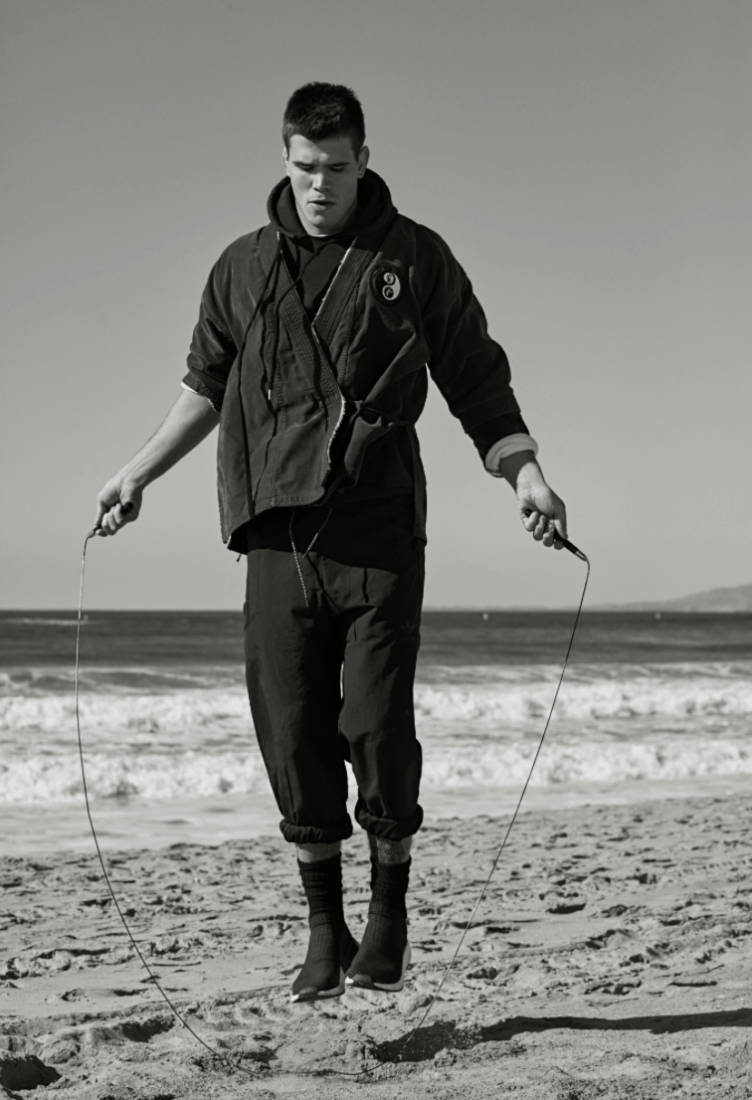 ER Any words to live by?
MG Being present is big. I have this little bracelet that says, “Breathe.” I try to remember to take nice deep breaths and be in the moment. One thing my dad always said was live for today because tomorrow isn’t promised.