If you happen to look up the rules dictating heraldry design, of which there are many, you’ll discover that the terms Dexter and Sinister refer respectively to the right and left segments dividing a shield in a coat of arms. Amongst some of the more archaic regulations, the right side of a coat of arms (Dexter, if you have been paying attention) apparently holds a greater place of honor than its larboard counterpart. Also, and this will be of interest to Nabokov enthusiasts, when a solid band cuts across a coat of arms from top-left to bottom-right, it’s referred to as a bend sinister; a marker of bastard pedigree. Armorial novelties aside, heraldry is a centuries-old tradition of graphic design relying on a complex network of associations between images and social hierarchy, an indicator of hereditary power and might distilled and embodied within the iconographic and typological. 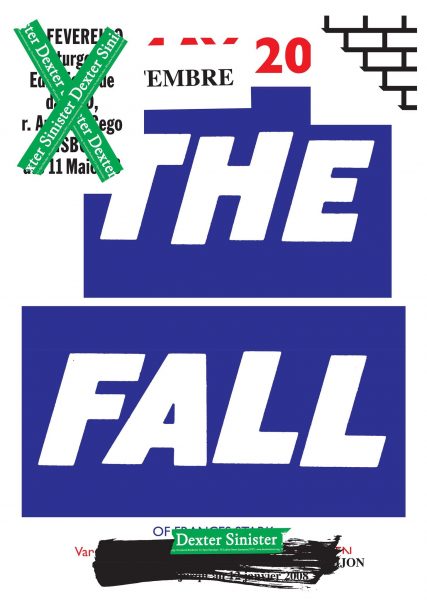 DEXTER SINISTER The Fall, 2008
Silkscreen print (edition of 2)
Courtesy of the artist and available from PICTURE ROOM/MCNALLY JACKSON

In 2011, joined by Angie Keefer, Reinfurt and Bailey founded The Serving Library, a non-profit with the self-described mission of “publishing, archiving, and related activities rooted in the fields of design and art,” founded in direct response to the “inflexibility of existing publishing channels.” One element to the Library is a biannual journal, Bulletins of The Serving Library – a successive iteration of Dexter Sinister’s earlier publication, Dot Dot Dot – with each issue loosely arranged around a central topic (“Numbers” and “Education,” among them). For its third issue, specially commissioned by MoMA in 2012, the collaborative focused attention upon (or simply “focused on”)the theme of “Typography,” with contributors including heavyweight French intellectual Bruno Latour and Internet chronicler, Andrew Blum.

Of course, Dexter Sinister is not the first artistic collaborative to utilize publishing to extend their artistic practice. Famously, the Surrealists, led by Georges Bataille, published the groundbreaking magazine, Documents (1929-1930), while Alfred Stieglitz oversaw the avant-garde art and literary magazine, 291 (1915-1916). However, as Saul Anton observed in an essay discussing the groups 2008 Whitney Biennial piece, “DBulletins of The Serving Library to be the art itself. In the end, magazines, it would seem, can be works of art, too.