There have always been people who sought to stand out from the crowd, or away from the crowd. Some want to look different. Others want to be different. A few are different. Dressing differently is an obvious way of achieving this aim. So is customizing your car or motorcycle. This is nothing new. The warriors of ancient times painted themselves and their chariots before going to war. Some painted their horses, too. Most good collections of medieval or Renaissance armor contain examples of beautifully made and finished horse armor that cost their knightly or mercenary owners a lot of gold. Some of the outlaws and bandits of the time spent just as much on looking sharp and different. In more recent times, the motorcycle has replaced the horse, but wandering past the lines of heavily reworked bobber and chopper motorcycles at any gathering of outlaw bikers or custom bike rally reminds us that there is little new under the sun. 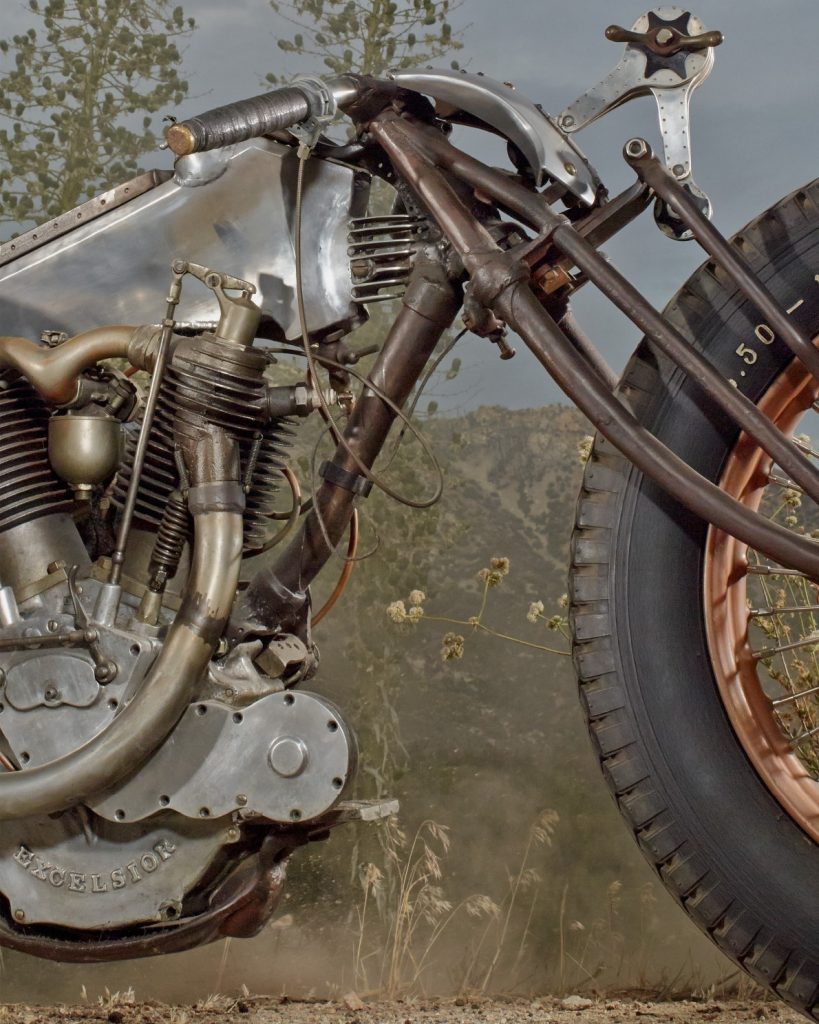 When you ride a bobber or a chopper through town, someone will mention Easy Rider when you are stopped in traffic or at a red light. Easy Rider may have represented the apogee of bikesploitation movies back in 1969 but it is not really a biker flick, as such. Written by Fonda and Hopper, the heavily allegorical movie was not as dark as some of the biker-themed movies in which they and Nicholson had previously appeared. It was however much darker than László Benedek’s seminal biker flick The Wild One, released in 1954 and inspired by the so-called “Hollister Riot” of 1947. That said, the script contains occasional gems. As angry townsfolk in cardboard suits and buzz cuts beat Brando, he sneers: “My old man could hit harder than that!”—a rare allusion to tenement slum reality. But Lee Marvin’s character Chico was a far more accurate representation of the outlaw bike gangster of the era than Brando’s distinctly camp Johnny on his unmodified and excessively clean Triumph Thunderbird. Brando looked a bit more convincing posing on a bobbed Matchless for a couple of publicity stills, but Marvin stole the show. For a start, he was himself a hardened war veteran, like many contemporary outlaw bikers.

The majority of members of the early Californian motorcycle gangs of the 1940s was traumatized and alienated war veterans. As always, the West Coast was a magnet for anyone running after a dream or running away from a nightmare. However, as Woody Guthrie’s 1937 ballad “Do-Re-Mi” put it: California is a Garden of Eden/A paradise for you and for me/But believe it or not/You won’t think it’s so hot/If you ain’t got the Do-Re-Mi. Short of money and work, they gravitated to low-rent places like San Bernardino and Oakland where they had no trouble fitting in with the local misfits. Congregating in flyblown bars and roadhouses with rickety jukeboxes and lived-in waitresses, chugging cheap booze and Benzedrine, their motorcycles parked outside in the buzzing heat, it wasn’t long before these veterans began forming gangs with self-descriptive names like Market Street Commandos, Pissed-Off Bastards of Bloomington, Boozefighters, and Oakland Negroes MC. Like any ghetto gang culture, the emergent outlaw biker culture offered them a respite from the tedium of their directionless existence, a chance to belong someplace on their own terms, someplace where they made the rules, where they could walk tall for a change. Ripping it up on cycles was their thing, gunning their motors, sweeping out of their reservations en masse on their iron horses like latterday marauding Indians, hell-bent on showing Joe Straight what was what. 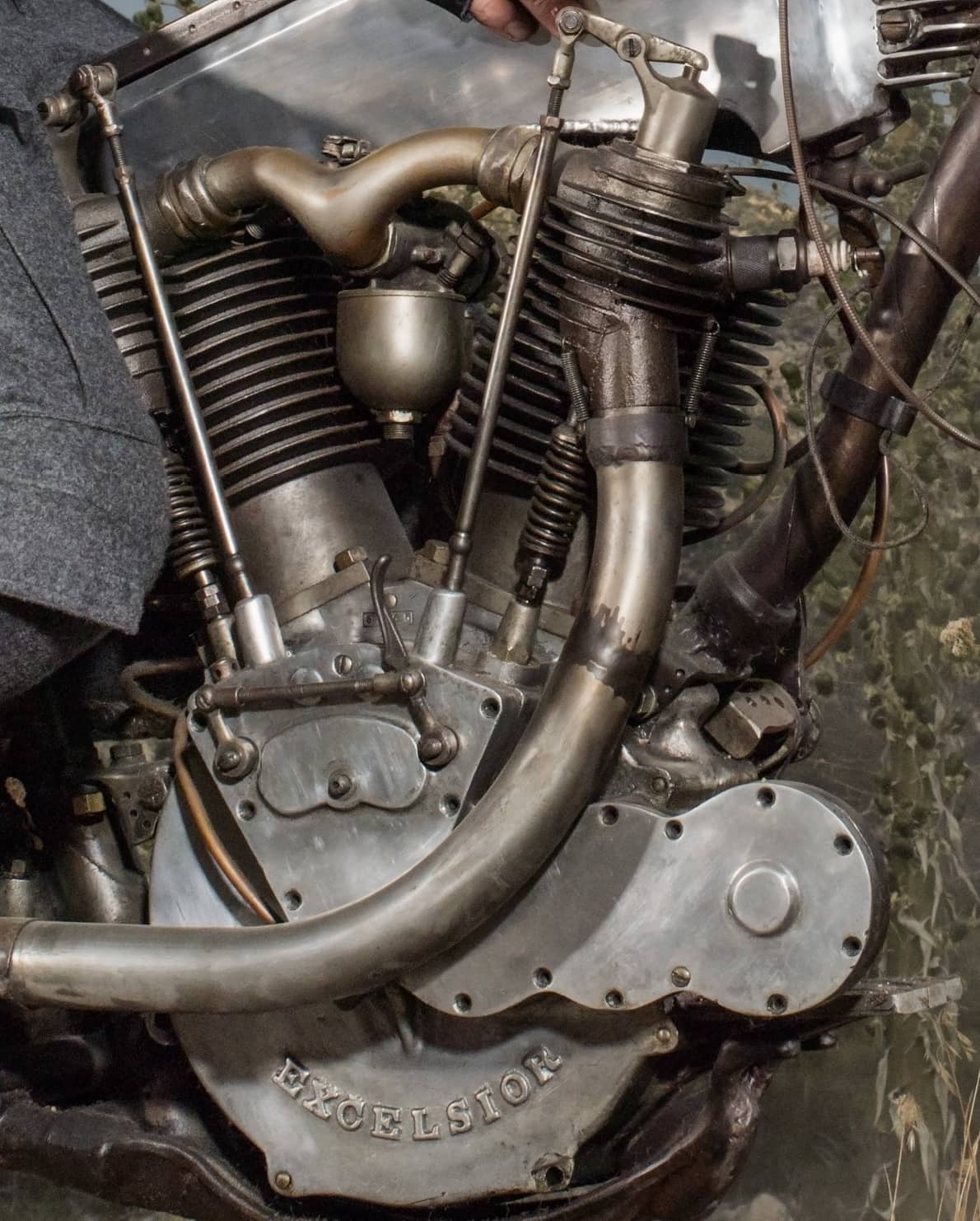 Many of them inevitably drifted into crime but not every hard-looking young man, or woman, on a customized Harley-Davidson or Triumph in the 1940s, 1950s, or 1960s was necessarily a criminal despite the media and cinema-fueled paranoia of Straight America. The “Hollister Riot” was a myth, a media fabrication. When thousands of motorcyclists rumbled into the small Californian town on Independence Day 1947, a handful of bikers were jailed for traffic offences and drunkenness, and the townsfolk and traders, who were in the main thrilled by all the money the bikers spent, had no complaints at all. The famous photograph of a boozy biker on a bobbed Harley surrounded by empty beer bottles was in fact a drunken trucker recruited from an adjacent bar by a LIFE magazine reporter under orders to get a picture any which way.

Like other media, Hollywood has distorted a lot of history in its time, but a few of the biker movies turned out in the fifteen years between The Wild One and Easy Rider reflected the evolution of the emergent biker and outlaw biker culture with some accuracy. 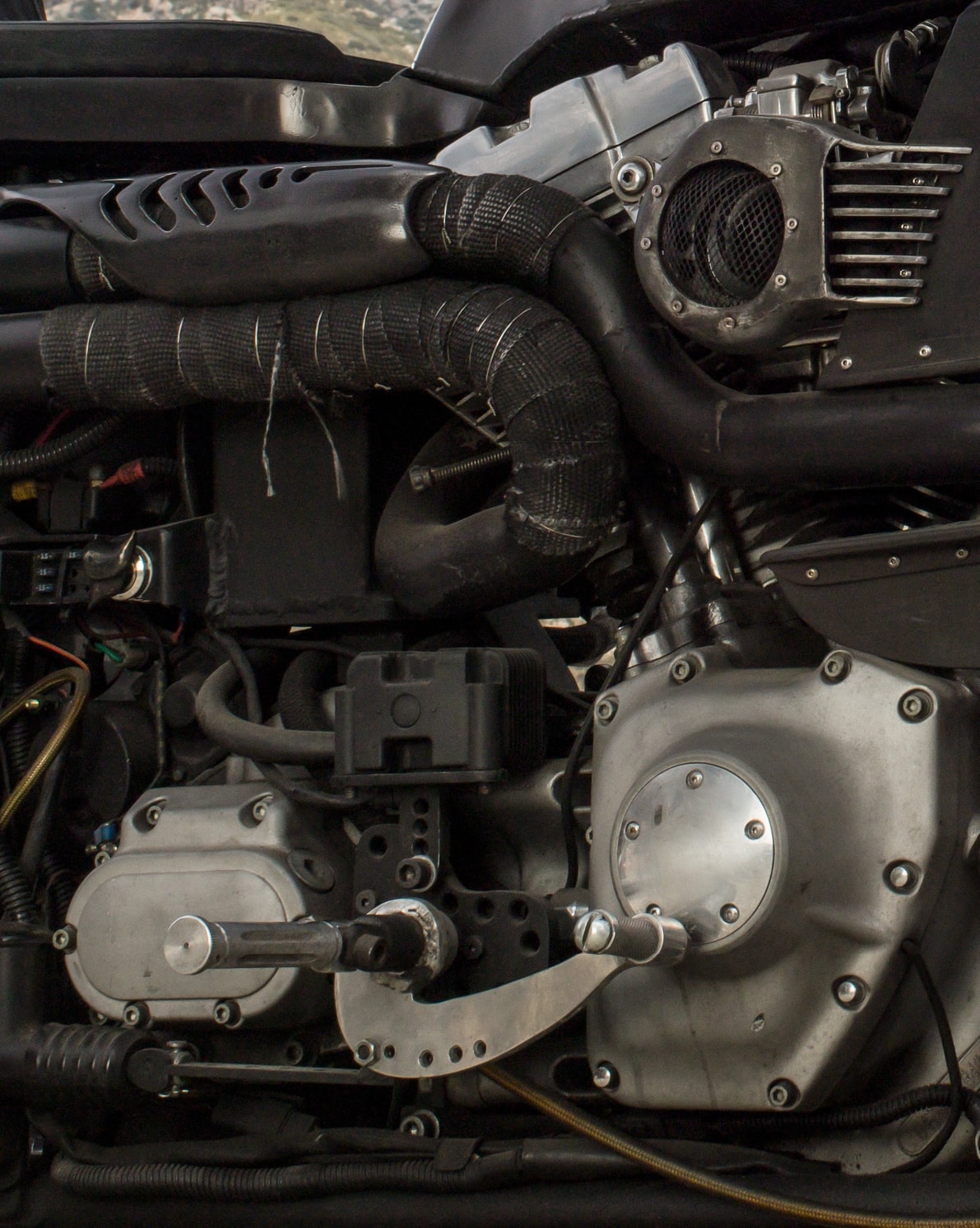 Jack Smith’s underground movie Flaming Creatures, released and banned in 1963, captured the essence of American outlaw bikers as they really were before they grew beards and stopped cutting their hair. Filmed in a grainy documentary style, Smith’s bike gangsters, with their crew cuts and DAs, flying jackets, baggy trousers, and their war souvenir Iron Crosses and Waffen-SS belt buckles were very real. Supported by members of the Oakland-based chapter of the Hells Angels Motorcycle Club, Hells Angels on Wheels with Jack Nicholson gave viewers a glimpse of a gritty reality somewhat removed from the increasingly unlikely and bizarre storylines of offerings like Cycle Sluts from Hell, in which young men are gangbanged by a coven of distinctly unfeminine biker women. The sisters-on-cycles top off their antics by decapitating a rival gang chief after taking him drag racing in the most literal of senses.

Easy Rider took a very diluted version of outlaw biker culture and crossbred it with the new hippy drug culture. It also gave youthful audiences two just-dangerous-enough anti-heroes who end up dead beside the road to nowhere. But not before they had a chance to roam wild and free on their bikes with no responsibilities to hinder them. A new generation of rebel bikers duly roared onto the highways but they didn’t scare Middle America as much as the young tear-aways who’d shoved the ghetto up Joe Straight’s nose two decades earlier. Middle America had other concerns, like the escalating war in Vietnam.

The motorcycles are allegorical stand-ins for the horse and the heavily romanticized image of the wandering cowboy of North American lore.

The 1966 Roger Corman movie, The Wild Angels, offered a stronger message than Easy Rider. In Corman’s bleak story, people are imprisoned by circumstances from the cradle to the grave. Infants are dominated by their parents who spend most of their adult lives in traffic jams before dying and finishing up in cemeteries surrounded by fences. Against this depressing background, Peter Fonda’s outlaw gang chief, Heavenly Blues, leads his tribe in search of freedom. Where Brando’s Black Rebels gang were just disaffected youths on bikes thumbing their noses at authority like naughty street urchins, Fonda’s Wild Angels are serious deviants who think nothing of holding an orgy around the dead body of a comrade in a church, a comrade they killed, albeit by accident. It steadily dawns on an increasingly disillusioned Fonda that his alternative world is probably worse than the one he and his gang rejected, but it’s too late to go back. His realization that “there’s nowhere to go” sums up the reality of life for most outlaws and dropouts: they have nowhere to go, which is why they join gangs in the first place. 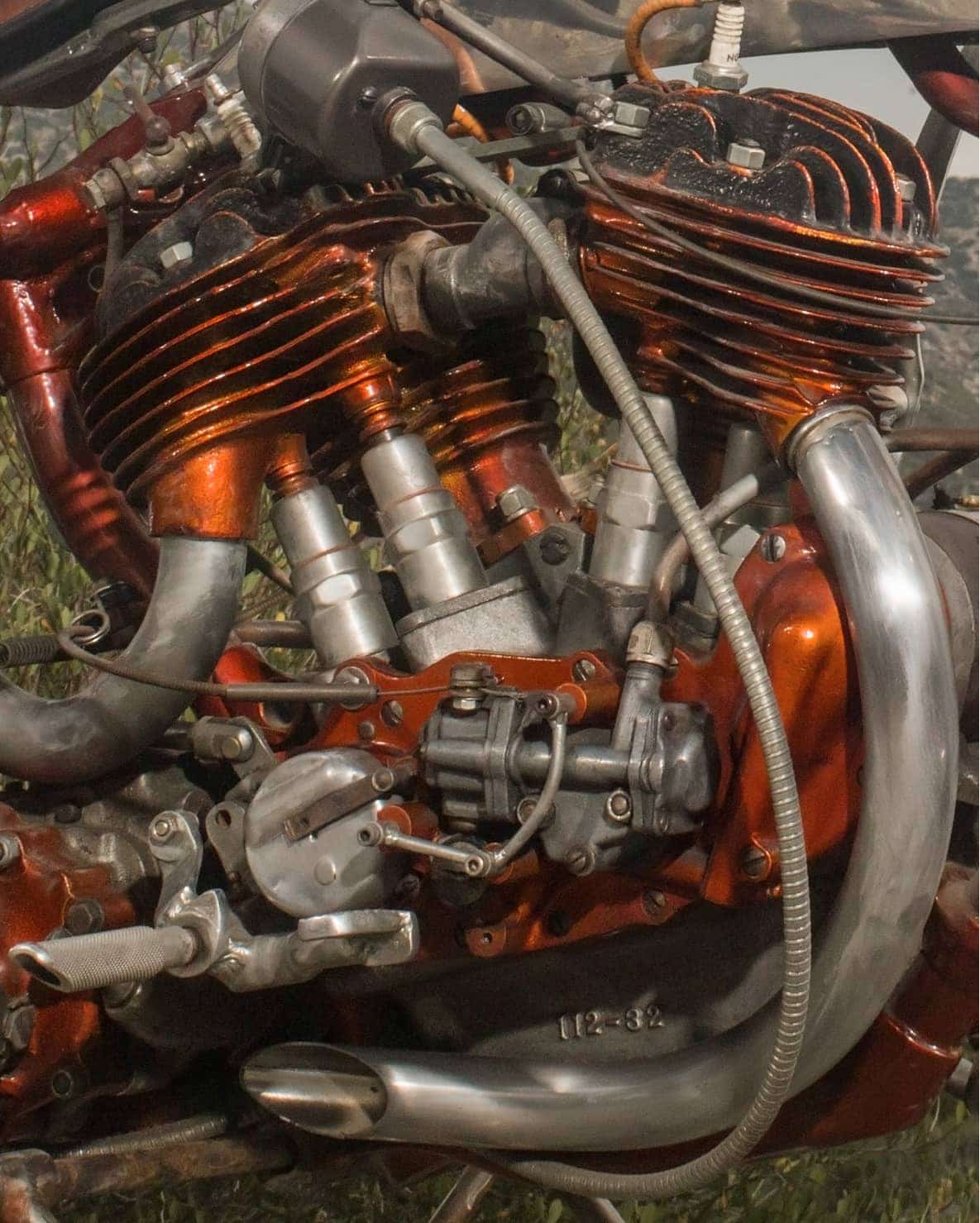 Predictably, The Wild Angels was a box-office flop. For many people, the biker lifestyle offers an escape from the drudgery of the modern grind, a return to The Old Ways, or a fairy-tale version of old ways shaped by popular fiction with a lot of help from Hollywood. The commercial success of the excruciatingly inane 2007 biker movie Wild Hogs proved the point that Joe Normal has always preferred his daydreams without reality. And who can blame him? Legendary chopper builder Ed Roth once said of the Hells Angels: “They’re the last American heroes we have, man.” That was before some local Angels, upset with Roth for selling out as they saw it, filled him up with LSD, sat him behind the wheel of his car and launched him into the Southern California desert. Whether Roth changed his mind afterwards is unclear but he was lucky to survive. Others who have incurred the displeasure of the HAMC and similar gangs have not been so fortunate.

There are those who suggest that Wild Hogs is the Easy Rider of our times. Yes, indeed, Peter Fonda appears in both movies, the motorcycles are allegorical stand-ins for the horse and the heavily romanticized image of the wandering cowboy of North American lore, and the protagonists are looking for freedom and the real America. However, in Easy Rider, Fonda and Hopper find it at the end of the movie in the form of a pick up containing a pair of homicidal redneck inbreeds who blow them and their Harley-Davidson choppers away in a hail of 12-gauge after Hopper rather rashly flips them the finger. Nobody dies in Wild Hogs.