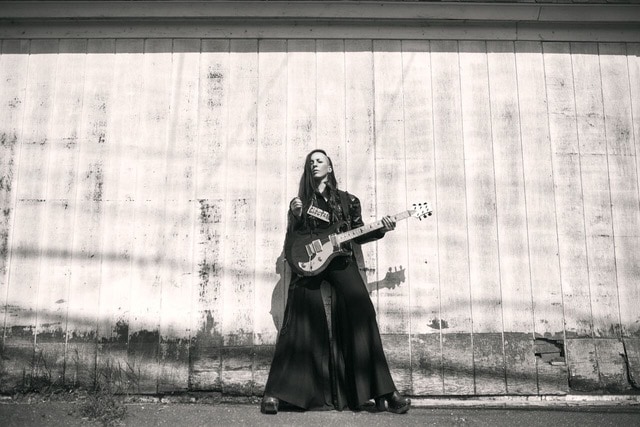 If you don’t know who Donna Grantis is, you might know her music and if you don’t know her music, you just might know the names of some of the people who she’s played guitar with like Prince (yeah, that one) or Mike McCready of Pearl Jam. On stage, with long black hair, leather pants (sometimes tight, sometimes super-wide bellbottoms or in a flowy dress and heels) and chiseled features, Donna Grantis looks legit guitar player. Her hands move almost invisibly over her guitar, coaxing sounds from the instrument with an effortlessness that only comes from years of practice. Her face often sports that concentrated musicians look with a difference. There’s a confidence about Grantis, it comes across in her playing, she has this look that lets us know she’s got this and that she’s having a blast. She’s playing the guitar, it isn’t playing her and she can make it sound like oh so much more than an electric guitar.

Okay, Grantis has played with Prince and Mike McCready and they influenced and impacted her career but Grantis believes her role as an artist “is to continuously create, evolve, and move forward.”

I caught up on the phone with Donna a few weeks ago after her workout to talk about her new album, DIAMONDS & DYNAMITE and to get to know the artist behind the complex instrumental album. She was hanging out in her kitchen and I’d like to think that if I had been there, that’s where we would have been chatting.

I am having such a good time because usually, with guitar faces, it can be hard to tell it’s so much fun.

On knowing she was a musician

When I was 14, and when I got my first electric guitar, I knew that I wanted to be a musician, right away. When I was 18, I had saved up money to buy my dream guitar, after that I had decided that I did not want to have any other jobs ever again if it was not related to music. Since then, that’s been the case, it still is.

As a teenager, I worked at a family restaurant for a while, and got great tips, and saved up to get my dream guitar, which is still my main ax. It’s a Paul Reed Smith CE22, purple, has a whammy bar. It looks and sounds beautiful.

It’s a lifelong pursuit and development. I was a student of music, I studied in school, and after that point just did everything I could to make a living playing, whether it was playing in eight bands at a time, being a session musician, recording, leading my own group, being a musical director for different projects. I did that until I got the call to jam with Prince, and then things really changed.

So, You Pick up the Phone and Prince Is on the Other End?

Prince saw some videos that I posted on YouTube. One was from a gig that I was playing with a jazz fusion group I was leading at the time. It was recorded at a great club in Toronto, called The Orbit Room during the Toronto Jazz Festival and we were playing a classic fusion tune by Billy Cobham, called Stratus and I later discovered that that’s a song that Prince was regularly covering. We ended up covering it quite often with  3RDEYEGIRL The other video that he saw of me was at an event for PRS Guitars. I was playing an original song, and it’s crazy that the song that he checked out was called Elektra at the time, and that’s the song that he rearranged to become Plectrumelectrum which was the title track of the Prince and 3RDEYEGIRL album. 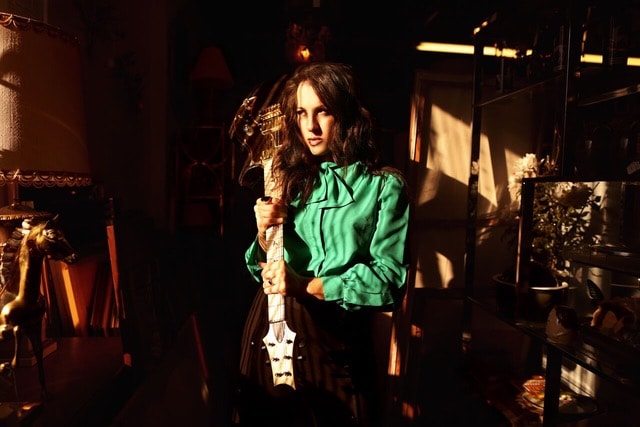 The album is greatly inspired by what went on personally, in my life, over the past few years. The direction of the record was really influenced by Prince. Before we’d hit the stage with 3RDEYEGIRL, on his request, the song Recollections, from the album Big Fun by Miles Davis, often played in the PA at venues as fans took their seats, just to set a tone before we would hit the stage. That album opened up a whole new world for me of music that was made by Miles in the 70s, during what’s referred to as his electric period. What’s so cool about it is that it’s really improvisational, which I love, but there’s a rock attitude behind it.

The music from that time period is pretty chaotic at times, and that really resonated with me, especially during the pretty tumultuous time of 2016. I was listening to those records a ton. Also, the last band that I was jamming with, with Prince, was an improvisational group, and we played some pretty standard funk R&B tunes, but we really played them out and took them to some experimental places. I love experimenting with different sounds and effects and collaborating with musicians on stage— just reacting in the moment. So, these compositions really are inspired by those things.

Finding her Sound as an Artist

That’s definitely what I’m trying to do with this new record, is reveal the music that appeals to me, and that speaks to me as a bandleader. I think collaborating with Mike McCready, and playing with Prince, is something that has really influenced me a lot, and has definitely shaped me as a player. I like to think ahead, and I like the idea of my focus, and as much as possible, the focus of writers, to be on what’s being created now.  This album that that will really introduce people to, perhaps, more of a personal voice, compositionally. Definitely, when I’m collaborating with others, I feel like I always play true to my interests, and what I’m feeling, and I try to add my voice to the mix. But I think, compositionally, when it comes to the new songs from Diamonds & Dynamite, and also just as a bandleader, that perhaps it will reveal some new parts of musical personality to people.

On what to Expect on DIAMONDS & DYNAMITE

Instrumental music makes up about ninety percent of what I listen to, that’s the thing I’ve always gravitated towards.  I’m looking forward to people hearing these songs, and hearing the music, and learning a little bit more about my musical background, and, yeah, musical preferences.