Way Out Of Town With
Sailing Collective

Photography and Video by William Kaner
Written by Erik Rasmussen

Ihave seen blue suede water and an acid-trip sunset. I have laid in a coffin-width berth and been rocked to sleep by the sea. I have chosen a morning swim before coffee. I’ve felt the force of forty-five-knot winds in open water and fled from looming thunderheads. I have tacked across the Strait of Bonifacio crossing, at some invisible point, a boundary between nations. I have whistled over water so calm, beneath a night sky so silent, I could breathe deeply twice before the echoes faded. I have heard new music, learned new stories, and tasted new foods. I have literally seen purple mountains’ majesty, on Sardinia’s paper tear horizon. I have peed into the wind — once. I have made connections with new friends.

I have learned to sail, at least in theory, if not application. Guests on board a Sailing Collective chartered yacht hear a lot of theory, specifically when Dayyan Armstrong captains that boat. Armstrong’s studies of music theory in college before founding Sailing Collective in 2011 points to his penchant for elucidating often counterintuitive details of the forces at work under sail (the concept that our ship is essentially sucked forward by wind, not pushed from behind “like a spitball,” was cheek-raisingly puzzling). Or, it could be seafaring’s enormous contribution of terms and phrases to the English language that colors the captains and crew of Sailing Collective’s gifts of communication. Either way, the learning part of sailing is fun, even if learning to sail is not entirely the point of traveling with Sailing Collective. 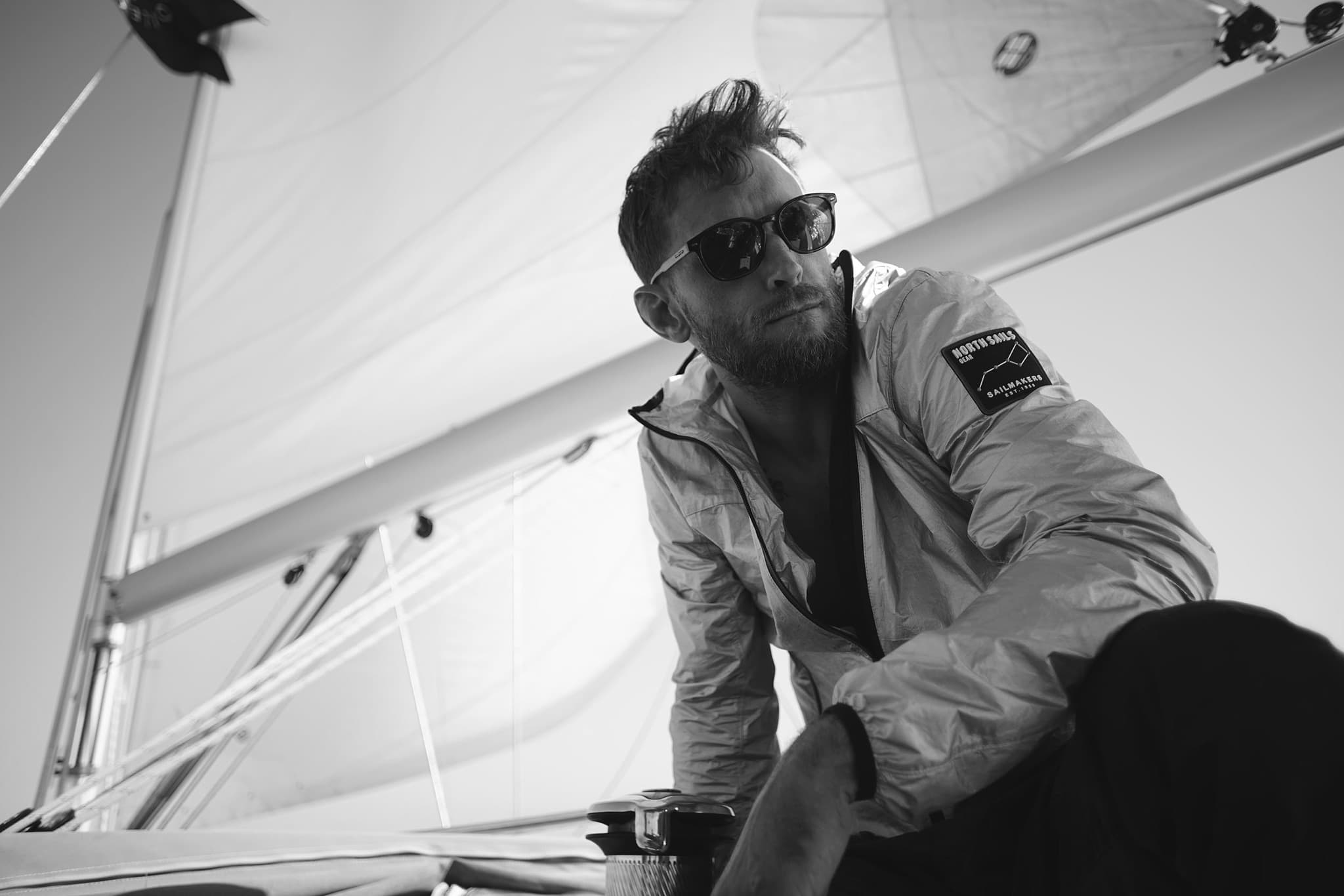 “Sailing Collective is a travel company that builds experiences through voyage at sea,” says Armstrong. “A team of captains and chefs are at the pinnacle of the journey, guiding the experience of the travelers. Our ethic is: Life is art and there’s an art to travel. It’s our mission to make the connection meaningful.”

The bones of that mission are the itinerary. Sailing Collective has dozens to choose from. And before guests — or “homies,” as Armstrong often calls them — step foot off of land, they meet with a Sailing Collective captain to curate their route and manage expectations.

“Although curate is sort of the antithesis of what we do,” Armstrong is quick to point out. “It’s more like choose your own experience. This whole thing is participatory. You can party, sit below deck, and just let the captain and chef do what they do. Or, you can winch sheets, actually sail, and notice this amazing rock formation. Itineraries are tentative. Mother nature makes sure of that.”

I met with Armstrong a week prior to my eight-day sail as part of a collaboration between At Large and Sailing Collective. We (ever so tentatively) planned our journey. Where would we overnight, by anchor, mooring, and in which marina? Which beach was accessible by dinghy; to which primordial archipelago could we swim? We decided on our meals aboard, which restaurant in what city, even our drink preferences, and when and where were the best options for actual sailing. Armstrong, he told me later, was also slyly getting a feel for who we were in that first meeting, so that he and the chef on board, Sandy Ho, could provide “a totally chill environment.” Personally, I had a magazine to edit, a travel issue no less, and I wanted to set my bearings on the most important “W” of five travel questions. But first, we had to journey. 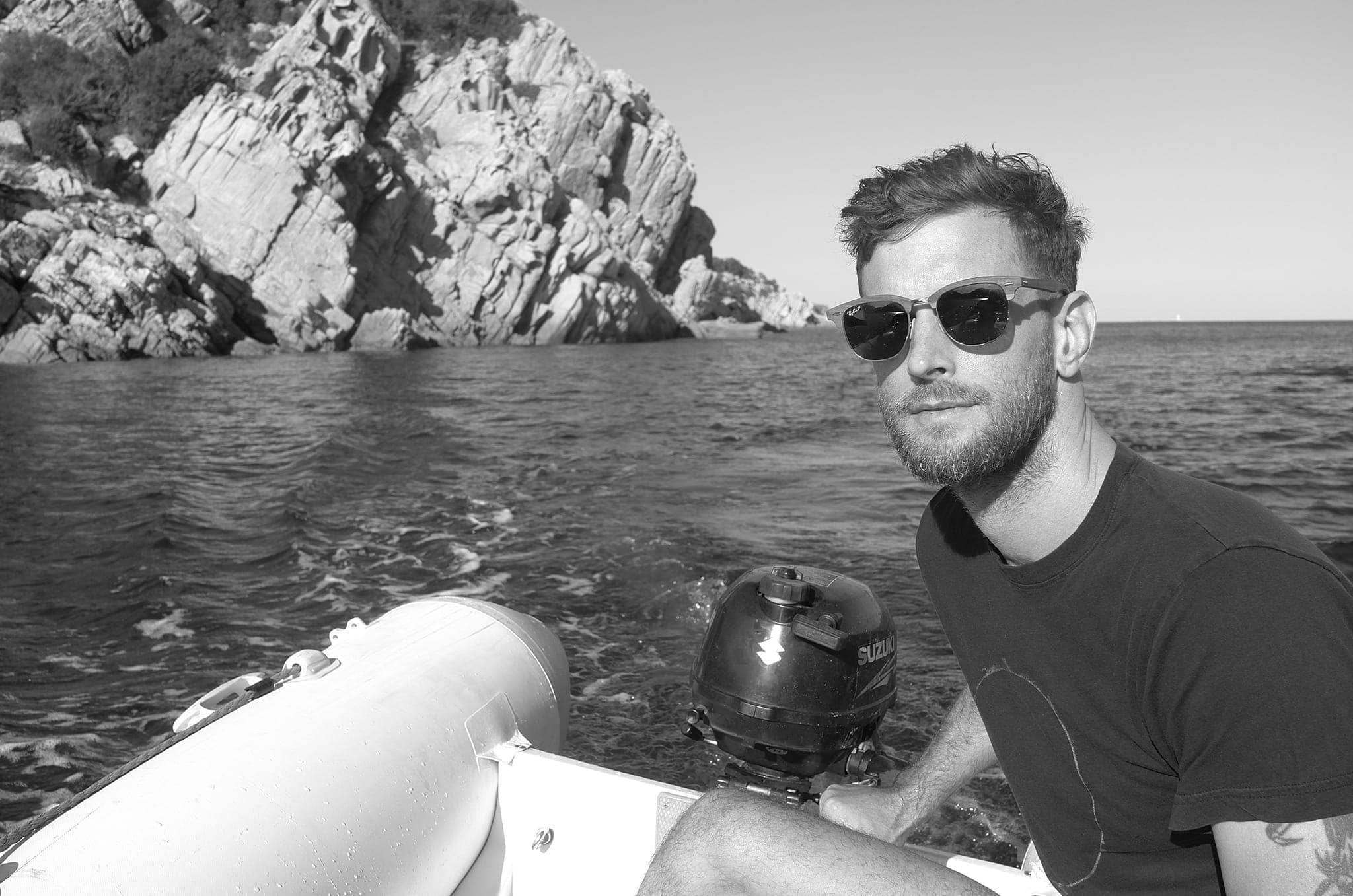 Travel is useful, it exercises the imagination. All the rest is disappointment and fatigue.

— Louis-Ferdinand Celine, Journey to the End of the Night

Who? We were eight homies aboard a fifty-three-foot yacht named Anita. Before embarking, I only knew William Kaner personally, our photographer and a serious traveler in the sense that he travels frequently, often alone, to places largely ignored, both professionally and just curiously, and with a passport heavier in stamp ink than paper. Most of the others were either dear friends, or at least familiar.

What? The majority of us, as with many Sailing Collective guests, had little sailing experience. Kaner had done some sailboat racing as part of a team. I’m from Long Island, where I spent summer days blistering aboard twenty-foot skiffs, raking and culling clams, and regurgitating my lunch into the Long Island Sound. Seasickness was not a minor concern for the homies aboard Anita that first day. A great deal of discussion was had about its prevention and treatment: watching the horizon and filling your belly consisted in the former, plunging into the water was the whole of the latter. Aside from briefly airing and allaying our fears, what we were there for was to relax and to sail. 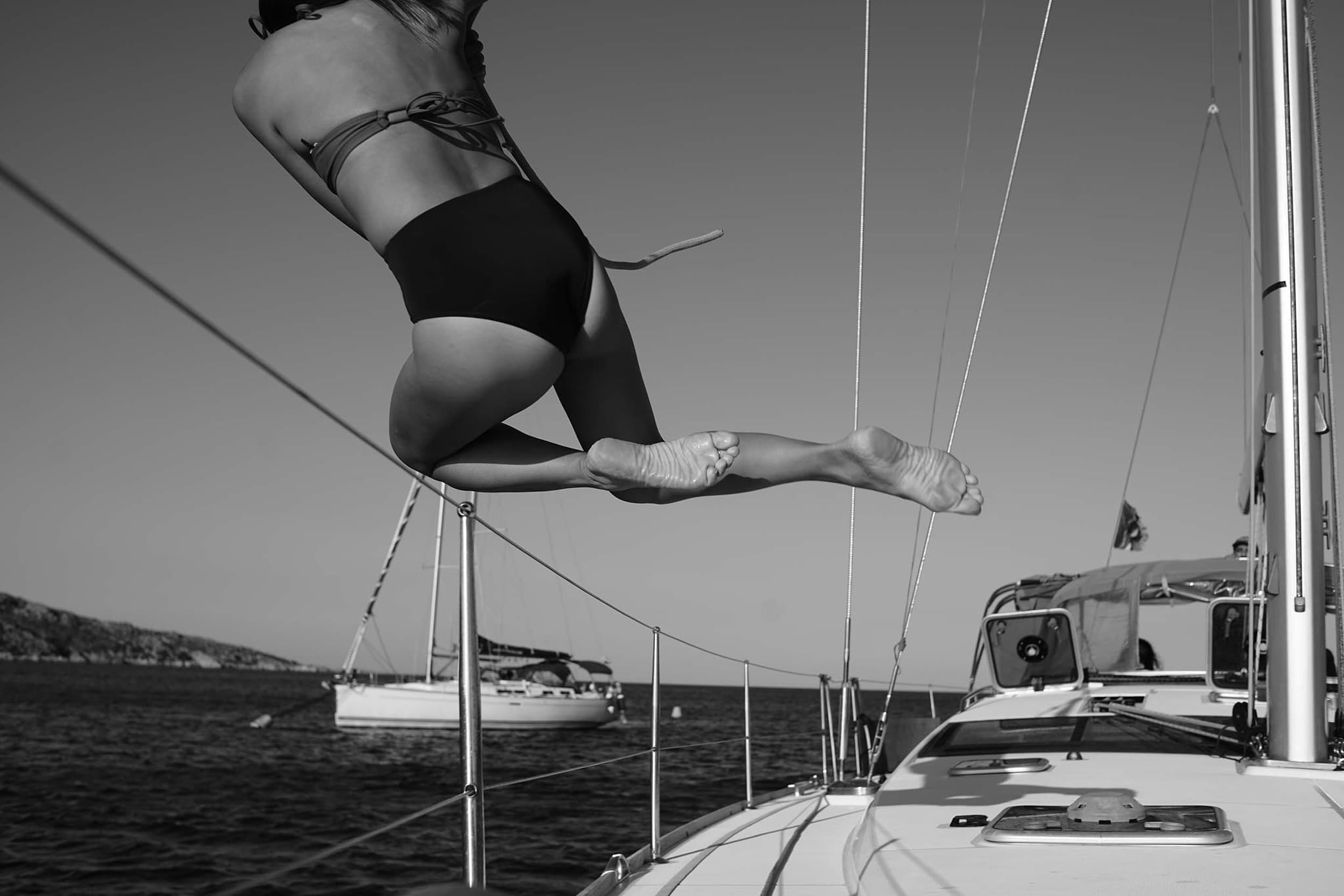 When? It was the best time of year, according to Armstrong, according to — I’m assuming — most occupants of the northern hemisphere. The first week of October. The days are hot, the nights cool, and the seawater seemingly preset for your personal comfort. Plus the tourist season has plunged and the mistral, the strong northwesterly winds blowing from southern France, is up. Ideal conditions for “a good boogie,” says Armstrong.

Where? The Sailing Collective website lists our voyage as “Sardinia & Corsica Itinerary,” respectively Italian and French Mediterranean islands, though if you refer to Corsica as France while in Corsica, to a Corsican, you run the risk of suffering a vehement and highly accented history lesson, or at least a good snub. We started in Italy, Sardinia to be accurate, Portisco to be precise. From day to day our destination was unfixed; it was a suggestion; it was somewhere in the direction the bow faced. The places and the getting there were gloriously synonymous in the blue-hued expanses of the Mediterranean Sea. Of course we did anchor, eat, swim and overnight in the places we had planned back in the Sailing Collective’s Manhattan headquarters, and safely thanks to the good captain. I have the names and cold coordinates written down in a notebook. When I read “Isola di Magdalena,” I remember Armstrong’s silhouette set against a bank of black clouds, and lighting zipping across the sky. When I read “Porto Palma,” I see a regatta swarming around us. And that night, when the fiercest winds of the week blew, I see the anchor chain at a ten to one ratio, slicing through glass-faced sets while our boat fishtails from her windlass. When I read the name Corsica, “Bonifacio!” rings in my ears. Bonifacio: The fortified cliff-side city overlooking the waters, and a hell of a fun word to say. We sung its name in celebration, chanted it while opening bottles of wine and before every meal; we shouted it in greeting to passersby. “Bonifacio!” on any tongue, in every accent, for any happy occasion — a blessing in five syllables. 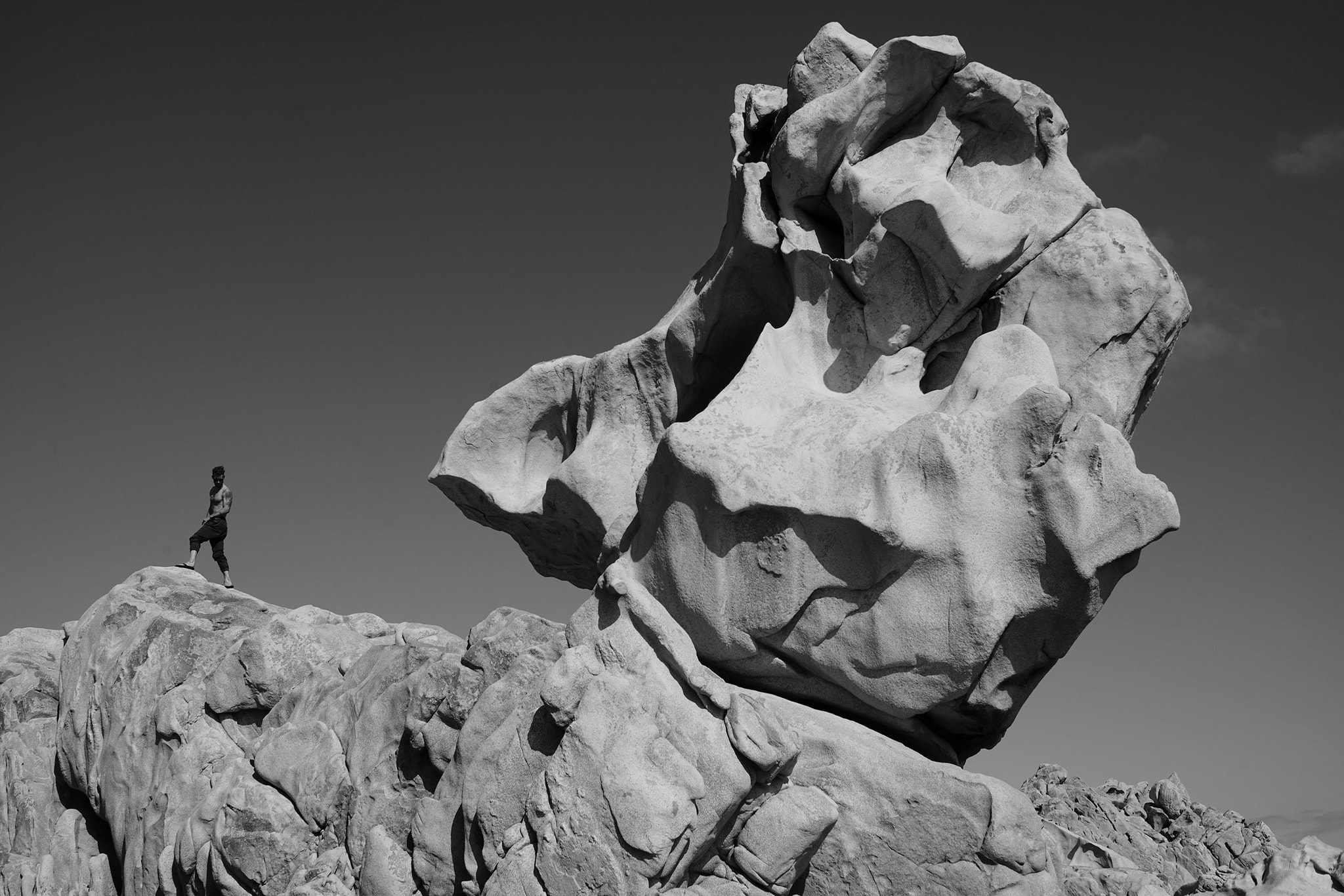 But then, why? That’s the important one, the human question; when the act of moving from one location to the next is not serving some grave and immediate need. The answer to “Why do we travel?” may come down to this: being there is always here. As in Céline’s exercised imagination. As in we can be anywhere, as long as we’ve been there before, emotionally. And descriptively, you can bring a guest. You can be on the boat together, on a sea of Célinian disappointment and fatigue, crying out “Bonifacio!” over beers. If that’s not reason enough to travel, you really need a break.