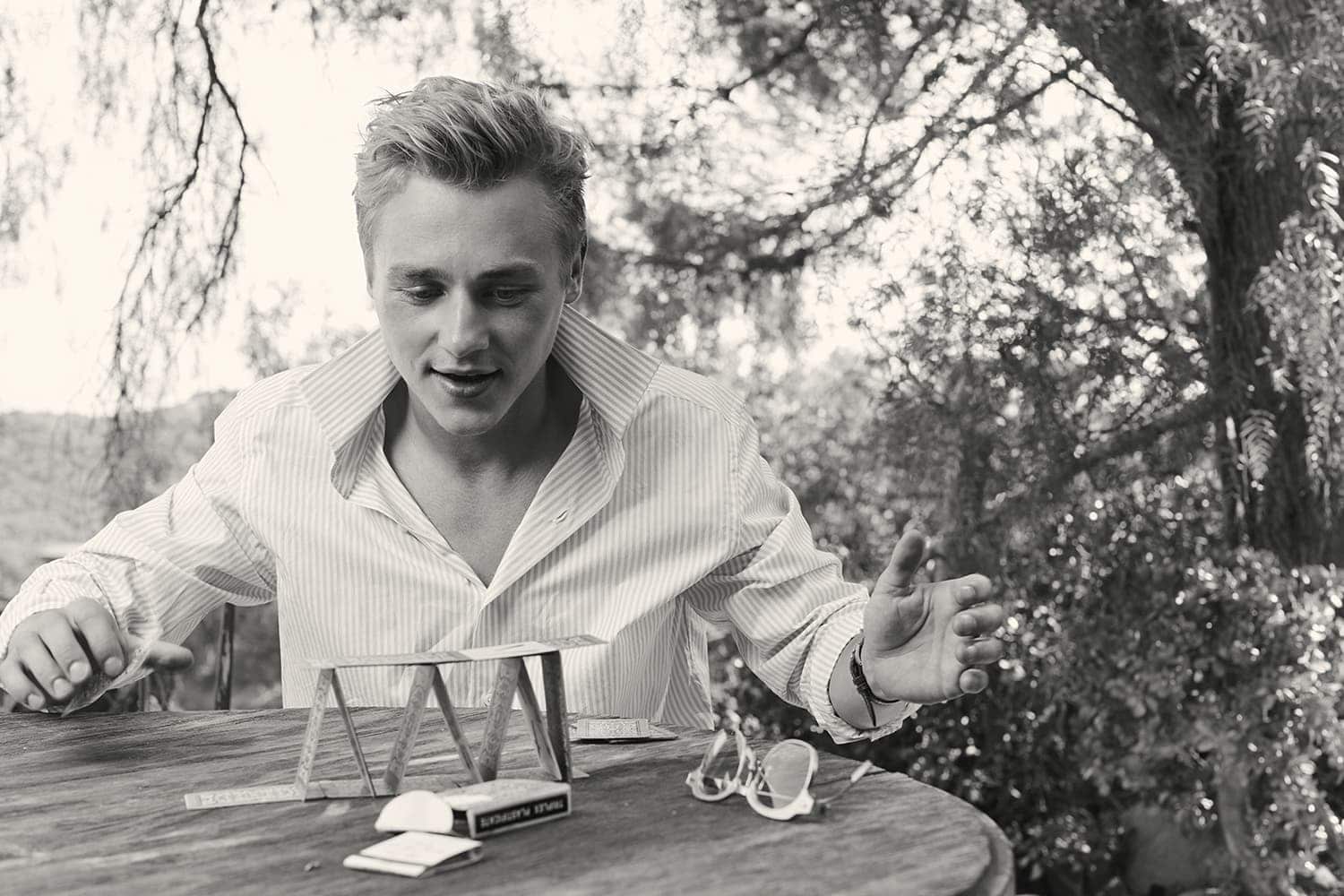 Hall Sullivan You’ve worked in television and now a couple of movies under your belt. Tell me your thoughts on the TV renaissance, do you think there has been one, if so, why and who, in your estimation (or what shows) were the progenitors? And has that changed or influenced your thinking on TV vs Film?
Ben Hardy Part of the reason I’m an actor is because I loved those shows. The golden age is truly occurring. I’m thinking of how prominent film actors like Woody and McConaughey took on True Detective. I would love to go to tv in one of those shows. The Wire and Sopranos are, of course, the shows that kicked off the golden age. They were amazing.

HS What do you think about the proliferation of content via online platforms like Amazon and Netflix? How does this affect you as an actor?
BH I’m working with Netflix now and they’re great to work with. Apple is coming out with a platform as well. I’m worried we will lose cinema. Films will become less cinematic. I don’t want the theatrical release to be discontinued—the experience of going out to a show, opening night, any night. Perhaps I’m a bit old fashioned, but I don’t want to lose that.  I mean, think about the Revenant on Netflix vs on a big screen. Can you imagine not having that cinematic experience?

HS I agree. I’m totally with you on feeling a bit old fashioned about it, but I think it’s not simply antiquated tradition. There’s something to being enveloped and to the format of sitting straight through a piece.
BH Exactly. I’m not sure about people in my generation, but that’s how I feel. Now, the way people consume content is in chapter format, bit by bit vs sitting for a longer form piece that requires your attention for two hours or more.  Again, maybe I’m old fashioned.  Pausing a movie is like popping off in the middle of a roller coaster.

HS Speaking of film, Bohemian Rhapsody. That’s coming soon. Can you tell us a little about that and your relationship with the music prior to filming? How did you end up in this role?
BH Being British, you can’t really not know Queen. It’s just part of your heritage. You just get to know it through osmosis. I was born a year before Freddie died, but I still just know the music. I didn’t know it as in depth as I do now. One of my favorite songs is White Queen (As it Begin) which is on the early tracks. If you actually mine Queen, the early albums, though lesser known, are really, really good. 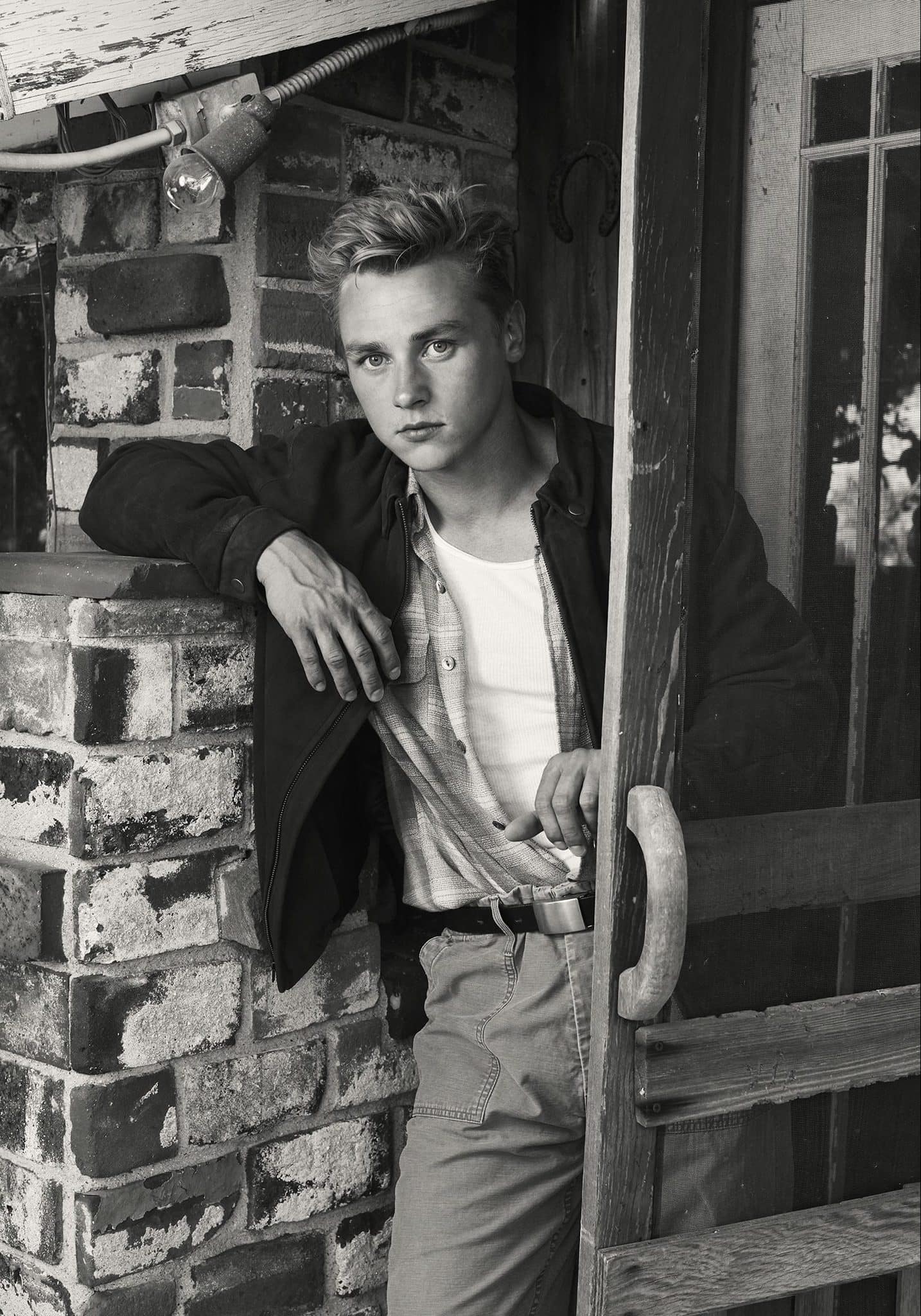 So about how I got into the roll, which is a good question, I heard about the movie and heard Bryan Singer was directing. I reached out to him though I’m not one to do that sort of thing. I have nostalgia for rock and roll, that era. I felt like I could play a part in that. I spoke to Bryan and he was up to the idea but was worried about me not being able to drum. So, I told him I could drum and bought a drum kit and had a lesson every day trying to learn this one song to put it on tape to send it to Bryan.  I worked on it for hours every day and was a wreck as the deadline to send the tape loomed. But I said to myself, ‘what you can control is trying as hard as you can and if you do that and it doesn’t work out, you can live with the results. But if you don’t work hard, that’s the worst. The regret.’ And I sent him the tape and he liked it.

HS: Can you talk about the work vs fun aspect of filming this movie? One, you’re playing a top 10 drummer of all time who is still alive (a lot of pressure, maybe?), and on the other hand it’s a movie about a famous rock band so what could be more fun?
BH Well, yes, it was a combination of work and fun. Bryan thought I’d be playing two songs in the film. Then he got the script and it was thirteensongs. It was a lot of work. I built a drumming booth in the house I was renting. Sound proofed it. Spent all day every day in there. I was having lessons from a very talented drummer—Brett Morgan—whenever we had time around rehearsals and shooting.  It was a lot of work. But how many people say they wish they had the time to a learn a musical instrument? It was my job to learn the drums—and I had a lot of fun doing it. The motivation was already there. I didn’t have to manufacture that. It was quite stressful trying to learn everything in time but now I have a new skill that I wouldn’t have had.

And it was daunting and I was nervous about playing, Roger Taylor, the drummer.  I had experience managing expectations for a fan base before with X-Men. Just trying to approach it as having faith in my own interpretation. The nature of subjectivity means there’s always going to be someone who you won’t make 100% happy. All you can do is present the interpretation you want to give – the rest is out of your control. I was definitely nervous about it, though. Especially meeting Roger himself. But he was just so supportive from day one. No judgment involved. Giving us anecdotes and talking about the band’s relationships. Having them on board was a massive boost. I had their approval and they liked what we did and they thought Freddie would have liked what we did. I’m very grateful for their support and advice. 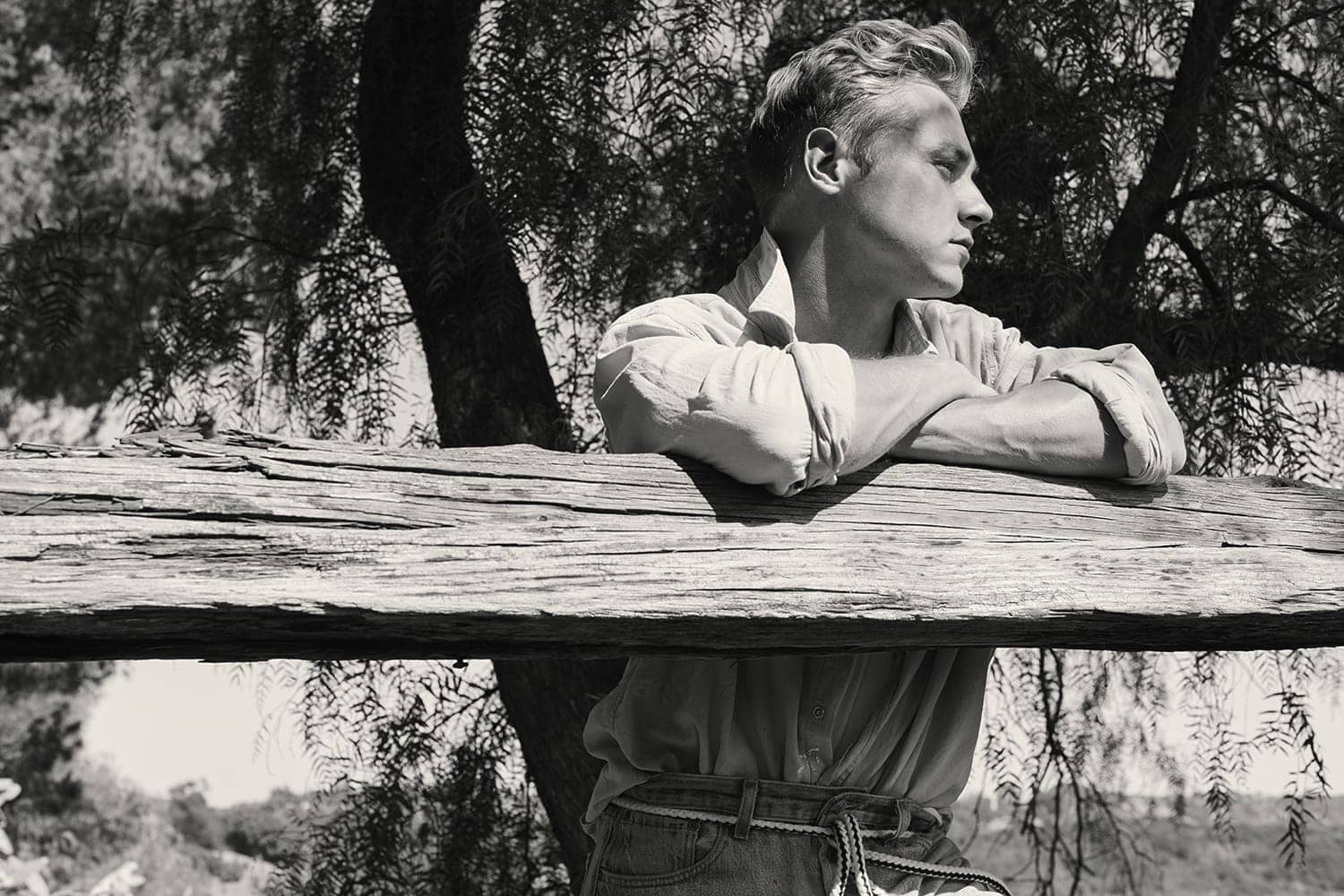 HS How much were you able to consult Roger Taylor?
BH As close as was kind of possible. He was on tour a lot—they’re still rocking out all over the world. Roger Taylor gave me a little drum lesson at Abbey Road studios! It was surreal, a bit of an out of body experience.”

AH Wow. Incredible experience, for sure. How much Queen did you listen to?
BH I still listen to the music. I was binge listening six months before and while we were shooting. And I still listen to it and I listened to Queen this morning. You’d think I’d had enough but I haven’t.”

HS Based on some of your other interviews, it seems like you might have been happy to play an edgy character. Are you looking to play more challenging, in all sense of the word, characters going forward
BH In drama school I played Orlando and Romeo—I was always the leading male in a nice guy sort of way. Which is good and I’m grateful for the experience. To me, they’re quite boring parts to play. The lover. It gets so old. I want to play as diverse rolls as possible. I was surprised when I got Arch Angel. I was thinking it was so cool. I’m playing a villain? This is great. I’d like a variety of roles. I was just trying to get whatever work I can get. That’s what they tell you in drama school. I’ve been very fortunate. I just want to keep pushing in that way. You see people playing roles they always play but for me that would be mundane. I want to pursue jobs that scare me. Challenging and pushing myself.

HS How dark or what kind of complexity next?
BH Well it all comes down to the script. So, I want to do the best work that’s out there and work with great people that I’m gonna learn from and hopefully it will be through a variety of roles on the way. 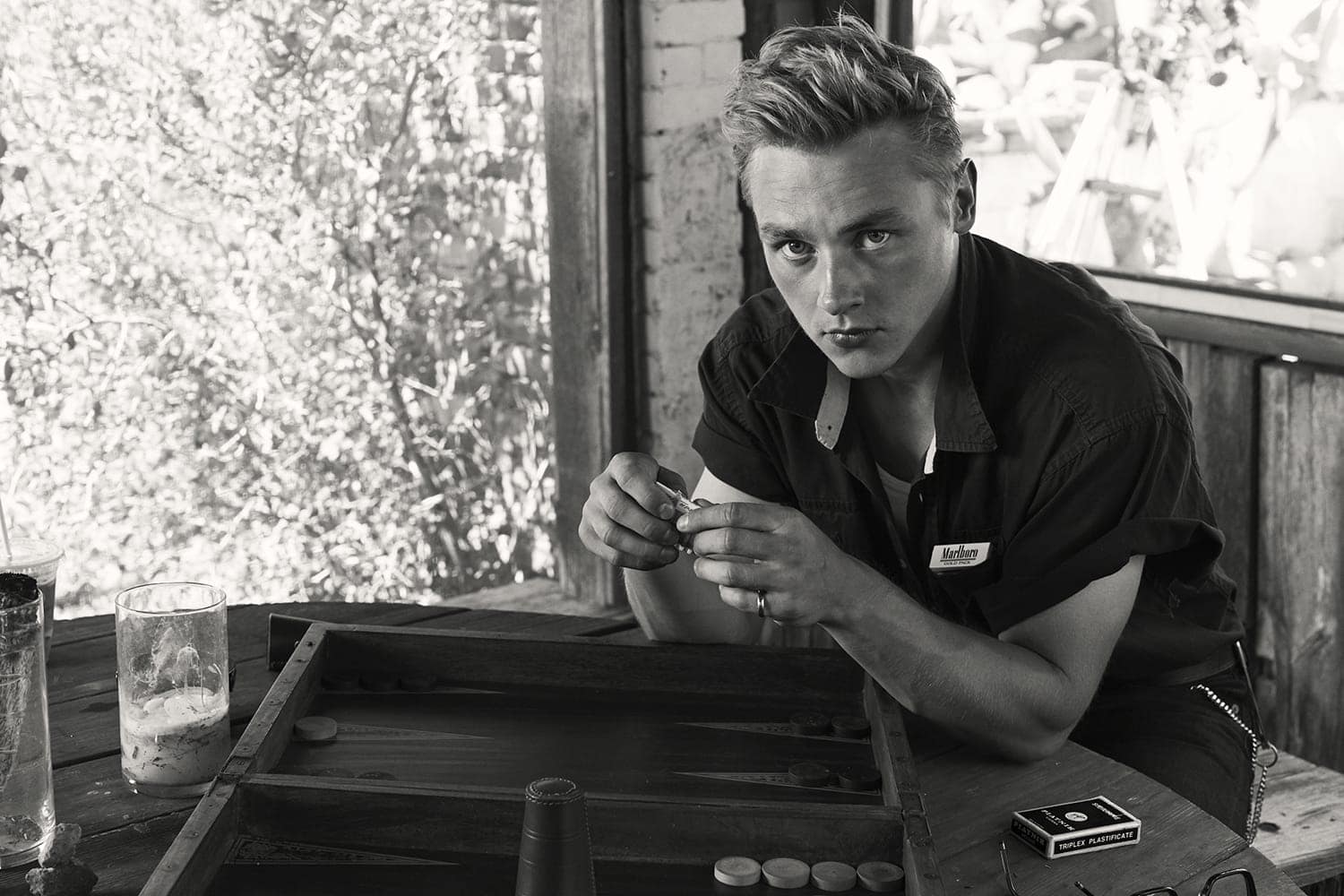 HS A natural evolution of self.
BH Completely. You want to learn from people and it makes them better and you better creatively.

HS Now, in terms of acting, who do you look up to craft wise? Do you have an idol?
BH  It changes. I definitely admire other actors and other great people. I feel like I learn most with the actors I’m working with on set. The process. In terms of mentor, I wouldn’t be doing this today if I didn’t have my HS teacher Rose Clark, Mrs. Clark to me, who inspired me and made me fall in love with it. I went to drama school and learned from a lot of people and there was no gospel. I think part of the journey is finding out what you think is good. No one can tell you precisely what is great and what is not. Taking bits of advice and lessons from people along the way and also having confidence in your own ability and opinion and what you think in how you want to be and what you want to be. So, yeah, there’ve been people along the way who have been incredibly helpful. Marlon Brando is someone I look to, Dustin Hoffman, Rob DeNiro and Al Pacino and why not learn from them all.

HS Do you have a mantra or advice you’ve received that has influenced you
BH I suppose I always tell myself, the situation with the drums, the easy option is to be like I can’t play the drums, fuck it, I’m not gonna do it. Or you can say what’s within my power. And I have a limited amount of time to do my best and at least you can try your best and walk away knowing you didn’t cheat yourself in the process.

HS I like that. Do you know where that came from?
BH Uh, I suppose just from endless auditioning. When you come out of drama school you’re auditioning all the time and there’s a ton of rejection. I just watched Bryan Cranston. He talks about the idea of presenting what you wanna present and what you think is good and being able to walk away doing what you wanted to do and there’s some power in that. The idea of trying to claim some kind of power where you really have so little. You’re just one other product in this industry of millions of people. You’re just one guy. So you can only present what you want to present and if you can do what you want, there’s power in that. If you did the work that you know you need to do to present the best version that you think is right, then you can walk away and be proud of yourself. 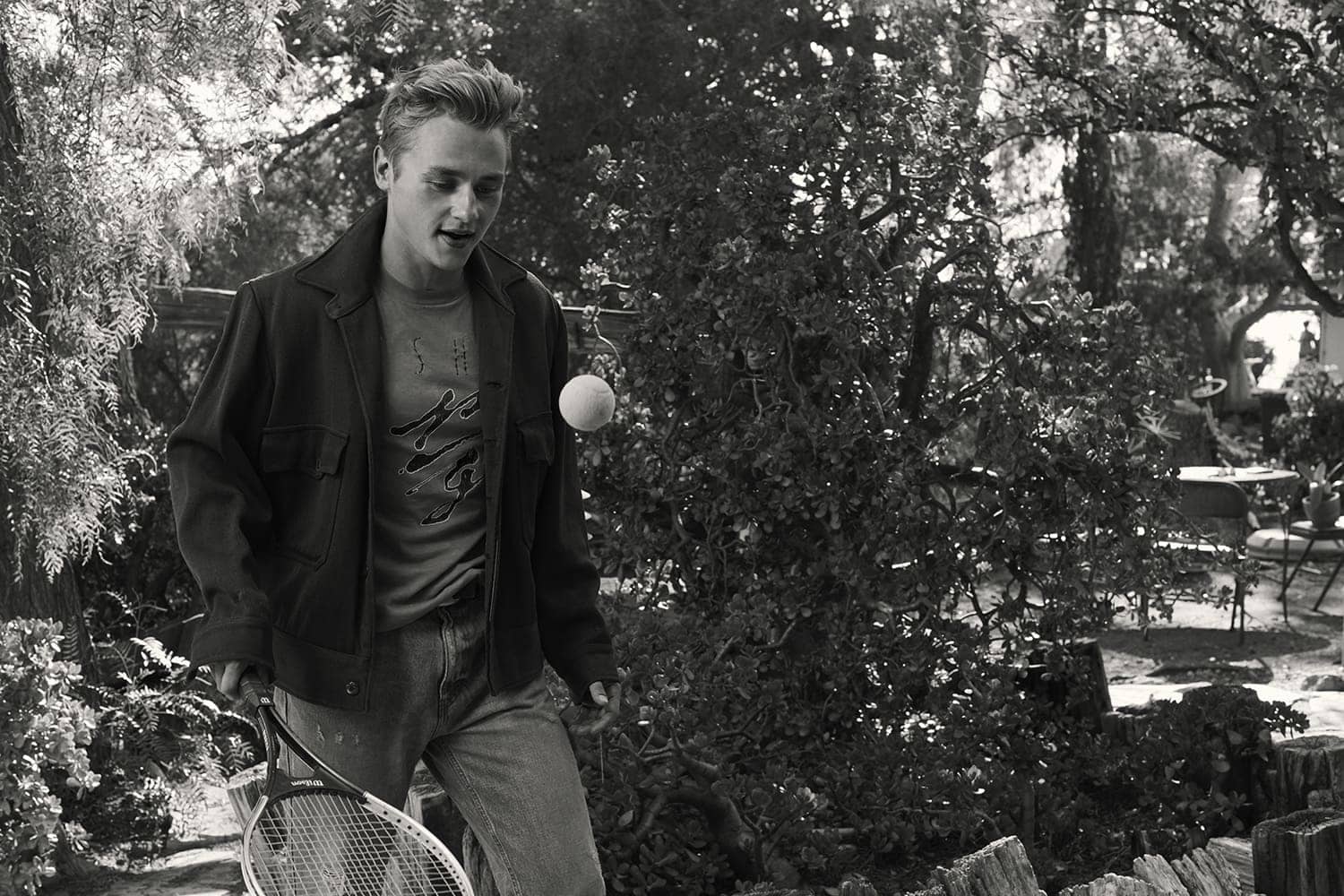 HS Since At Large is a men’s style mag, I have to ask, where do you take your fashion sense from?
BH I dunno. I appreciate high fashion and wearing a fancy suit and I’m chopped about it; I think it looks great. I love to dress well. But I’m the kinda guy that has to try to not be in tracks and something comfy. T shirts and bomber jacket—simple and classy…not saying I succeed.

HS As I mentioned, I’m a publisher and writer, so I like to ask about books you’d recommend? What do you read?
BH I have periods where I can’t stop reading and times where I can’t get through a single page— depends where my head’s at. I binge read Brett Easton Ellis recently. Less than Zero being one of my favorites. Kurt Vonnegut is another favorite author of mine.

HS What’s Next career wise? What are you aiming for?
BH I’m currently working on a Michael Bay movie for Netflix called Six Underground. I’ve never worked on an R rated action film before, so it’s new territory. That’s all I ever really aim for career wise—to explore a genre or character that’s different to what I’ve come across before, to work on projects that really challenge me and test my limits. It keeps it interesting.